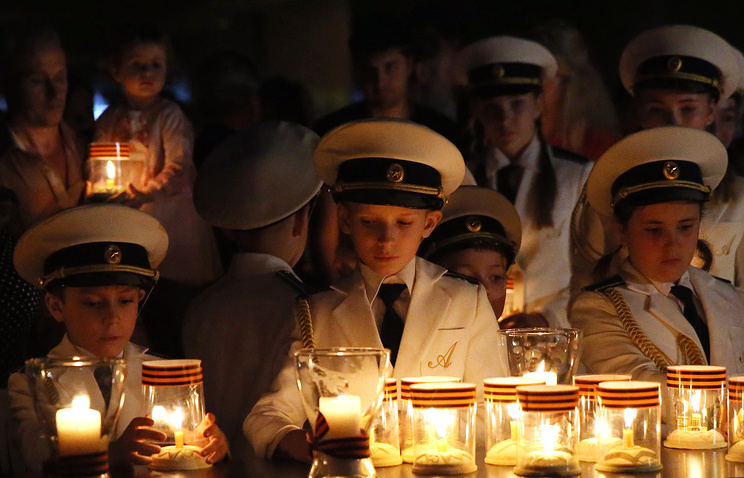 Today (June 22) marks exactly 75 years since Nazi troops attacked the Soviet Union. During the 1,418 days of the Great Patriotic war about 27 million of Soviet citizens were killed including 18 million of civilians.

In memory of those who were killed in that war Russia declared June 22 the Day of Memory and Grief.

Late in the evening on the eve of that date, Russians light candles in windows of their apartments and houses.

About 8 mln people took part in the Memory Candle campaign that was held for the eighth time this year. The number of candles, which is equal to number of days of the war, was lit in Moscow at the Poklonnaya Hill, in St. Petersburg on the Fontanka embankment, in Volgograd at the Mamayev Kurgan.

On June 22, all across Russia people will lower national flags. The authorities recommend television channels and radio stations not to broadcast entertainment programs on this day.

President Vladimir Putin is to lay a wreath at the Tomb of the Unknown Soldier in Moscow. The regions will hold meetings with veterans and other events dedicated to the memory of the victims.

Since 1994 the Memory Watch action is held annually on this day. It involves activists of youth movements, veterans, representatives of the Moscow government.

At 4 am on June 22 in the Alexander Garden near the Tomb of the Unknown Soldier lay flowers and honor the memory of the war victims observing a minute of silence.

Since 2009, when the Memory Alley was open on the Vorobyevy Hills in Moscow, on the night of June 22 people light candles and tie bells to branches of trees as a tribute to those who died.

The Day of Memory and Grief will also be marked by the Memory Train campaign. On June 20, veterans and representatives of youth organizations stepped in the train on the route Moscow-Minsk – Brest. On June 22, the train arrives in Brest where solemn memorial events are to take place.

On the radio famous Russian actors and presenters will read children’s diaries of the war years. They were written during the siege of Leningrad (now St. Petersburg), in ghettos and concentration camps, in the rear and on the front line.

Memorial events across the country

A night march, rally and the ceremony of laying flowers to the Monument to 1,200 soldiers-guardsmen will take place in Kaliningrad, Russia’s western enclave on the Baltic Sea.

The procession starts at 02:30 local time (3:30 MSK) – on this hour on June 22, 1941 Nazi troops inflicted the first artillery attack on Soviet frontier guards. The participants of the action will light lamps, which form the word “remember.”

In Novosibirsk, Siberia, the Novosibirsk Academic Symphony Orchestra is to perform the Seventh “Leningrad” symphony by Dmitri Shostakovich. The concert will be held at the square in front of the Novosibirsk Opera House as part of the International Peace Forum.

In Sevastopol, Crimea, at 3:15 MSK people are to light candles of memory marking the moment in 1941, when the first bomb fell on one of the streets of the city and took 19 lives.

In Sochi, the Rachmaninov String Chamber Philharmonic Quartet will perform works by Dmitri Shostakovich and Sergei Prokofiev, written in memory of the victims of the war. The musical program will be accompanied by a multimedia presentation of illustrations of paintings, drawings and posters of the Great Patriotic War.

Scientists from Russia, Germany, Australia, Ukraine and other countries will take part in a scientific conference in Rostov-on-Don, south of Russia. One of the main topics on the agenda is how World War II is now perceived by the world community.

In Kazan, capital of Russia’s Tatarstan republic, about 10,000 Muslims from different Russian regions will read a memorial prayer for the fallen soldiers. The ceremony will be held at the Kazan Arena stadium.

The residents of Ulyanovsk in the Volga Federal District will light 1,418 candles (number of days of war).

Memorial events will also take place in Kirov, Novgorod, Syktyvkar and other cities.

For the first time June 22 was declared the Day of memory of defenders of Fatherland in 1992 by the decree of the Presidium of the Supreme Council of the Russian Federation. In 1996, by the presidential decree it was renamed into the Day of Memory and Grief. Eleven years later it was put on the list of days of military glory and memorable dates in Russia, established by the federal law dated March 13, 1995.

In countries of former USSR

In Belarus, in 1991, June 22 was proclaimed the Day of Remembrance of Victims of the Great Patriotic War. In Ukraine, the Day of mourning and commemorating the victims of war was proclaimed 2000. On this day solemn commemorative events are held. In particular top state officials lay flowers to the memorials. The number of broadcast entertainment programs is limited and a minute of silence is observed.