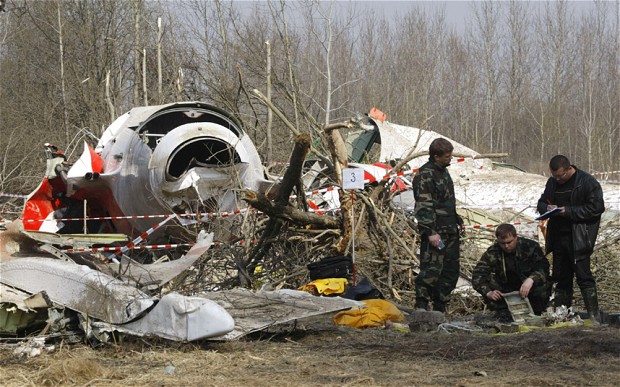 Poland to dig up graves in bid to prove Russian conspiracy

Poland will exhume and once again perform autopsies on the remains of President Lech Kaczynski and all 96 victims of a plane crash in Smolensk, western Russia.

New Polish authorities believe the theory that Russia assassinated the Polish president and a high-ranking government delegation by downing their plane.

After the conservative Law and Justice party led by the late president’s twin brother Jaroslaw Kaczynski came to power, the version that Russian President Vladimir Putin “ordered the downing of the plane” is once again being investigated.

This theory has been ruled out as absolutely unfounded by both Russian and Polish official investigations into the April 2010 crash.

But now Marek Pasionek, head of a new team that took over the probe from the Polish military prosecution, said: “The investigation was conducted sloppily, and will now be accelerated.”

Pasionek also “explained that it was necessary to exhume the bodies of all the victims, first to exclude misidentification – which has already been established in six cases – and, second, because not all the bodies were autopsied before burial.”

Polish daily Gazeta Wyborcza writes that “the remains of the bodies become the main evidence for the various versions of the causes of the accident, considering that Russia refuses to return to Poland wreckage until the Russian prosecution has completely closed its investigation.”

“We’ll check the assassination theory because military prosecutors gave up on it prematurely,” Pasionek said as he address the victims’ families, “who are deeply divided, since some believe it was assassination and that the Kremlin and the former Polish Liberal government led by the current President of the European Council Donald Tusk hid the truth, while others refuse the conspiracy theories and creating a new cult out of the Smolensk tragedy for political purposes, and want the dead to be finally left to rest in peace.”

The Polish prosecutor’s office believes the remains of the 96 passengers and crew from the presidential Tupolev aircraft could even now, after six years, provide evidence that the plane did not crash because its pilots attempted to land it in dense fog and impossible weather conditions, in a poorly equipped military airport in Smolensk where no civilian aircraft had landed for a year prior to the accident.

The pilots were under pressure to make sure President Kaczynski and the high state and military delegation was not late for an important commemoration to Polish officers, the victims of the Soviet massacre in the Katyn forest.

Exhumations will start in the fall of this year, and can be carried out against the wishes of those families who refuse to give their permission.

Coincidentally, a court in Warsaw ruled out the assassination theory earlier this week, as the trial of the deputy security chief of late President Kaczynski, General Pavel Bielavny, concluded.

He received a suspended sentenced and was fined USD 2,571 dollars for failing to fulfill his duties in the preparations for the trip.The court said Bielavny did not check the technical conditions at the Smolensk airport but was satisfied with the Russian authorities’ statement that the military airport could be used to land the Polish government’s plane.

“There is no basis to conclude that the cause of the accident was an assassination and an explosion,” the court said.