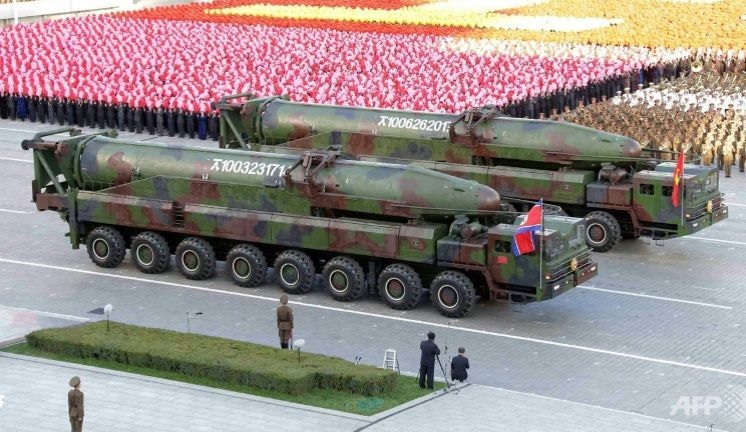 The first test shortly before 6am (5am, Singapore time) was deemed to have failed, but the ministry said it was unable to confirm the status of a second launch detected two hours later from the same location on the east coast.

Both test were believed to be of a much-hyped, intermediate-range Musudan missile capable of reaching US bases as far away as Guam.

North Korea had previously carried out four failed Musudan tests this year, in a setback for a weapons programme that ultimately aspires to develop a proven nuclear strike capability against the US mainland.

UN resolutions ban North Korea from any use of ballistic missile technology and, just hours before Wednesday’s launch efforts, the Pentagon had warned Pyongyang against pressing ahead with any missile test.

In a statement, the South Korean defence ministry stressed that any such test was “a clear violation of UN resolutions,” while Japanese Prime Minister Shinzo Abe said it “cannot be tolerated.”

The Musudan has an estimated range of anywhere between 2,500km and 4,000km. The lower range covers the whole of South Korea and Japan, while the upper range would include US military bases on Guam.

First unveiled as an indigenous missile at a military parade in Pyongyang in October 2010, the Musudan has never been successfully flight-tested.

Three failures in April were seen as an embarrassment for North Korea’s leadership, coming ahead of a rare ruling party congress that was meant to celebrate the country’s achievements.

Another attempt in May was also deemed to have failed.

During the party congress in May, North Korean leader Kim Jong-Un had personally extended an offer of military dialogue with the South.

The proposal was repeated several times by the North’s military, but Seoul dismissed all the overtures as insincere “posturing” given Kim’s vow at the same congress to push ahead with the country’s nuclear weapons programme.

In recent months, North Korea has claimed a series of technical breakthroughs in developing an intercontinental ballistic missile (ICBM) capable of delivering a nuclear warhead to targets across the continental United States.

The claimed achievements included miniaturising a nuclear warhead to fit on a missile, developing a warhead that can withstand atmospheric re-entry and building a solid-fuel missile engine.

The North also hailed the successful test of an engine specifically designed for an ICBM that would “guarantee” an eventual nuclear strike on the US mainland.

Outside experts have treated a number of the claims with scepticism, while acknowledging that the North has made significant strides in upgrading its nuclear arsenal.