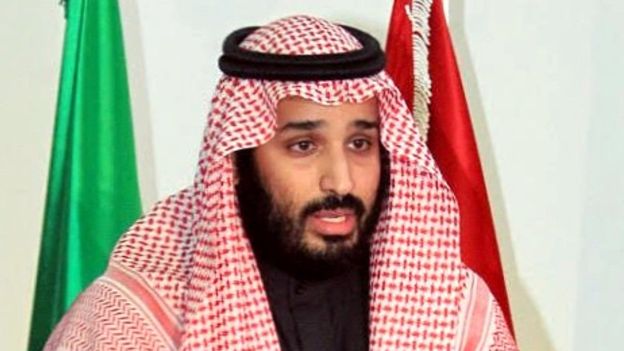 The famous American TV channel, NBC, ran a report about Saudi Prince Mohammed bin Salman’s historic visit to Washington where he was personally received by President Obama and also met with key administration figures. The report, and the visit itself, suggest several questions and shifts in Saudi-American relations as well as the political and economic future of Saudi Arabia itself.

Prince Salman is the deputy Crown Prince and holds several other portfolios including Defence; he is also chairman of the Council for Economic and Development Affairs. Most commentators suggest that he is the power behind the Saudi throne.

Several points arise from the NBC report: first, that the US clearly now regards Prince Salman as the successor to the Saudi throne rather than the actual crown Prince, Mohammad bin Nayaf whom, it revealed is suffering from a life threatening illness; second, the US is anxious about the future stability of the Kingdom because any systemic failure might create the climate of chaos that enable Islamic State to put down roots.

It is also of note that the information regarding Prince Nayaf’s health was leaked by an unidentified informant. Was this source the CIA or a member of Prince Salman’s entourage? And what is the purpose of this leak?

Despite the fact that the Obama administration will evaporate in five months’ time, it was quite a coup for the young prince to be greeted in this way by most of the decision makers in America from President Barack Obama, John Kerry, the Foreign Minister and the Secretary of Defense Ashton Carter, as well as leaders of the US intelligence services, and business and finance leaders.

These meetings were aimed at testing the man likely to be King, to establish his abilities and aspirations, and to analyse his character. It seems that the final evaluation was positive, in the light of his high level reception.

Neverthless, the NBC report suggested that there is a great deal of concern for the future of the Kingdom. Bruce Riedel, an American intelligence man, said the country was standing at a crossroads and that Prince Salman, widely known as ‘Prince Reckless’ had introduced a lot of costly policies, strategically and militarily, including the “unsuccessful” war in Yemen which has failed to achieve most of its objectives, and costs the State Treasury $ 200 million a day. In addition, Prince Salman is behind the Saudis’ insistence of keeping oil production levels so high that oil prices continue at rock bottom; a decision aimed at wounding the kingdom’s regional rival, Iran with whom Obama championed rapprochement during the past year or so.

The situation of Prince Mohammad bin Nayef remains a riddle. A colleague of mine met this man a month ago, and assured me that – contrary to the reports that he is dangerously ill – he was healthy, ran his affairs as normal and did not show any signs of disease.

Now we are told that this deterioration in his health is due to a serious injury sustained as a result of the assassination attempt by a suicide bomber from Al Qaeda on 5th of September 2009. As we recall, reports at the time said his injuries were very minor, and Prince Nayef met Saudi King Abdullah according to schedule the very same night. At the time, some commentators questioned whether this had actually occurred at all or if it was fabricated. There were no pictures of the bomber’s remains, or any blood in the room where the bombing allegedly took place.

What we begin to infer from all of the above is a plan to oust the Crown Prince whose position will then be taken by the deputy Crown Prince – Prince Salman – who will then jump to the throne, succeeding his father who will step down for health reasons.

In addition, one could infer that this scenario has been tacitly approved by Washington because why else would Prince Salman be received with such enthusiasm? The question then arises, what price is being paid (on both sides) for the new arrangement?

One has also to ask how Prince Nayaf – and those members of the royal family who are close to him – would respond to this unceremonious ouster. It is not without irony that Nayaf ascended to the position of Crown Prince after King Salman effectively sacked his predecessor, Prince Muqrin after just four months in post. Muqrin did not contest the official explanation – that he had asked to be removed – and went quietly away. One should not assume that Nayaf will do the same.