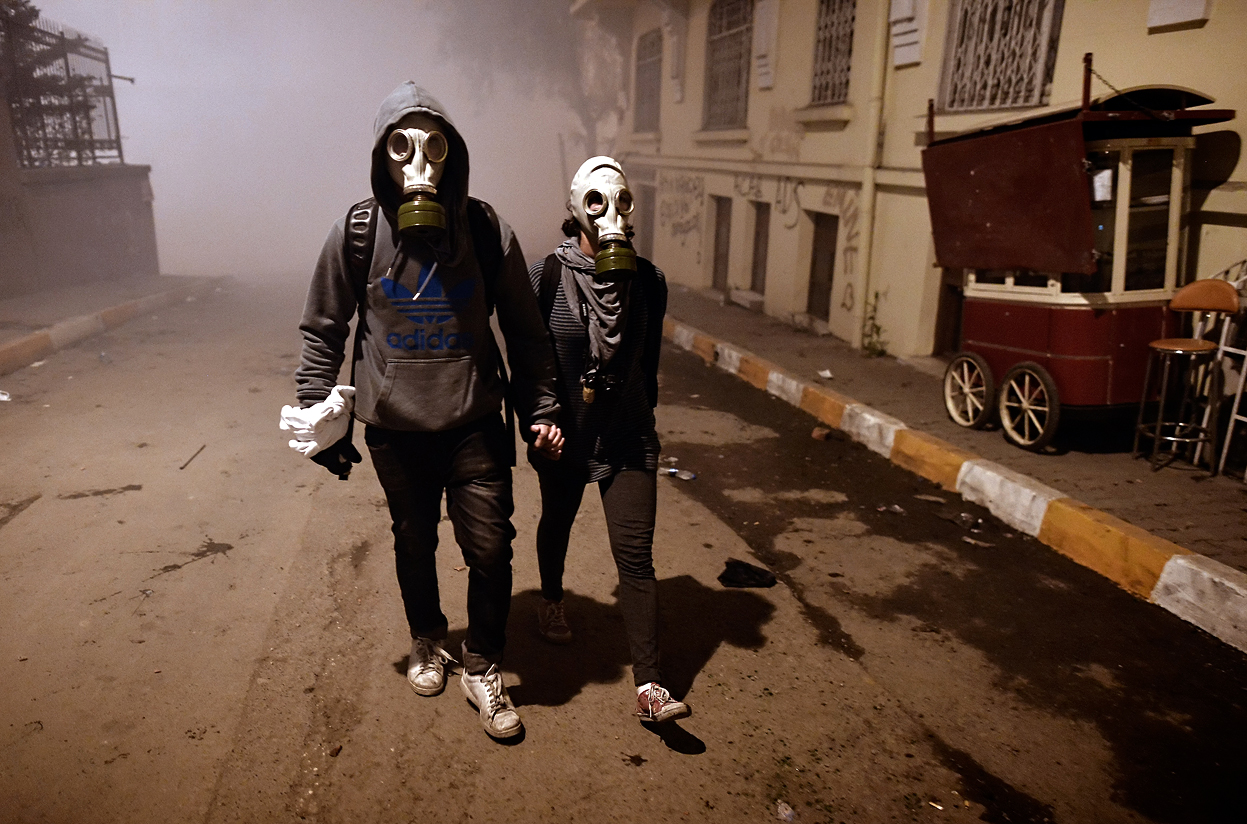 For residents of Cihangir, a trendy neighbourhood of cafes and bars in central Istanbul, it almost felt like a return to the summer of 2013, when protesters played cat-and-mouse with riot police amid clouds of tear gas night after night.

Two demonstrations ended with police intervention over the weekend: the first, a sympathy protest for a record store owner whose shop was attacked by thugs, apparently angered that his clients were drinking alcohol during Ramadan. The second, a pride march by the transgender community.

While the two were, on the surface, unrelated, they touched the same raw nerve that triggered weeks of nationwide protest three years ago: a sense, among young liberal Turks, that freedom of expression is being curtailed by a ruling party and its followers bent on imposing conservative, religious ideals.

Unlike 2013, they were stamped out almost as quickly as they began by a heavy police presence.

Opponents accuse President Tayyip Erdogan, who has dominated Turkish politics for a decade and a half, of increasingly authoritarian rule in the mostly Muslim nation of 78 million, a NATO member with aspirations to join the European Union.

“A concerted effort is underway to dehumanise the streets, to create a society stripped of its reactions,” said Sedef Cakmak, an LGBT activist who works at the mayor’s office in the opposition-controlled neighbourhood of Besiktas, near Cihangir.

“For all its flaws, Turkey has a certain culture of democracy which there’s an effort underway to destroy. People will react to that in whatever form,” she said.

Saturday’s protest was called after several dozen attackers threw bottles at music fans who had gathered the night before at a Cihangir record store for a listening party to mark the launch of a new Radiohead album. Some of the attackers were detained over the weekend but later released, local media said.

“I saw 25 to 30 men, some with sticks. They screamed ‘We will burn you inside … how dare you drink during Ramadan’,” said Emre Yildirim, a 30-year old computer engineer who was at the party. Turkey, he said, had become increasingly polarised.

“Over the past three years or so, the space for people like this seems to have increased. They believe they’re supported, that there is a power behind them … They almost think if they do this, they’ll get a pat on the back.”

Hundreds of riot police prevented Sunday’s march nearby in support of the transgender community. The event had been banned over security fears after ultra-nationalists said “degenerates” should not be allowed to demonstrate.

At a dinner to break the Ramadan fast late on Sunday (June 19), attended by artists including Turkey’s best-known transgender singer, Erdogan condemned the violence at the record store, saying its Korean owner, who has lived in Turkey for six years, had been victimised. But he said both sides were to blame.

“Using brute force to interfere is as wrong as organising an event spilling over to the street during Ramadan,” he said.

Few in the coffee shops of Cihangir think protests could resume on the scale of 2013, when a reaction against plans to redevelop the nearby Gezi park spiralled into an unprecedented wave of dissent against Erdogan, then prime minister.

Six people were killed and thousands wounded during a police crackdown against protests which went nationwide. There have been few street demonstrations since.

Erdogan has consolidated his power, weathering challenges including a corruption scandal a few months later that he dismissed as a plot by his enemies, and going on to win Turkey’s first popular presidential election in August 2014.

Prosecutors have opened more than 1,800 cases against people including journalists, teenagers and a former Miss Turkey for insulting him since he won the presidency, in what his opponents see as an effort to shut down all avenues of dissent.

Erdogan said on Saturday (June 18) he would revive plans to build a mosque and a replica Ottoman-era barracks on Gezi park, as well as an opera house, saying it was one of the areas “where we need to be courageous” and “reclaim our history”.

Resentment is building again, particularly over comments from Erdogan seen as interfering in private life, including a recent call for Muslims to reject contraception.

“There was a sense of exhaustion and hopelessness. But recently there has been an increase in attacks … on people’s private lives, which I think will be a trigger for another wave of protest,” said Goksel Tunali, 40, a Cihangir resident.

Any hint of unrest will be met with heavy security. Dozens of buses of police were brought into the central Taksim square and metal barricades erected on Sunday to stop the transgender march, which witnesses said only involved around 50 people.

The Korean record store owner, Seogu Lee, described his customers as “the most peaceful people you can ever imagine”. In a statement on Facebook he condemned the attackers, but urged his supporters against blaming Turks or Muslims.

“True Muslims have more tolerance than any other religion,” he wrote. “Every country has those stupid people that we have to fight against. We were just unlucky to encounter them.”