Home » Pictures » The Week in Pictures 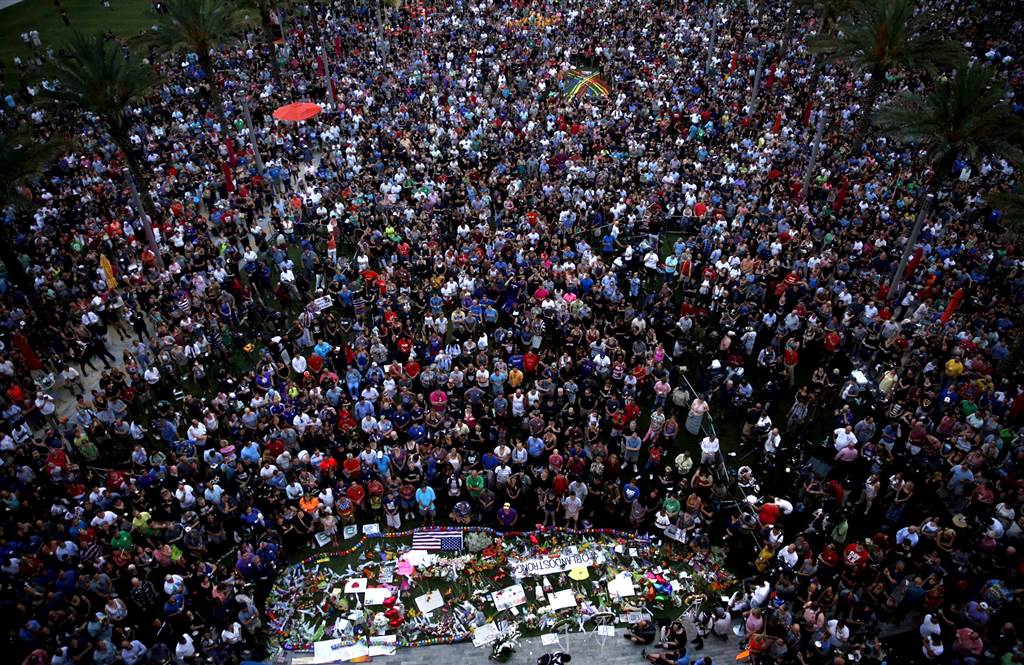 The Week in Pictures

Hundreds of people gather at a memorial outside of the Dr. Phillips Center for the Performing Arts to place tributes and flowers in honor to the victims of the mass shooting at the Pulse nightclub in Orlando, Florida on June 13. A total of 50 people including the suspect were killed and at least 53 others were injured in the attack at the LGBT club.

Members and supporters of the LGTB community attend a candlelight vigil outside the White House to honor the victims of the mass shooting at Pulse, a gay nightclub in Orlando, Florida, in Washington on June 12.

Forensics police officers collect a woman’s shoes on the ground behind police tape in Birstall near Leeds, June 16. Jo Cox, a lawmaker for Britain’s opposition Labour Party, has died after she was attacked on Thursday, police said.

Paralympic gold medalist Oscar Pistorius walks across the courtroom without his prosthetic legs during the third day of the re-sentencing hearing for the 2013 murder of his girlfriend Reeva Steenkamp, at Pretoria High Court, South Africa on June 15.

Firefighters guide a body being lifted by a ladder truck from the burned-out ruins of an abandoned office building in the Westlake district near downtown Los Angeles, June 14. A dispute between homeless people living together in the building led one of them to set a fire that killed five others.

English soccer fans run for cover after getting sprayed with pepper spray by French police during scuffles in downtown Lille, northern France, June 15, one day ahead of the Euro 2016 Group B soccer match against Wales in nearby Lens.

Women react as they watch cyclists participate in the World Naked Bike Ride, which organizers say is a protest against reliance on cars and oil, on Westminster Bridge London, June 11.

Durga Kami, a 68 -year-old 10th grader plays volleyball with friends during a break from classes at Shree Kala Bhairab Higher Secondary School in Syangja, Nepal. Kami, started going to school to escape a lonely home life following the death of his wife.

Pope Francis caresses a tiger during audience to the “World of Travelling Shows” at Paul VI Hall at the Vatican, June 16.

A banner stating “We Love You Mohammad” is displayed as well-wishers touch the hearse carrying the body of the late boxing champion Muhammad Ali during his funeral procession through Louisville, Kentucky, June 10.

Jockey Irad Ortiz Jr., riding Creator, reacts as he’s walked to the winner’s circle after they won the 148th running of the Belmont Stakes at Belmont Park on June 11.

Iranian women perform their noon prayers in a mosque at the shrine of Shiite Saint Abdulazim during Muslim holy fasting month of Ramadan in Shahr-e-Ray, south of Tehran, Iran, June 12. Ramadan is an Islamic holy month of fasting in which Muslims are expected to abstain from food, drink smoking and sex during daylight.

Opposition supporters stand by burning barricades set up in protest over a pro-government MP whom they allege made offensive remarks about the opposition leader, in the Kibera slum of Nairobi, Kenya, June 14.

Joanne Steury, Margerie, Steury and Rosa Graber touch the Pacific Ocean for the first time during a family trip from their Amish community in Michigan to Coronado, Calif. on June 9.

Vice President Joe Biden and President Barack Obama depart a makeshift memorial after placing flowers in memory of shooting victims of the massacre at the Pulse, a gay nightclub in Orlando, Florida on June 16.