Home » Economy » Putin: Recession in Russia is more or less over 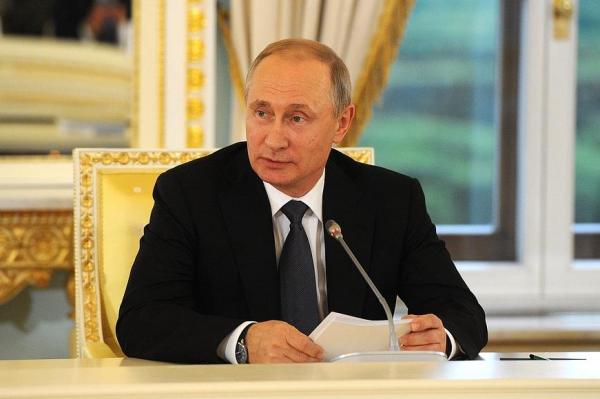 Putin: Recession in Russia is more or less over

During his address at the St. Petersburg International Economic Forum (SPIEF-2016), Russian President Vladimir Putin said that “Structural problems in the global economy have not been overcome,” adding that “it hasn’t been possible to restart growth just yet.”

While saying that the “current tense geopolitical situation is mainly related to economic challenges”, Putin also mentioned that he wanted Russia to deliver annual economic growth of 4 percent. By 2025, there will be a single energy market and Russia will play a vital role in it, according to the Russian Leader.

Putin, who expected competition on global markets to intensify and barriers for technology flows to appear, said at the Forum’s Plenary meeting: “Structural problems accumulated in the global economy persist,” adding “It hasn’t been possible to restart growth just yet.”

According to him, “Restructuring of complete branches is inevitable; many production facilities will lose their value, the demand for trades and competencies will change and competition will intensify on traditional and on emerging markets.”

During his talk, he also recognized the attempts to reserve and monopolize the benefit from new generation technologies, and he said that “the current geopolitical tensions are also related to the economic uncertainty, to the depletion of previous sources of growth to some extent.”

“There are risks that it (the geopolitical tensions) may strengthen and even be artificially provoked,” he added.

The Eurasian partnership with Russia, and the intentions for it are not a secret for anyone, and during today’s conference, Putin called to work on creation of a large Eurasian partnership involving the Eurasian Economic Union, India, China, the Commonwealth of Independent States, and others, urging development of cooperation within flexible integration entities

“TASS” reported that during the Russian Leader’s address at the St. Petersburg International Economic Forum (SPIEF-2016) he said: “Technological and economic tasks in the current situation have such scale and nature that we can develop effectively only by joining forces and building cooperative ties,” he said.

Putin is looking forward for a technology revolution, and he suggests that companies investing in efficient technologies should obtain more access to financial resources.

The technology potential is fairly significant in “digital and industrial technologies, robotic engineering, energy, bio-technologies, and healthcare,” Putin said. He added that”Discoveries in these areas may lead to a real technology revolution, explosive growth of labor productivity.”

“It is already taking place and will take place definitely,” Putin said. “Restructuring of complete branches is inevitable; many production facilities will lose their value, the demand for trades and competencies will change and competition will intensify on traditional and on emerging markets,” he added.

Why is SPIEF important?

So why is SPIEF important?… Let’s hear it from the Russian President. In his opening remarks Putin recalled the early days of the forum and that St. Petersburg’s first mayor, Anatoly Sobchak was the forum’s brain-father.

Putin said that “the forum has become an important site for meeting each other, having talks and exchanging opinion,” thanking “the leaders of countries and heads of international organizations, as well as businessmen who have gathered for the forum”.

“Such a discussion is still more important today, when the world is undergoing a fundamental transformation deep change concern practically all spheres of life,” he added.

By tradition the forum has served as a club for discussing strategic issues.

Recession in Russia… Over?

The Russian leader said that “Even though oil prices remain low compared with 2014 levels, the Russian economy has adapted and is the path toward growth,” announcing that he wanted “Russia to deliver annual economic growth of 4 percent”.

“We set ourselves the task to ensure the rate of economic growth of no less than 4 percent per year,” Putin told the St Petersburg International Economic Forum.”We are essentially out of recession,” he said.

Putin said a 4 to 5 percent inflation was achievable in medium term and that he approved of the central bank’s policy.

Russian news agency “TASS” reported that “For the first time in nearly a year, the Central Bank of Russia last week cut its key interest rate by a half percent to 10.5 percent per year. The bank said growth in the economy was “imminent” with inflation moving toward the target rate of 4 percent by late 2017″.

In defending the rate cut, the bank said the worst of the downturn may be in the past as growth starts to take shape. Quarterly growth in gross domestic product is expected no later than the second half of the year. Growth of 1.6 percent in GDP is expected in 2017, the bank said.

“We have created the basic conditions for setting our economy on a growth trajectory,” Putin said. “We have ensured macroeconomic stability and substantially reduced inflation.”

Putin’s optimism contrasts with analysis from the World Bank that said Russia’s economy will shrink by 1.6 percent GDP this year before growth returns in 2017. In a global forecast from the World Bank, Russia was singled out as one of the major economies expected to sink deeper into recession.

Lower oil prices are expected to limit Russia’s economic recovery, but the economy may become less exposed to commodity prices as it shifts to more productive industries. Putin said the Russian economy still has one of the lowest debt-to-GDP ratios and the economy was adapting to new market conditions characterized by lower oil prices. The Russian financial market, he added, was open and thriving.

“Trading on the stock exchange has grown considerably in some categories of assets,” he said. “Importantly, the scope of participation by foreign investors is broadening.”

Improving Ties With EU Despite Sanctions

Putin called on European leaders to improve ties with his country despite sanctions after meeting with European investors who said they want to expand their businesses there.

“Politicians should meet the businessmen halfway, show wisdom, long-term thinking and flexibility,” Putin said. “We need to bring back trust to Russia-European relations and restore the level of cooperation.”

He said Russia doesn’t need a new Cold War and that the country’s policy is “aimed at cooperation.”

“We don’t bear grudges and we are willing to meet our European partners halfway — this, however, must not be a one-way street,” he added.

As Putin was delivering his speech in St. Petersburg, the EU extended for another year some of its sanctions targeting Russia. After the EU first imposed sanctions two years ago, Moscow retaliated by banning imports of meat, vegetable and dairy products from the EU, a blow to many of the bloc’s members.