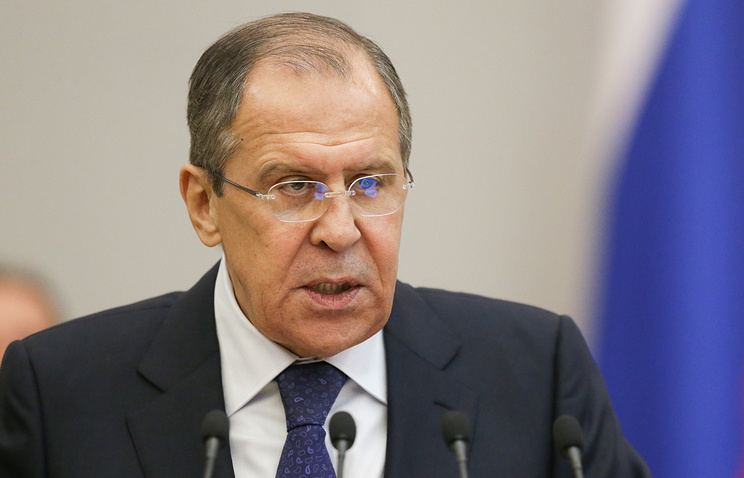 Russian Foreign Minister Sergey Lavrov has accused the West of trying to undermine Russia’s positions on the global markets of arms and energy resources, addinng that Moscow will now allow to draw itself into confrontation.

“We see continued attempts to exert pressure on us, unleash an anti-Russian campaign to make us abandon the fundamental moral approaches towards the world order issues,” Lavrov said. “There is an obvious desire to patch up the trans-Atlantic discipline at our expense, undermine Russia’s positions as a competitor in the energy and weapons market.”

“We have no intention of getting involved in the confrontation imposed on us – either with the US, NATO or the EU,” the minister noted. “It’s obvious that the confrontation habits and geopolitical games with zero results hamper efforts to ensure sustainable global development and generate crises similar to Ukrainian.”

Lavrov expressed the hope that the West “realized the harmfulness of appeasing radical nationalists and will seek strict compliance with the Minsk agreements of February 12, 2015, through the direct dialogue between the Ukrainian authorities and Donetsk and Lugansk.” “We are ready to cooperate to achieve this goal, to help create favorable conditions for solving large-scale problems in Ukraine,” he added.

“The conflicts in the CIS space, just like in any other region, can be only resolved by peaceful means, by political, diplomatic and other non-military means,” Lavrov noted. “This applies to the intra-Ukrainian crisis, the Transdniestria and Nagorno-Karabakh problems. The main thing is to honor the agreements reached by countries and prevent their revision. We are convinced that all these crisis situations would be much easier to deal with in the event of overcoming the systemic flaws in European cooperation and removing the remaining dividing lines.”

Dead-end of sanctions against Russia eroding

The Russian minister has stressed that the large number of participants at the St. Petersburg International Economic Forum (SPIEF) confirms that the dead-end of sanctions against Russia is eroding.

“We are not running around and trying to convince our European and US colleagues to lift sanctions from us – economic, sectoral, financial. We are convinced this is undignified for Russia,” Lavrov said at the State Duma during the “Government Hour” session.

“Those who imposed sanctions should decide by themselves on how to get out of this sanctions dead-end. By the way, this dead-end is eroding, and the list of participants in SPIEF confirms it,” he noted.

“We hear constant chanting from our European colleagues that sanctions will be lifted after the Minsk Agreements are implemented. They think that only Russia should implement them. It was conceived by European colleagues in their striving for finding a compromise between those who spoke against further sanctions and those who insisted to keep the sanctions forever – to keep them even after the settlement of the Ukrainian crisis because Russia ‘behaves badly on the international arena’,” the foreign minister explained.

According to Lavrov, not a single state is in the position to lay claim to tackling modern international problems on its own.

“International relations these days are at a turning point of their development,” he said. “A polycentric architecture continues to take shape.”

This is an objective trend that “reflects the cultural and civilizational diversity of the modern world, the emergence and strengthening of new centers of power and the natural wish of peoples to determine their own future,” he stated.

“Alongside this global competition is getting stronger around the world. Its results will largely determine the contours of a future world order,” Lavrov said. “Against the backdrop of soaring terrorist threats in the world and the expansion of regional conflicts the intention of our partners in the West led by the United States to achieve global domination by all possible means is getting ever clearer.”

“The latest events have demonstrated that such calculations are a delusion,” Lavrov said. “Obviously, not a single state, even the strongest one, or a group of countries, is capable of laying claim to the right to tackle the numerous problems of today on its own.”

Lavrov drew attention to the need for collective diplomatic efforts “on the basis of genuine equality of all main international players in the interests of identifying optimal responses to the large-scale challenges and threats common to all.”

“This is precisely the foreign policy philosophy and practice that Russia adheres to,” Lavrov said.