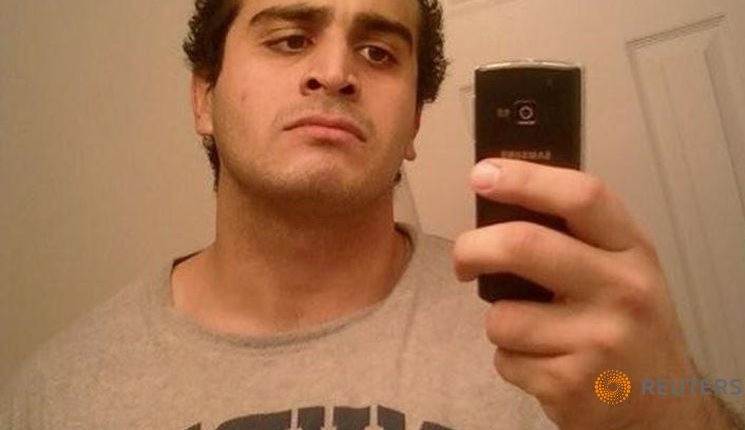 The US gunman who launched the worst terror attack on American soil since 9/11 at a gay nightclub in Orlando was radicalised by militant propaganda, officials said, amid reports he was a club regular.

Lone gunman Omar Mateen killed 49 and wounded another 53 before he was killed when police stormed the Pulse, one of Orlando’s most prominent gay venues, early Sunday (June 12).

The attack is reminiscent of the November 13 suicide attack on the Bataclan concert hall in Paris, where 90 people were massacred when militant gunmen opened fire on concertgoers.

A total of 130 people died across the French capital that night in a series of shootings and suicide bomb attacks.

The FBI said Mateen had been radicalised by extremist propaganda, but unlike the Paris attacks found no evidence that the shooting had been coordinated from abroad.

The Islamic State group claimed that Mateen was acting as “one of the soldiers of the caliphate in America.”

US investigators believe that Mateen was a “lone wolf” inspired by militant propaganda to carry out what President Barack Obama dubbed “an act of terror and an act of hate.”

FBI chief James Comey said his agents found no evidence that the attack had been directed from outside the United States, “and we see no indication that he was part of any kind of network.”

Agents are instead looking into the possible role of anti-gay bigotry.

The FBI was “highly confident” Mateen had been “radicalised” while consuming online propaganda, Comey said, adding that he claimed allegiance to Islamic State leader Abu Bakr al-Baghdadi in a series of calls during the attack.

In a further twist to the story, four people said Mateen, 29, had been a regular at the gay club, the Orlando Sentinel newspaper reported late on Monday.

“Sometimes he would go over in the corner and sit and drink by himself, and other times he would get so drunk he was loud and belligerent,” Ty Smith told the Sentinel.

Smith said he had seen Mateen inside at least a dozen times. “We didn’t really talk to him a lot, but I remember him saying things about his dad at times,” Smith said. “He told us he had a wife and child.”

Another Pulse regular, Kevin West, told the Los Angeles Times that Mateen messaged him on and off for a year using a gay chat app.

Other club goers told local media and MSNBC News that Mateen had been using multiple gay apps, including Grindr, with mutual acquaintances to “hook up.”

Mateen’s wife, Noor Zahi Salman, was not cooperating with authorities, an unnamed law enforcement official told the Sentinel. However agents have talked extensively with Mateen’s ex-wife, Sitora Yusufiy, who earlier described him as bi-polar and prone to violence.

The UN Security Council unanimously condemned the attack after haggling with Russia and Egypt over a reference to targeting gay people.

People gather at a vigil for Pulse nightclub victims at the Dr. Phillips Center in Orlando, Fla., Monday, June 13, 2016.

The slaughter raised questions about US counter-terror strategy and gun laws. The FBI said it had investigated Mateen, a US citizen of Afghan descent, but had cleared him of extremist ties. Nevertheless Mateen legally bought a rifle and a handgun.

Relatives and acquaintances portrayed Mateen as a violent, unstable man who had beat his ex-wife and expressed homophobic views.

“We make it very easy for individuals who are troubled or disturbed or want to engage in violent acts to get very powerful weapons very quickly,” Obama said. He demanded that the Republican-controlled Congress pass legislation to curb the sale of assault-type weapons like the one used in Orlando.

The White House said Obama would travel to Orlando on Thursday to pay his respects to victims’ families.

A gay chorus sang and rainbow flags fluttered in the evening wind late on Monday as thousands in Orlando gathered for the first major vigil for the night club victims.

The trim green lawn outside a performing arts centre filled with people gay and straight to hear speakers urge the city known for theme parks and fun to unite and not surrender to fear.

“We’re not going anywhere, we are here to stay,” the crowd chanted at one point. Police put their number at about 5,000. “It shouldn’t be so easy to get guns,” said Joe Brennan, a 52-year-old engineer at the vigil. “The innocent deserve to be protected, too.”

Police have identified all 49 victims – mainly club goers celebrating Latin Night at the Pulse nightclub at the start of Gay Pride month. Many of the wounded remained hospitalised.

As the club was closing around 2am Sunday, Mateen began a gun battle with an off-duty officer working at the club. More officers responded, and the gunman escaped to the bathroom, where he barricaded himself and seized hostages.

Witness Janiel Gonzalez described scenes of mayhem as the gunman sprayed revellers with bullets. “It was like complete chaos,” he told AFP. “People were screaming ‘Help me, help me, I’m trapped!'”

The attacks triggered solidarity vigils by gay and lesbian groups and their supporters across the world. Thousands marched under rainbow flags in London’s Soho district, bursting into chants of “We’re here, we’re queer, we will not live in fear.”

Thousands also gathered Monday in New York at the birthplace of the gay rights movement, and more than 100,000 paraded through Los Angeles on Sunday at a previously planned pride parade.