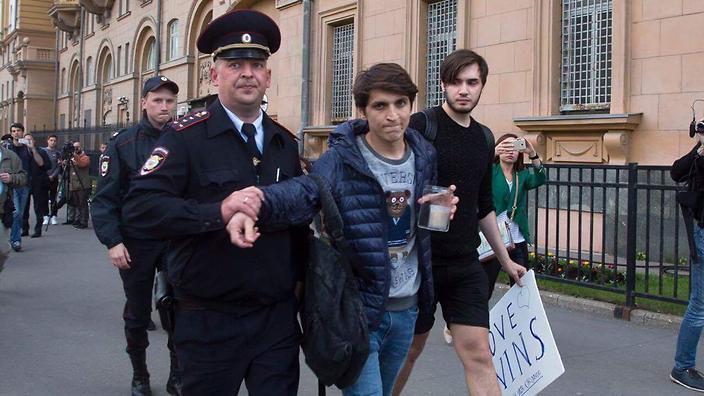 Felix Glyukman and boyfriend Islam Abdullabeckov were detained after leaving flowers and a sign reading “Love wins – Stay with Orlando” outside the embassy.

Mr Glyukman told SBS that police decided to act when they refused to leave the memorial.

“He (the police man) grabbed Islam and took him to the car,” he said.

“We only wanted to express our condolences for the murder of these people and we had not at all planned any kind of political act,” he added.

“This is completely surreal,” Abdullabeckov wrote in a caption.

Glyukman added: “We tried to leave flowers and a sign at the embassy — we did not succeed.”

He also posted a photo of himself in detention on Instagram with his sign fallen to the ground.

A pile of flowers and candles have been left outside the US embassy in Moscow, a day after Omar Mateen gunned down 49 people in a gay nightclub in the Florida resort city of Orlando.

The attack, which the Islamic State group says was carried out on its behalf, has sparked an outpouring of grief and anger around the world, with Russian President Vladimir Putin branding the killings “a barbaric crime”.