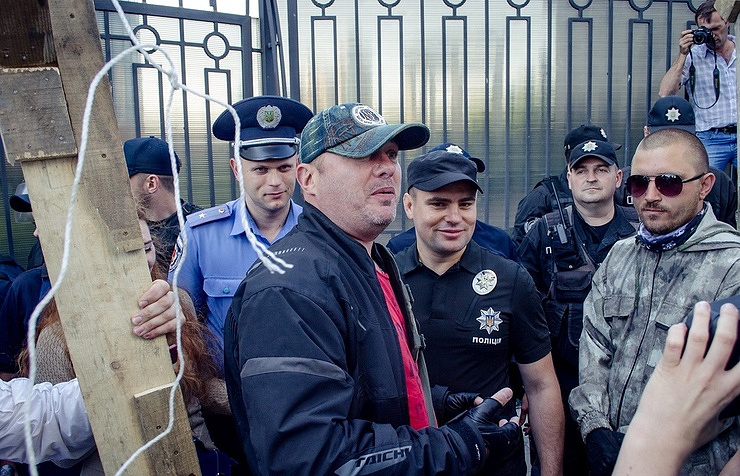 The Russian Foreign Ministry has related the action against the country’s Consular General in Odessa and the tragedy in the Odessa Trade Union House. The statement comes from the post on Twitter, which the Foreign Ministry’s Commissioner for Human Rights, Democracy and Rule of Law Konstantin Dolgov made on Saturday (June 11).

“The Ukrainian national radicals have organized a dirty and coward action against the Consulate General in Odessa,” he wrote. “It is nothing new for them after they burned down people in the Trade Union House.”

Some 50 representatives of the Right Sector extremist organization, banned in Russia, and the Azov corps blocked on Friday the entrance to Russia’s Consulate General in Odessa, which was to have hosted a reception on the occasion of Russia Day.

The Ukrainian agency UNN quoted a certain chieftain of the “Black Sea Formation of Gaidamak” Sergey Gutsalyuk, who said the action participants will not let anyone in the consulate.

“We blocked entry to the Consulate, no one will get in there. We want to at least identify supporters of the aggressor country,” Gutsalyuk said.

“As a result, the reception was disrupted. The territory of the Consulate was pelted with eggs and potatoes,” the Russian consul general said.

He said that participants of the rally brought several gallows to the entrance to the Consulate and were chanting insulting slogans to the address of Russia and its leaders, and made those invited to the reception get down on their knees and “shout that they are guilty before Ukraine.”

The diplomat expressed special indignation in connection with the fact that law enforcers did not interfere. “None of the police or national guard reacted properly. Several law enforcers were just standing near the crowd,” he said.

He expressed particular disappointment with the fact that the consulate general of the Russian Federation sent a note to the Ukrainian Foreign Ministry’s mission beforehand asking it to ensure security measures on that day.

“I am forced to note that Ukraine’s authorities do not react while local law enforcement bodies are inactive,” Katunkin said. “City police and national guard telephones do not answer.”

This action of the radicals against Russian diplomatic missions in Ukraine is not the first one in recent history. In spring, similar actions of extremists were made in connection with Russia’s trial of former Ukrainian pilot Nadezhda Savchenko on the case of the murder of Russian journalists.

On March 6, unidentified persons in camouflage uniforms and balaclavas damaged with baseball bats vehicles with Russian diplomatic license plates, as well as pelted with missiles and smoke flares the territory of Russia’s embassy in Kiev.

On March 9, Russia’s embassy was pelted with stones and iodine bottles, and insults were written to the address of Russia on the fence. The next day, unidentified assailants threw several Molotov cocktails onto the entrance to the Russian embassy. Those days, anti-Russian actions also occurred in front of the Russian consulates in Ukraine’s Odessa and Lvov.

The city of Odessa saw riots on May 2, 2014, during which soccer fans from other cities, as well as Right Sector militants and so-called “Maidan self-defense” representatives from Kiev organized a march along city streets. Clashes with federalization supporters occurred during the march.

Radicals set ablaze the Trade Unions House, where their opponents hid, and a tent camp where activists were collecting signatures for a referendum on Ukraine’s federalization and for the status of a state language for Russian. The attackers did not let anyone leave the burning Trade Unions House building.

At least 48 people died and 247 were injured in the clashes and the fire in the Trade Unions House. Some Ukrainian politicians asserted that the death toll reached 116 but that the Kiev authorities concealed the facts.

The authorities conducted an investigation and said 22 people were instigators of the disorders. Half of them were detained, and all of them are anti-Maidan supporters. At the same time, investigators have failed to discover evidence that the Trade Unions House was set on fire deliberately.

The Council of Europe’s International Advisory Panel on November 7, 2015 criticized the investigation conducted by Ukraine’s authorities. The panel in particular discovered human rights violations during the probe.

The Council of Europe’s Director of Human Rights and Special Advisor for Ukraine Christos Giakoumopoulos has underscored that Ukraine is in for international condemnation for refusal to investigate murders on Maidan in February 2014 and the May 2, 2014 tragedy in Odessa.

In turn, Ukrainian President Pyotr Poroshenko has pledged to conduct “a comprehensive investigation and find those guilty.”

There have been no trials on the activity of law enforcers and rescuers two years after the tragedy. Member of the journalist and expert “May 2 Group” Sergey Dibrov said the key accusations in relation to law enforcers boil down to the fact that they did not prevent clashes. There are also many questions to rescuers, who could have reached the site of the massacre in 5 minutes but it took them about an hour to arrive.