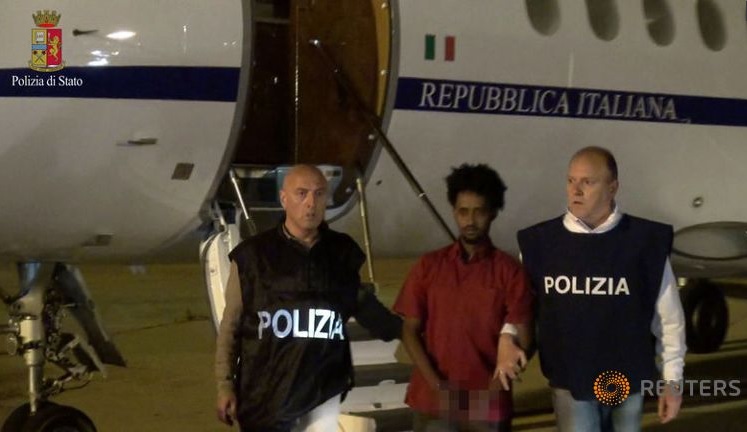 An Eritrean man suspected of running a huge human trafficking network that sent thousands of migrants to Europe, leaving many to die on the way, was extradited from Sudan to Italy overnight, officials said.

Medhane Yehdego Mered, nicknamed “the General”, had been heard on intercepted telephone calls boasting about cramming more people onto rickety boats than other traffickers, prosecutors said.

“This shows an absolute indifference about the lives of immigrants,” Italian magistrate Maurizio Scalia told reporters.

The 35-year-old was arrested in Sudan on May 24, Italian and British officials said, on charges of human trafficking and abetting illegal immigration and faces up to 30 years in prison if convicted.

Magistrates may eventually also accuse him of homicide as their investigation continues, judicial sources said. There was no immediate comment from any lawyer representing him.

It is the first time a suspected trafficking kingpin has been tracked down in Africa, where many of the smuggling networks are based, and brought to face justice in Italy since Europe’s immigration crisis started almost three years ago.

Mered is suspected of working with an Ethiopian, Ghermay Ermias, who is still at large, prosecutors said. Between them, they are accused of raking in huge sums by bringing migrants from Libya to Italy across the Mediterranean.

Italy has jurisdiction over the case because it was the first point of arrival of most of the migrants. It is also leading the investigation into the sinking of a vessel off the southern Italian island of Lampedusa in 2013 that killed 359.

Britain’s National Crime Agency (NCA) said it had helped track Mered to Sudan and held him responsible for the Lampedusa tragedy. An NCA statement said he was known as “The General” because he had styled himself on the late Libyan dictator Muammar Gaddafi.

Sicilian prosecutor Calogero Ferrara told Reuters last year and Mered and Ermias were opportunistic, purchasing kidnapped migrants from other criminals in Africa. By his calculations, each boat trip of 600 people made the smugglers between US$800,000 (549,454 pounds) and US$1 million before costs..

The smuggling networks have mostly eluded international law enforcement agencies because they are based on anonymous cells spread across many countries.

Italy has been on the frontline of the immigration crisis. About 170,000 migrants reached Italy by sea in 2014 and 153,800 in 2015, the International Organization for Migration says. So far this year, more than 40,000 migrants have arrived.

More than 8,000 people are also believed to have died in the Mediterranean since the start of 2014, some off the Italian coast and others seeking to reach Greece. Medecins san Frontieres estimated that 900 died last week alone.