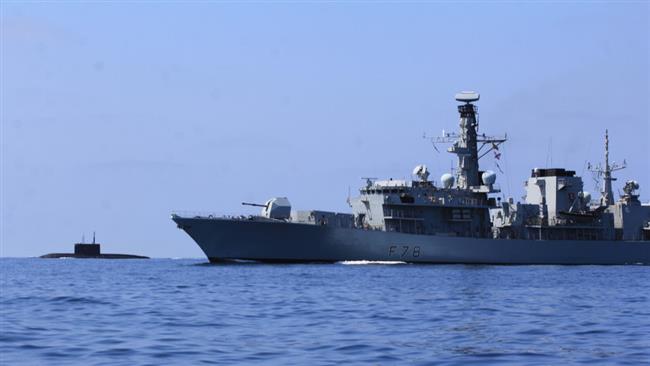 The British navy has intercepted a Russian submarine as it was cruising toward the English Channel, UK media report.

The Stary Oskol was being escorted by Britain’s frigate HMS Kent on Tuesday evening and passed the Strait of Dover on Wednesday morning, they said.

The Russian vessel was first detected in the North Sea where NATO ships are controlling the area.

Daniel Thomas, the commander of HMS Kent, said that detecting the Russian submarine “was a combined effort with NATO allies and shadowing such units is routine activity for the Royal Navy.”

British warships also intercepted a Russian frigate last month on its way to the Black Sea.

In March, a British warship monitored a Russian destroyer and its support ships which were returning from a deployment to Syria.

Tensions have risen as NATO has stepped up its military buildup near Russia’s borders since it suspended all ties with Moscow in April 2014.

Senior officials in Moscow have repeatedly accused NATO of seeking a confrontation, describing the military buildup as a threat to security in Europe.

Russia has also criticized NATO’s expansion to include countries in the Western Balkan region, saying the move directly harms Russia’s strategic interests in the area.

On Tuesday, Reuters said Russia is building an army base near its border with Ukraine as part of its frontline in a growing confrontation with NATO.

Russia is building up forces on its western frontiers at a time when the NATO alliance is staging major military exercises and increasing deployments on its eastern flank.

Reuters said a makeshift army camp was being built, with large numbers of newly-arrived servicemen and military vehicles, in the Russian town of Klintsy about 50 km (30 miles) from Ukraine.