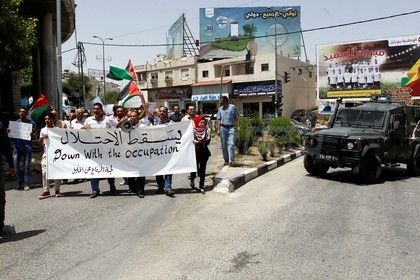 Dozens of Palestinian activists rallied on Sunday in the southern occupied West Bank city of Hebron to mark the 49th anniversary of the “Naksa,” when Israeli forces occupied the West Bank, the Gaza Strip, Syria’s Golan Heights and Egypt’s Sinai Peninsula in 1967.

The rally, organized by the Hebron Defense Committee, kicked off near the settler bypass road which separates Hebron from the nearby city of Halhul.

Israeli forces obstructed the rally by stopping military vehicles in the middle of the road, witnesses told Ma’an.

The witnesses added that Israeli soldiers and border guard officers formed a human chain to prevent activists from marching forward.

One of the organizers Muhammad Abulrahman al-Jibrini, 38, was reportedly attacked by the Israeli soldiers.An Israeli army spokesperson told Ma’an she was looking into the reports.

Participants in the rally carried posters in English and Arabic denouncing the Israeli occupation. The poster slogans included: “Down with occupation,” “After 49 years, we say enough of the occupation,” and “Dissolve the ghetto and move settlers out of the heart of Hebron”.

A representative of the Popular Front for the Liberation of Palestine (PFLP) delivered a speech on behalf of the left wing Palestinian parties.

“We will continue to struggle until the last Israeli soldier and the last settler leave the Palestinian land,” he told the crowd.

Palestinians commemorate June 5 as the “Naksa,” meaning “setback,” in remembrance of the displacement that accompanied Israel’s victory in the 1967 conflict.

Around 300,000 Palestinians were displaced from their homes, as well as thousands of Syrians from the occupied Golan Heights.

Palestinians believe the war completed the Israeli occupation of historic Palestine that began with the Nakba, or “catastrophe” of 1948, when 750,000 Palestinians were expelled from their homes in what became Israel.