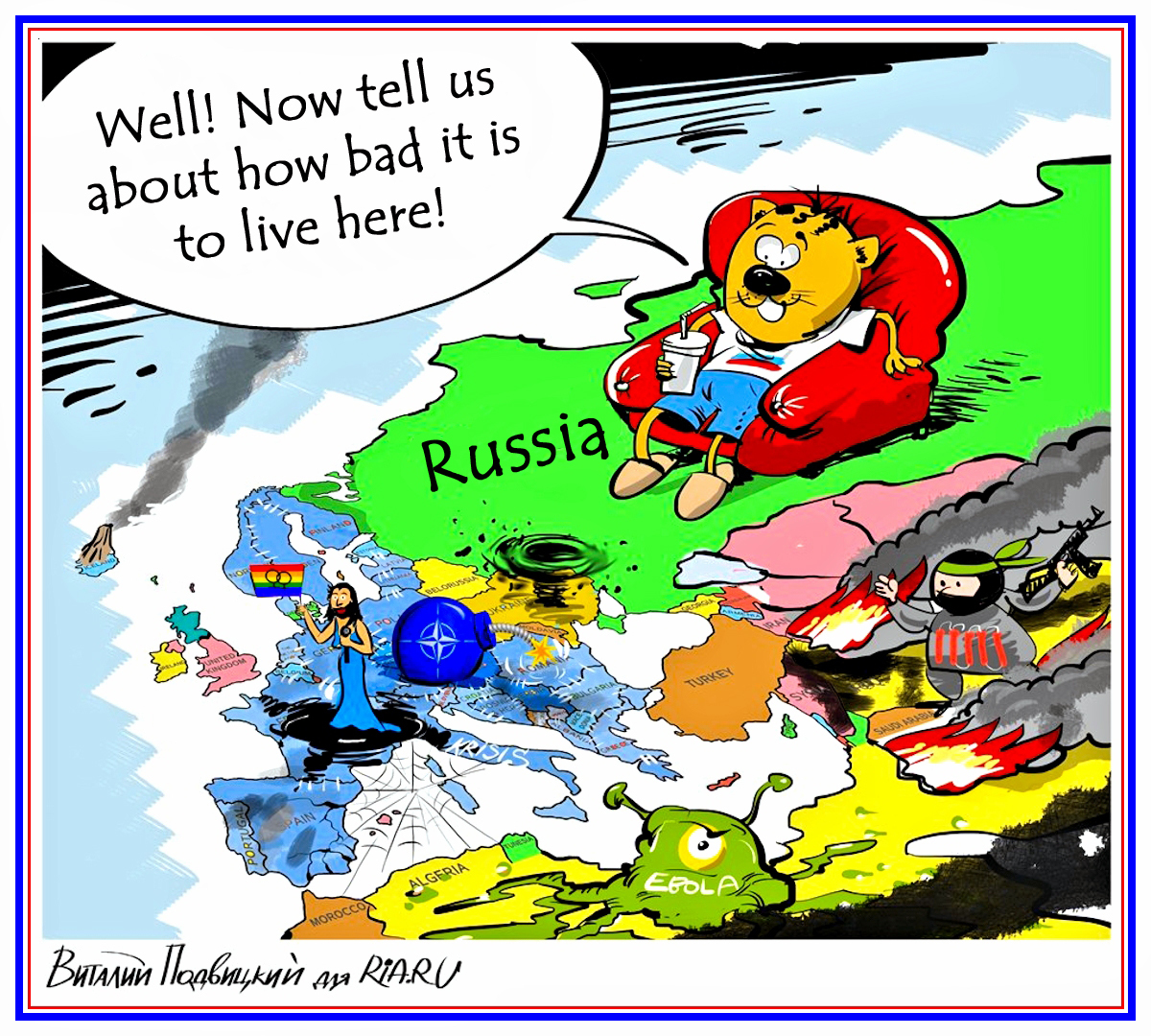 The West to Russia: We love to hate you

The word combination “bestselling book” means here that the circulation of 3,000 copies of the French version of the book was sold out instantly. A “bombshell” would be too weak a word to describe the controversy that the book by this veteran journalist caused.

Although, as the author himself admits, in France, they tried to pretend that they did not notice the book. In Switzerland, Mettan’s home country, on the contrary, people and major media outlets showed great interest in the work.

“This book is the result of years of professional experience and a reaction to the Ukrainian crisis of 2014,” the author wrote in the foreword. Speaking at a press conference dedicated to the Russian edition of his book, Guy Mettan said: “The West has always needed and will always need an “enemy at the gates.”

Russophobia is good to skillfully manipulate public opinion to achieve state, economic and geopolitical goals that may have no direct relation to Russia. This model of behavior continues for several millennia, from the time of the fall of Byzantium and the transfer of the center of Orthodoxy to Russia.

“My goal was to show examples of biased judgments of the West about Russia and urge fellow writers in different countries to comply with journalistic norms and objectivity of estimates in the analysis of events taking place in Russia,” the writer also said.

The author of the epilogue to the book, Professor Alexei Kozhemyakov, recollected a French proverb: “Speaking about the distorted interpretation of Russian reality by the Western media, I would like to recollect a French proverb that says that a corner is not how it is described – it is how it looks in really.”

The fate of the book in the West is not easy. Mettan complained that it was difficult to find a publisher for English and German-speaking readers, as major media outlets were trying not to pay attention to the book. Plus, there was no constructive criticism of the main theses of the author’s work.

The author of the preface to the Russian translation of Mettan’s book, Vladimir Pozner, noted that the book was actually a reasoned and convincing journalistic investigation.

Going back to history

Russophobe critiques of various nationalities attacked Mettan Guy: “Was there any form Russophobia under Charlemagne, if there was no Russia in the ninth century?” The Swiss intellectual responded that the crowned Emperor of the West (year 800) Charlemagne broke off relations with Byzantium, whose successor was Russia.

When presenting a brief history of Russophobia, the researcher could not miss out of his attention the Great Schism in 1054. Referring to the marriage of the refined and educated Anna – the daughter of Kyiv Prince Yaroslav the Wise – who married  illiterate French King Henry I, the author concludes that before 1054, European monarchs did not feed prejudices against Russia.

Guy Mettan still finds it hard to find an answer to the question of whether it was religion or politics that contributed to the emergence of the conflict.

“Western historiography lies without blushing in all that concerns the East and Russia,” concludes Guy Mettan.

The chapters of his book about the origin and genesis of the French, British, German and American Russophobia are particularly interesting.

The American Russophobia is the youngest. Since 1945, it has deftly straddled “the Nazis technique of mass propaganda and ideological motive to combat a powerful adversary – Soviet Bolshevism” in combination with French phrase-mongering about liberty, democracy and human rights.

The goals were typically Anglo-Saxon ones: domination at sea, access to major continental markets and military superiority.

Russophobia of our time

“During the first term of Boris Yeltsin (from 1992 to 1996), events were developing on a predictable scenario. The economic shock therapy imposed by the IMF, by Jeffrey Sachs in particular, was propagating neoliberal freedom in the devastated Russia. Privatization allowed a handful of robbers to appropriate national wealth under the pretext of the transition to capitalism, while Western media were praising Yeltsin for his order to use tanks to attack the legitimately elected parliament.

“Everything changed in January 1996 when Yeltsin, having admitted the insolvency of the borrowed model, put truly loyal patriots in the government, and later appointed former Foreign Minister Yevgeny Primakov as Prime Minister. Since then, the US anti-Russian propaganda started flourishing again. The same old ideology was used as a weapon against the new Russia.”

A new round of stigmatization of Russia fell for 2003. Guy Mettan noted two aspects in this regard: an international one (the refusal to recognize the invasion of Iraq as struggle against terrorism under the false pretext of the need to withdraw weapons of mass destruction from Saddam Hussein) and a domestic one (the arrest of oligarch Mikhail Khodorkovsky directly before selling the control stake in oil company Yukos to Texas-based ExxonMobil).

Apart from the French original, the book by Guy Mettan was published in Italian, Russian, Serbian and Chinese. According to the author, there are negotiations underway to publish his work in English and German, but the plans have not materialized yet for obvious reasons.