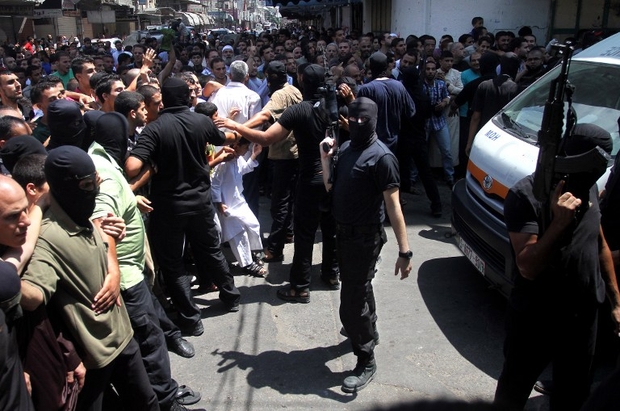 Hamas authorities in the Gaza Strip executed three men for murder on Tuesday, the territory’s attorney general said, signalling more could follow despite appeals from the United Nations for a halt.

The three men were put to death behind closed doors at dawn.

“To achieve public deterrence and curb crime, the competent authorities carried out at dawn on Tuesday, May 31, 2016 execution rulings against three of those convicted of shocking murders,” a statement from the attorney general said.

In theory, all execution orders in the Palestinian territories must be approved by president Mahmoud Abbas, who is based in the occupied West Bank.

But Hamas, which governs the Gaza Strip, no longer recognises his legitimacy, and the attorney general in Gaza, Ismail Jaber, recently announced that the authorities there would carry out executions without Abbas’s backing.

Xavier Abu Eid, an adviser to Abbas, condemned the executions on Twitter.

The UN envoy for the Middle East had previously called on Hamas to abandon the planned executions.

“I urge Hamas not to carry out these executions,” Nickolay Mladenov told the UN Security Council last week.

Human Rights Watch also condemned the use of the death penalty, with its Israel and Palestine director Sari Bashi calling it “particularly egregious to execute defendants sentenced in Gaza, whose court system is rife with coercion, torture and compromised procedures”.

The attorney general’s statement announcing the executions said they had all been given a fair trial.