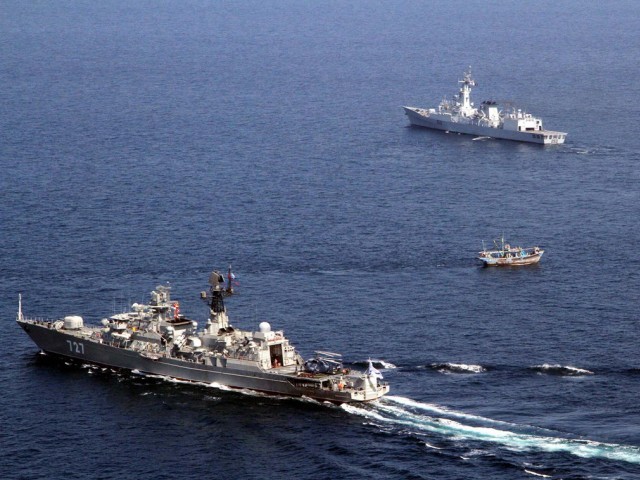 The third largest ocean in the world the Indian Ocean, which can be characterized as a gateway, links the East with the West and different regions of the world. The rising geopolitics in the Indian Ocean can be directed as a power struggle between states to increase their influence and impact in the region. The international world lately has been buzzing with assessments and critique on the Indian naval projection in Indian Ocean and also the sea-based nuclear deterrence around the region of Indo–Pacific.

Since the last decade the concept of Asian Century is been extensively used and the factors like increased economies, big markets, trade routes and access to resources and energy has shaped the geo-politics of Asia. The Indian Ocean encloses these rising economies and with that have the access to the necessary choke points. As Rear Admiral Alfred Mahan said, whoever attained the maritime supremacy in Indian Ocean will become an important actor internationally. Also, whoever controls the Indian Ocean will be dominating Asia. Today, Asia has the potential to be the biggest market economy and the Indian ocean is the key to all the seven sea of the world. In the twenty first century, the future of the world will be decided depending on these seven seas. Since then, the Indian Ocean has become a centre point for power struggle among many regional players.

Pakistan is troubled and worried by the latest Indian development in Indian Ocean, specifically the recent tests conducted by a submarine launched, nuclear capable ballistic missile. These gestures of India in the Indian Ocean, although are directed towards the Chinese modernizations of their naval forces, yet they disturb the delicate balance of strategic stability in South Asia. New Delhi has also confirmed the testing of a K4 missile also a submarine launched having the capacity to carry the nuclear warhead up to the range of 3500 km. The worrisome moment for Pakistan which is causing frequent frictions and has raised tensions among the international world is India did not informed Pakistan of these tests. As in 1988, both states: India and Pakistan have given a mutual understanding regarding prior information of each others missiles test. Another agreement was signed in 2005 between both states on the pre-notification on the ballistic missile test for the both states to avoid any sort of misunderstanding and direct confrontation.

The accelerated growth of India’s nuclear development and the nuclearisation of Indian Ocean will upset the strategic balance of South Asia greatly. The evolving nuclear dimensions in Indian Ocean is making Islamabad to jump in a new competition of nuclear race with its arch rival India, hence creating an alarming situation at the international arena.

Both states today are said to be building their naval forces. So far, India been the largest importer of weapon in South Asia, has already assigned around 16billion $ for the development of its nuclear submarines and the naval warships. There are also reports that suggest that India is also developing around 160 navy ships, few stealth destroyers and also anti-submarines corvettes. If the Pakistani side is viewed, Islamabad has just approved a proposal to buy diesel-electric submarines. If looked, eighteen years back, Pakistan was forced to be a nuclear weapon state when India first exploded its nuclear device in May 1998. Even that moment in 1988, Pakistan waited and looked unto the international community to take action against India but in vain Pakistan having no option became a nuclear weapon state. In the similar context, Pakistan today had requested United Nations not to let Indian Ocean be a nuclear zone. But Pakistan also needs to look for different avenues to neutralize the Indian developments in Indian Ocean by having a permanent solution to the existing problem: Pakistanis initiative for a submarine launched cruise missile (Hatf-7-Babur).

The explorations made by the Gulf States highlighted the worth of the Indian Ocean economically; however these explorations are also the biggest factor, which has caused such a power struggle in Indian Ocean. Today Indian Ocean has become a point of competition between China, India and Pakistan. The bilateral disagreements between China and India and also between Pakistan and India are acting as a catalyst which is escalating the nuclear activities in the region. Although, Pakistan has considered putting up a proposal calling for making Indian Ocean a Nuclear free zone might be difficult owing to its geographical importance and the ongoing power struggle.

The question which concerns many academicians and analysts and put against Pakistanis nuclear development is, if India’s nuclear development is aimed against China then why and for what Pakistan is entering into a nuclear race with India. The answer can be easily understood from taking an example from the past, India’s nuclear explosion of 1998 was directed against China’s explosion and as India felt vulnerable, they were compelled to make necessary steps to deter China. India’s explosion created a direct security dilemma for Pakistan whose sovereignty was put at stake. Also the fact that international community seemed to be at ease with the Indian nuclear explosion. It was not a knee jerk reaction for Pakistan to take such a decision but was compelled by the actions of India.

Today as Indians are forced to respond to the Chinese threat in sea based nuclear developments, Pakistan is also forced to respond to the threats which arise by the accelerated nuclear sea based growth of India to stabilize the unique line of deterrence, which India keeps upsetting and to keep a balance by reducing the possibility of a nuclear attack.