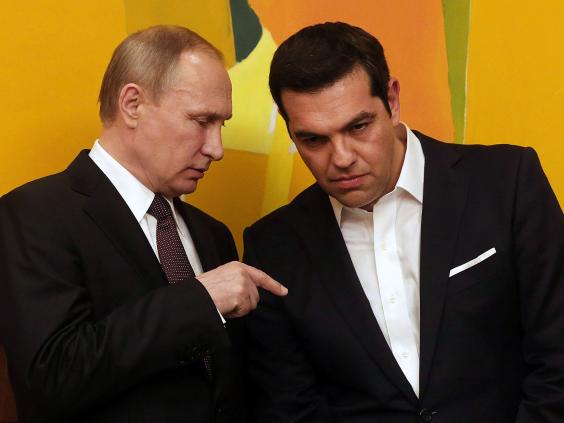 Russian President Putin’s visit to Greece yesterday was very symbolic on a number of aspects. First, it it is his first visit to EU since November 30 last year, when he took part in the UN climate conference in Paris. Second, the visit comes a only month before Brussels on whether to extend EU sanctions against Russia. Putin did not wait to reach Greece to announce a number of stands between Athens and Moscow; before the visit, the Russian President published an article in Greece’s Kathimerini newspaper, where he spoke about the negative effect of mutual sanctions. In his visit, Putin tackled with the Greek President Prokopios Pavlopoulos  the common moral values between the two countries, along with the economic goals, bilateral trade, and EU sanctions’ effects on strengthening Russia’s relations with Greece.

Greece and Russia: cooperation for peace and prosperity

In his article in Kathimerini newspaper, Putin tackled the issue of the EU sanctions being an obstacle towards more enhanced Russian-Greek relationships, especially on the economic level. He wrote: “These days, Greece is Russia’s important partner in Europe. Unfortunately, the decline in relations between Russia and the European Union stands in the way of further strengthening our cooperation, with an adverse effect on the dynamics of bilateral trade that fell by a third to $2.75 billion as compared to last year. Particularly affected were Greek agricultural producers.”

In 2015 trade between the two countries fell by 33.7 percent to about $2.8 billion. Ninety percent of that loss was exports from Russia to Greece. Russian imports from Greece decreased by 54 percent and amounted to $229.4 million.

In his article titled “Russia and Greece: Cooperation for Peace and Prosperity”, Putin also mentioned “Ahead of my visit to Athens, I would like to share with the readers of Kathimerini, one of the most popular and respected Greek newspapers, some ideas regarding the further development of the partnership between Greece and Russia, as well as about the situation on the European continent in general.

We value the centuries-old traditions of friendship between our peoples. Our cooperation rests on a rock-solid base of common civilizational values, the Orthodox culture and a genuine mutual affection. A vivid example of how closely our people’s lives are intertwined is the story of Ioannis Kapodistrias, who was a Russian minister of foreign affairs in the 19th century and later became a head of the Greek state.

The celebrations of the Millennium of Russian Monasticism on the Holy Mount Athos will be a landmark event this year. Throughout completely different periods of history, their moral courage, faith and patriotism helped our peoples to overcome severe ordeals and preserve their identity.

Hundreds of thousands of Russian tourists visit your country every year. They relax on the beautiful beaches, get acquainted with the rich heritage of the ancient Hellas and its legendary architectural monuments. Tourism makes a significant contribution to the economic development of Greece, as well as to broader direct people-to-people contacts and greater trust and friendship between our citizens.

In his meeting with the Greek President Prokopis Pavlopoulos, Russian President Vladimir Putin said that he believes in the importance of upholding common moral values by Russia and Greece.  “Quite probably. It’s not the dates that matter,” he said. “What really matters is our common moral and ethical values.”

Putin said that “Russia and Greece are developing very profound spiritual ties that are deeply rooted in history,” adding “We can see the pace, at which these events are moving on”.

He recalled the Years of Russian culture in Greece and Greek culture in Russia that were held simultaneously this year.

On the economic level, “Russia and Greece have good prospects for the development of economic ties”, Russian President Vladimir Putin said on Friday at a meeting with Greek Prime Minister Alexis Tsipras.

He commented on the tendencies in the trade and economic cooperation between the two countries by saying “Of course, we have a lot of problems today and we are living through very difficult times but we do have perspectives.”

“In fact, we are going through uneasy times. This is connected with economy, and this is connected with issues of international security,” Putin said. He added: “I think that it is very important to compare positions, as they say, to talk, discuss all these issues, look for solutions to these problems.”

The Russian leader called to “transform the very good relations and feelings of the two nations into the sphere of economic and strategic development.”

The Greek President Prokopios Pavlopoulos said on Friday before talks with his visiting Russian counterpart Vladimir Putin that “Close and sincere cooperation between Russia, the United States and the European Union is needed to put an end to the war in the Middle East, in particular in Syria, once and for all.”, TASS reported.

In turn, Greek Prime Minister Alexis Tsipras has called the consolidation of ties with Russia a strategic choice for the Greek government.

“I’d like to stress that the strengthening of ties with Russia is a strategic choice for Greek government,” he said. “We have very tight religious and spiritual bonds and that’s why we have an opportunity in the future for a buildup of economic partnership and for a boost to stability and peace in the region,” he said at a meeting with Putin.

“No Future for Europe with EU and Russia at loggerheads”

Tsipras also said that “Western sanctions against Russia are not productive.” His words come weeks before the European Union is on track to renew them.

“We have repeatedly said that … the vicious circle of militarization, of Cold War rhetoric and of sanctions is not productive,” Tsipras told reporters during a visit by Russian President Vladimir Putin to Greece. “The solution is dialogue.”

“Everyone recognises that there cannot exist a future for the European continent with the European Union and Russia at loggerheads,” Tsipras said.

The EU slapped sanctions on Russia after Moscow annexed Crimea from Ukraine in March 2014. The 28-strong EU needs unanimity to keep the sanctions in place and the bloc’s unity has been increasingly tested on that.

A day before Putin’s visit to Greece, Russian presidential aide Yuri Ushakov said that “Russia and Greece consider as important their cooperation in the energy sphere and continue work on oil deliveries to Greece and Italy through third countries.”

“As I have said, energy plays a key role in our trade and economic relations and work is currently under way on the project of gas deliveries from Russia to Greece and Italy through third countries in the sense that the gas pipeline will run along the bed of the Black Sea and then across the territory of a coastal country, apparently, Bulgaria, and farther to Greece and then Italy,” Ushakov said.

He expected eight documents in total to be signed during Putin’s visit to Greece.

Besides the Rosneft agreement the parties are to sign a declaration on partnership for modernization, interdepartmental memorandums on interregional cooperation, action program for tourist sector for 2016-2017 and a number of other documents, he said.