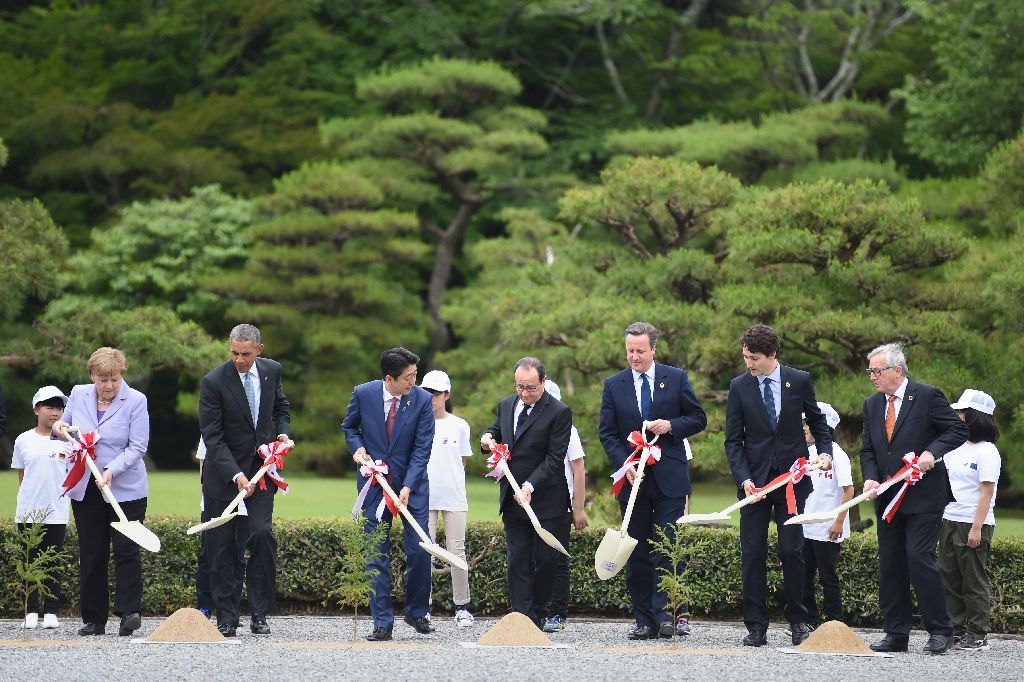 World leaders kick off G7 talks with economy in focus

World leaders kick off two days of G7 talks in Japan on Thursday (May 26) with the creaky global economy, terrorism, refugees, China’s controversial maritime claims, and a possible Brexit headlining their packed agenda.

Heads of state and government from the United States, Britain, France, Germany, Italy, Canada and host Japan are meeting in Ise Shima, a mountainous, sparsely populated area about 300 kilometres southwest of Tokyo.

The group, including US president Barack Obama – whose historic visit to atomic-bombed Hiroshima threatens to overshadow the talks – will spend Thursday morning at Ise Jingu, a huge shrine complex that sits at the spiritual heart of Japan’s native Shintoism.

In line with the animistic religion’s traditions, the buildings are regularly replaced, but the shrine is believed to have occupied the same spot for more than 2,000 years.

Prime Minister Shinzo Abe’s decision to take his counterparts to the sprawling site has attracted some controversy, however, due to its nationalist overtones.

The sputtering global economy was expected to take centre stage when the formal talks get under way in the afternoon, although divisions were likely to remain over whether the world should spend or save its way out of the current malaise, with Japan and Germany at odds on the issue.

China, the world’s second largest economy, will not be present, but it looks set to loom large over discussions.

Japan and the US are keen to corral support for a growing pushback against Beijing’s territorial assertiveness in the South China Sea.

The G7 will also discuss the refugee crisis and Islamist terrorism, with France’s Hollande keen to address the issue after a brutal year that saw France hit twice by jihadists.

Security was tight across Japan, with thousands of extra police drafted in to patrol train stations and ferry terminals. Tokyo said it was taking no chances in the wake of terror attacks that struck Paris and Brussels in recent months.

Dustbins have been removed or sealed and coin-operated lockers blocked at train and subway stations in the capital and areas around the venue site. Authorities said they will be keeping a close eye on so-called “soft targets” such as theatres and stadiums.

Britain’s referendum next month on whether or not to stay in the European Union is sure to figure prominently in discussions, as economists warn a so-called Brexit could dent the global economy.

Following the talks, Obama will move on to Hiroshima, becoming the first sitting US leader to travel to the city, the site of the world’s first nuclear attack, on Aug 6, 1945.

Obama arrived in Japan after spending several days in Vietnam, where he urged the communist authorities to embrace human rights and abandon authoritarianism.