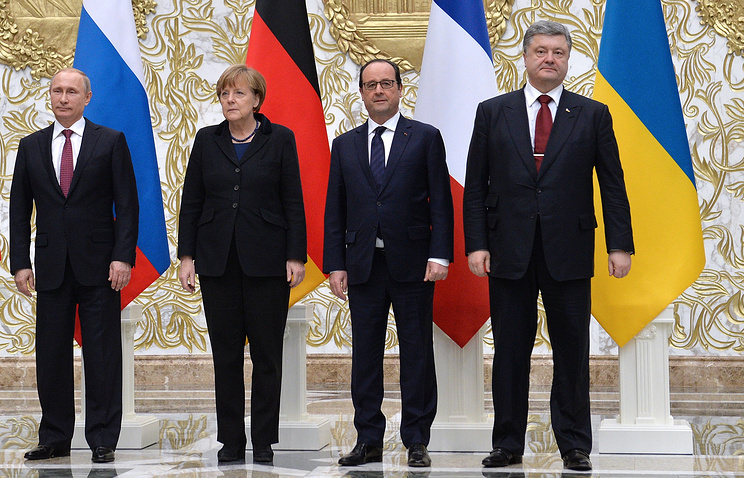 Leaders of the Normandy Four countries (France, Germany, Russia and Ukraine) have called for the full implementation of the Minsk peace agreements on Ukraine, the press service of the Elysee Palace has said.

French President Francois Hollande and German Chancellor Angela Merkel held a phone conversation on Tuesday with Russian President Vladimir Putin and his Ukrainian counterpart Petro Poroshenko. “The three presidents and the chancellor reiterated their commitment to the Minsk agreements and also their determination to do everything so that they are implemented in full and as soon as possible,” the statement said.

Hollande’s press service said the Normandy Four leaders “stressed the importance of fulfilling all the measures needed for maintaining the ceasefire regime in Ukraine’s east starting from withdrawing weapons, planning to pull out military units and releasing prisoners of war.”

“They also assessed the work done on various political issues, in particular, preparing for holding local elections in Donbass in accordance with the Ukrainian legislation and the standards of the Organization for Security and Co-operation in Europe,” it said.

Local elections in Donbass are envisaged by the Minsk accords signed on February 12, 2015, after negotiations in the so-called “Normandy format” in the Belarusian capital Minsk, bringing together Putin, Hollande, Merkel and Poroshenko. The package of measures also envisages ceasefire, weaponry withdrawal, prisoner exchange, constitutional reform in Ukraine and establishing working sub-groups on security, political, economy and humanitarian aspects of the Minsk accords.

The Kremlin press service said during the phone conversation Putin indicated that the package of proposals on local elections, the special status, amnesty, and decentralization had been coordinated with the leadership of the self-proclaimed Donetsk and Lugansk People’s Republics and it would make sense for the Contact Group in charge of attaining peace settlement of the conflict in eastern Ukraine to scrutinize them. The sides also exchanged views on possible steps towards resolution of acute social, economic and humanitarian problems in eastern Ukraine.