Home » Manchet 1 » First-Time Voters in South of Lebanon: These are the Municipalities we want! 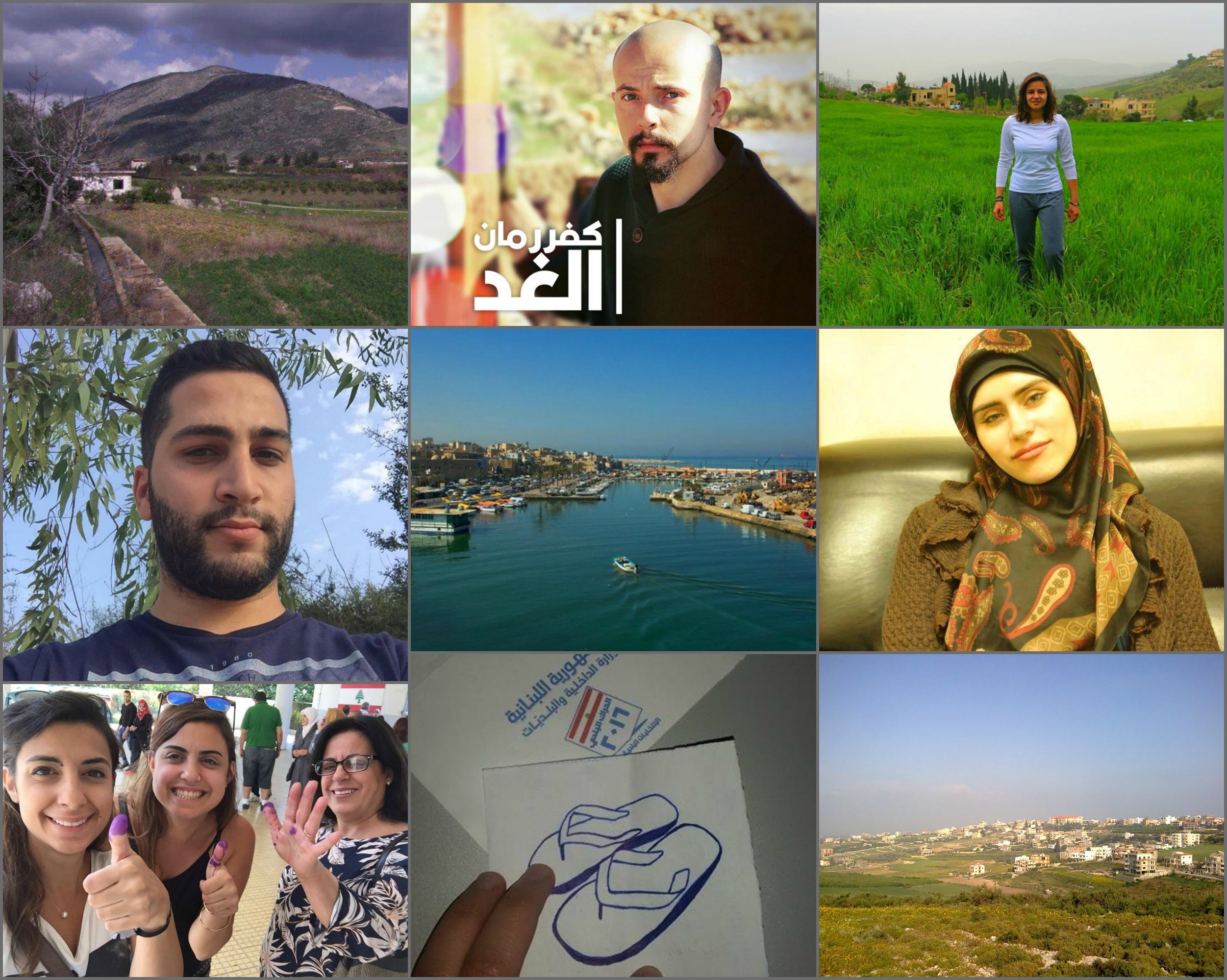 First-Time Voters in South of Lebanon: These are the Municipalities we want!

The Municipal elections in Lebanon, which started 3 weeks ago, and are still on, have been the “talk of the town” recently. Many Lebanese young people voted for the first time in these elections. 2016 held a new experience for them, and each saw it from his/her perspective. “Russia-Now” asked first-time voters about this new experience… about voting, and participating in “democratic” elections.

Many young voters thought that it was a way to express their opinion, and to be part of the decision-making process, even if the lists or candidates they voted for, did not win. Others, chose not to vote, for a number of reasons. Here are the various answers we got from first-time voters:

Noor, majors in Journalism, and has a great passion for photography.

Noor Rmeity Daher voted for the first time in her town Dibeen in Marjeyoun. She told us that the election process was so easy, but the 21-year old lady voted in an unusual way. She drew a slipper and placed in the voting box. But why? She answers us that “We just hear promises, with no actions being done”, adding that “I did not find any candidate or list that can represent me in the best way possible in the municipality”.
Noor describes the electoral center, and tells us about the flags belonging to various political parties being in it. She is shocked: “Should there be these kinds of flags in a school (electoral center)??”

This is how Noor Voted.

She is so mad that the only school in her town “has turned into a dumpsite, and into a place where people smoke the Hubble bubble “narjileh”.
The nearest schools to Dibeen, she says, are in the towns of Blat, Jdeidat Marjeyoun, and in Khiyam.

We ask her if she is hopeful that everything will be better in her town. “As long as the political parties are the only ones to form lists in the elections, I do not have hope”, she says. Noor would like to see young men and women in her town’s municipality. But weren’t there young candidates in these elections? “Of course there were, but they belong to political parties, and none of them is thinking of the town’s interests over his/her personal interests”.

The only school in Dibeen (photo from Dibeen page on “Facebook”).

Hasan Salameh (29 years old) from Kfarroumman, voted for the first time. He was permitted to vote in the previous elections, but he did not, because the candidates back then, did not represent him well. This year, he found the “right” representatives in his town’s municipality, and he had a great hope that they would win (3 of them won, according to the final results).

The young man sees that his town needs a starting point, and he sees that it is essential that everyone does “self-criticism”, and thinks outside the box”. Salameh tells us “everyone in Kfarrouman should view the candidates as individuals, not as family members or member of the same “sect” or political views”.

He says: “Unfortunately, the municipality has become a goal by itself, instead of the people’s needs and town’s needs being the utmost goal”, adding that “the list he voted for “Kfarroumman al-Ghad” did not raise any flag for any political party, and its members are focusing on their ability to make a change in their town, while the other list, which has been in the municipality in the previous years, proved that it is careless about the town’s needs, and they just focused on accomplishing the needs of their own families”.

We asked Hasan what he wants to see in his town, and he answered us “I would like to see civic organization, a public library, a waste treatment plant, using agricultural land, and awareness workshops on making Kfarroumman more civilized”.

We asked Hasan if he would live in his town if the services he needs were provided in it. He tells us that his field of work (cinematography) requires a lot of travel and moving from one area to another. He adds: “I don’t mind living anywhere, but I chose Beirut because it’s close to all areas in Lebanon and everything is accessible”.

Since the beginning of 2016, Hasan hasn’t stayed in Beirut, and he kept moving from the south of Lebanon to the north to Beirut, Bekaa, and Mount Lebanon, because he works in films and stays where he’s filming for a while, but he returns to his home in Beirut.

Dana Arnaout: 133 US Dollars/vote in Saida

Dana Arnaout, voted for the first time in her hometown, Saida. She describes the electoral process as “calm”, expect for “some pressuring that has been done against voters from supporters of different lists to vote for certain candidates.

The young lady reported violations she witnessed. Some people were telling her “come on! It’s so easy, you can just vote for this list”, while Dana actually wanted to vote for a few candidates only.

Dana, with her mum and sister, after voting in Saida. (Photo from Dana’s “Facebook” Profile).

Another violation, she says, is that “there is no space on the papers with the candidates’ names on them, so we cannot add any name, and erase another, but would be obliged to write all the candidates on a separate piece of paper”.

She was really glad to vote, “especially that we were deprived from our right to vote for members of the Parliament”, Dana says. She sees that it has become more than essential to “have a new electoral law as soon as possible”.

Arnaout also confirmed the presence of “bribery in elections”, and said that “Some people were getting paid 200,000 L.L. (133 US Dollars) to vote for certain lists”. She does not believe that “any action would be taken against those who paid for voters to vote for them, because it already happened in Beirut, and the Lebanese Association for Democratic Elections (LADE) reported the violations, but no actions were taken”.

Dana did not entirely give-up, but at the same time, she sees that “she should express her opinion through voting”.

“We cannot swim in our own Beach”

What does she want for her city, Saida? She answers: “I would like to see public gardens in my city, we have a few, but they are nothing compared to the number of residents here”, adding that “the garden that was established instead of the Saida landfill by the Head of the Municipality in Saida Mohamad al-Saudi “smells like shit” “.

Dana continues: “What else do we want? The Old souk in Saida with no electricity bars, better electricity supply and water supply, better roads that do not ruin our cars every time we pass by them”.

The 25-year old Journalist wishes that she could stay in Saida, but she has already based all her life in Beirut. She finds it so difficult to go to and fro her hometown every day, and at the same time hopes that there would be de-centralization”. Arnaout is one of many young men and women who left Saida to work in Beirut, and some of them even travelled to find better job opportunities.

Hassan Hamdan (27 years old), from Kfar Melke, tells us that the electoral process in his town was “very organized”.

Photo posted by Hassan on his “Facebook” Profile in Kfar Melke, his town.

“There was no difficulty through my first-time voting, but the amount of people who keep telling you to vote for certain lists or candidates are far too many, especially in electoral centers”.

It was forbidden to have a phone inside the electoral center the young man voted in.

He answers our question over what he thinks his town needs: “We need more job opportunities, so that young men and women stay in Kfar Melke, and do not go to Beirut to find job vacancies there”.

He tells us that “He would live in his town if he finds a job opportunity near it, and if an “appropriate” transportation network was organized”.

Zeinab Sroor: This is why I did not vote in Bazourieh

Zeinab: “voting for a municipality while having an extended parliament, means “legitimatizing that parliament”.

Zeinab Sroor chose not to vote in the first time she was permitted to vote in her town, Bazourieh. She explains that the reasons for not voting are that “we are supposed to vote according to where we live, and not according to our registration number, especially that the idea of a Municipality is getting the services we need”. She adds that “we are paying taxes for the municipality in our place of residence”.

In addition to these reasons, Zeinab sees that “voting for a municipality while having an extended parliament, means “legitimatizing that parliament”.

The 25-year old lady believed that “the Capital (Beirut) is supposed to be for working and not for living”, adding that “if we were in a state that provides an appropriate transportation network, people would have left their towns in the morning to go to work in Beirut, and they would return in the same day to their towns”. “Unfortunately, this is not provided in Lebanon, and it does not seem like it will be provided anytime soon”, she says.

She sees that it is very difficult to find a job opportunity in her town, due to her career (journalism).

Many first-time voters are ambitious, and thirsty for change. They are not attached to any sectarian or family criteria while voting. Unfortunately, the Lebanese state has not yet been able to provide the services needed in towns, and cities, for people to live wherever they want. While violations are still taking place in the elections, people are being more aware of who to vote for, why, and what, will electoral programs lead to. First-time voters are the voice of their towns, and the upcoming change.