Home » Manchet 2 » ‘Smoke on board’ EgyptAir plane before crash 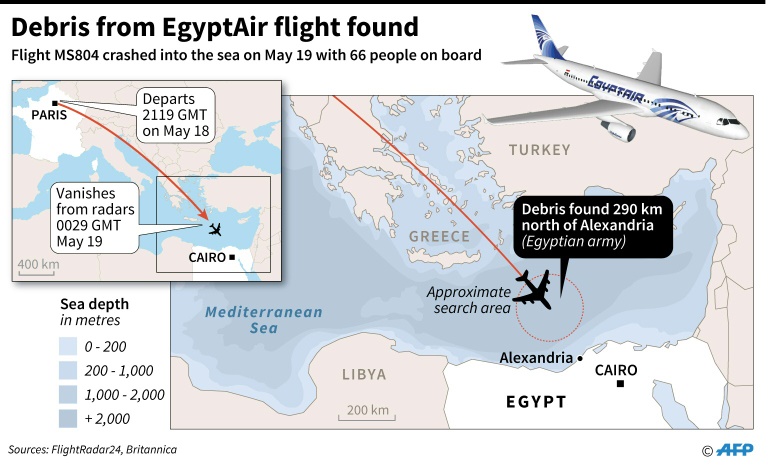 ‘Smoke on board’ EgyptAir plane before crash

Smoke was detected inside an EgyptAir plane shortly before it plunged into the Mediterranean with 66 people on board, investigators said on Saturday (May 21), offering clues but no answers about why it crashed.

The Airbus A320 had been flying from Paris to Cairo early on Thursday when it plummeted and turned full circle before vanishing from radar screens, without its crew sending a distress signal.

Debris including what appears to be the shredded remains of a seat and a safety vest.

While the information may help investigators, more wreckage including the black boxes will need to be found before they can piece together what happened.

“There were ACARS messages emitted by the plane indicating that there was smoke in the cabin shortly before data transmission broke off,” a spokesman for France’s Bureau of Investigations and Analysis told AFP.

It was “far too soon to interpret and understand the cause of the accident as long as we have not found the wreckage or the flight data recorders”, he said.

An Egyptian aviation ministry statement also said it was too early to draw any conclusions based on a “single source of information such as the ACARS messages which are signals and indicators that may have different causes”.

Search teams were scouring the eastern Mediterranean on Saturday for more parts of the plane and the black boxes.

While Egypt’s aviation minister has pointed to terrorism as more likely than technical failure, French Foreign Minister Jean-Marc Ayrault said Saturday that nothing was being ruled out.

“At this time … all theories are being examined and none is favoured,” he told a news conference in Paris.

The disaster comes just seven months after the bombing of a Russian airliner over Egypt’s Sinai peninsula in October that killed all 224 people on board. The Islamic State group was quick to claim responsibility for the attack, but there has been no such claim linked to the EgyptAir crash.

Relatives of the passengers gathered at a hotel near Cairo airport on Friday after meeting airline officials as they struggled to come to terms with the catastrophe. “They haven’t died yet. No one knows. We’re asking for God’s mercy,” said a woman in her 50s whose daughter had been on board.

EgyptAir Holding Company chairman Safwat Moslem told AFP on Saturday the priority was finding the passengers’ remains and the flight recorders, which will stop emitting a signal in a month when the batteries run out.

“The families want the bodies. That is what concerns us. The army is working on this. This is what we are focusing on,” he said.

Relatives and friends of passengers comfort each other during prayers at Abou Bakr el-Sedek mosque in Cairo.

A French patrol boat carrying equipment capable of tracing the black boxes was expected on Sunday or Monday.

The plane disappeared between the Greek island of Karpathos and the Egyptian coast in the early hours of Thursday.

Experts stressed there was not enough information yet to explain the incident.

“All you can say … is that there was smoke. The smoke could be due to a fire in the plane following a technical problem, or it could also mean an explosion… but it is far too early to formulate hypotheses,” Jean-Pail Troadec, a former BEA director, told AFP.

“The fact that there was no distress call doesn’t necessarily mean anything. The pilots maybe had other things to do, reacting to the event. Sending a message is not the first priority.”

Personal belongings and parts of the Airbus A320 had been spotted by teams searching the sea off Egypt’s northern coast about 290 kilometres (180 miles) from the city of Alexandria, Egypt’s military said.

Kammenos said the search teams, which include multinational aircraft and ships, had found “a body part, two seats and one or more items of luggage”.

Seven crew and three security personnel were also on board.

The European Space Agency said one of its satellites on Thursday spotted an oil slick about 40 kilometres southeast of the plane’s last known location.

In October, foreign governments issued travel warnings for Egypt and demanded a review of security at its airports after the Islamic State group said it downed the Russian airliner over Sinai with a bomb concealed in a soda can.

IS has been waging a deadly insurgency against Egyptian security forces and has claimed attacks in both France and Egypt.