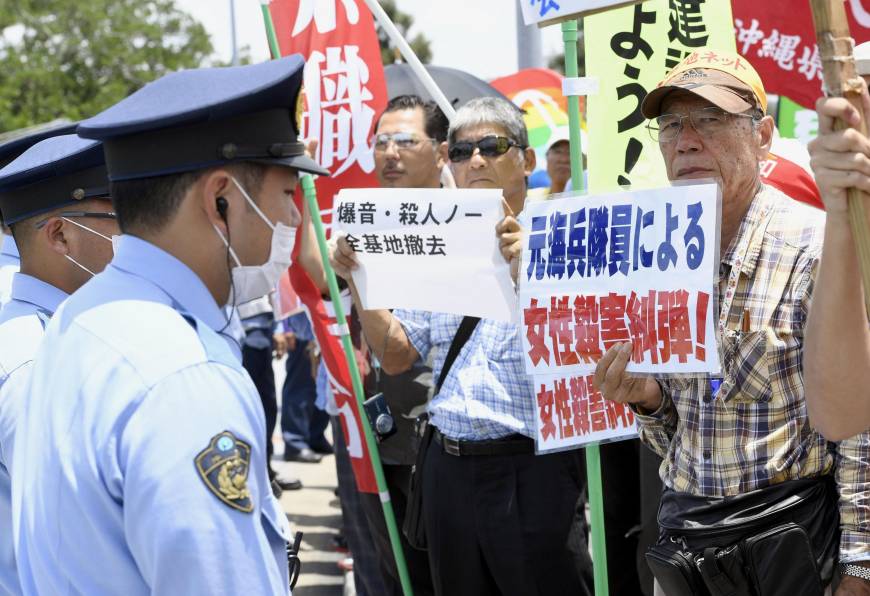 Japanese officials protested to the United States on Friday after the police arrested a man identified as a former American Marine in connection with the killing of a woman on the island of Okinawa.

“I am extremely upset. I have no words,” Prime Minister Shinzo Abe told reporters at his residence on Friday morning. “I demand that the United States take strict measures to prevent something like this from happening again.”

The suspect was identified by the Okinawa police as Kenneth Franklin Shinzato, 32. He was arrested Thursday after he admitted strangling a 20-year-old woman, Rina Shimabukuro, and dumping her body in a weeded area near her home in the town of Uruma, according to news reports.

The reports were based on background briefings by the police and prosecutors and could not be independently verified.

Ms. Shimabukuro was reported missing on April 29. Her boyfriend told the police she had disappeared the previous night after texting him to say she was going for a walk, the news reports said.

Crimes committed by Americans have long been a source of friction on Okinawa, a small southern island that hosts about half of the roughly 50,000 United States military personnel stationed in Japan.

The most notorious episode, the rape of a 12-year-old schoolgirl by three American servicemen in 1995, set off mass protests against the United States military presence.

The latest episode comes just a week before President Obama is scheduled to travel to Japan for a meeting of leaders from the Group of 7 leading industrialized countries. The trip is already politically sensitive because Mr. Obama plans to visit Hiroshima, site of the United States nuclear bombing at the end of World War II. He will be the first sitting American president to do so.

Japan’s foreign minister, Fumio Kishida, summoned Ambassador Caroline Kennedy on Friday to protest the killing on Okinawa, which he called “an extremely cruel and atrocious crime.” Okinawa’s governor, Takeshi Onaga, who has campaigned to reduce the American military presence on the island, told reporters on Thursday night that the crime had left him “speechless.”

“This incident has occurred precisely because the base is there,” Mr. Onaga was quoted by the local news media as saying. “I don’t know what to do with this anger.”

Mr. Shinzato is no longer a Marine but is employed in a civilian role at Kadena Air Base, a United States Air Force facility on Okinawa, the police said. He was questioned by the police after his car was spotted on security-camera footage taken near the area where Ms. Shimabukuro is believed to have disappeared, news reports said.

DNA matching Ms. Shimabukuro’s was found in the car, according to the reports.

Mr. Shinzato was arrested on suspicion of illegally disposing of a body, a common early step in murder investigations in Japan. The police can hold suspects for several weeks before pressing formal charges.