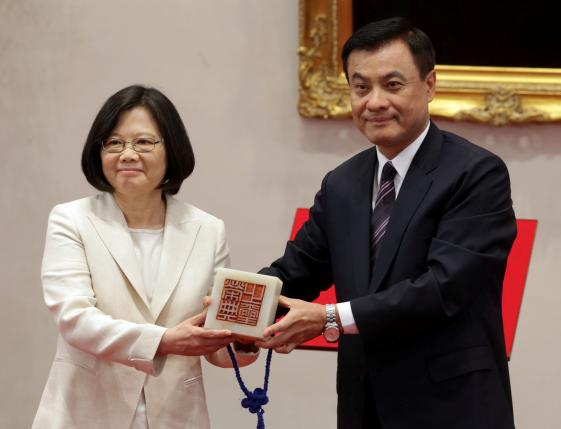 Taiwan’s new president urged China on Friday to “drop the baggage of history” in an otherwise conciliatory inauguration speech that Beijing’s Communist Party rulers had been watching for any move towards independence.

President Tsai Ing-wen was sworn in with Taiwan’s export-driven economy on the ropes and giant neighbor China looking across the Taiwan Strait for signs of creeping independence or anti-Beijing sentiment that could further sour economic ties.

Tsai’s Democratic Progressive Party (DPP), which has traditionally favored independence from China, won parliamentary and presidential elections by a landslide in January and takes over after eight years under China-friendly Nationalist Ma Ying-jeou.

Tsai, Taiwan’s first female president, said Taiwan would play a responsible role and be a “staunch guardian of peace” in its relationship with China.

“Cross-Strait relations have become an integral part of building regional peace and collective security,” she told thousands of people outside the presidential office.

“The two governing parties across the Strait must set aside the baggage of history and engage in positive dialogue for the benefit of the people on both sides,” she said.

There was no immediate reaction to Tsai’s speech from China, which has never renounced force to take back an island it regards as a renegade province. Beijing said earlier this month the new Taiwan government would be to blame for any crisis that might erupt.

Tsai pledged to abide by the constitution of the Republic of China, Taiwan’s formal name, and promised to safeguard the island’s sovereignty and territory.

She also mentioned the East China and South China Seas, where an increasingly muscular China has been at odds over territorial claims with its neighbors.

“Regarding problems arising in the East China Sea and South China Sea, we propose setting aside disputes so as to enable joint development,” she said.

The American Institute in Taiwan, which represents U.S. interests in the island in the absence of formal diplomatic ties, said it looked forward to working with the new government.

The United States switched diplomatic recognition from Taiwan to China in 1979 but is also Taiwan’s biggest ally and arms supplier.

China is deeply distrustful of Tsai’s DPP, whose charter includes a clause promoting “a sovereign and independent Republic of Taiwan”.

Chiang Kai-shek’s Nationalists fled to Taiwan after losing the civil war to the Communists in China in 1949. China has pressured the new Taiwan government to stick to the “one-China” principle agreed with the Nationalists.

That allows each side to interpret what “one China” means.

Voted in by a Taiwanese public distrustful of growing economic dependence on China, the DPP also champions Taiwan’s own history. There were massive protests in 2014 that stalled a trade pact with China and were a key element of the DPP’s rise.