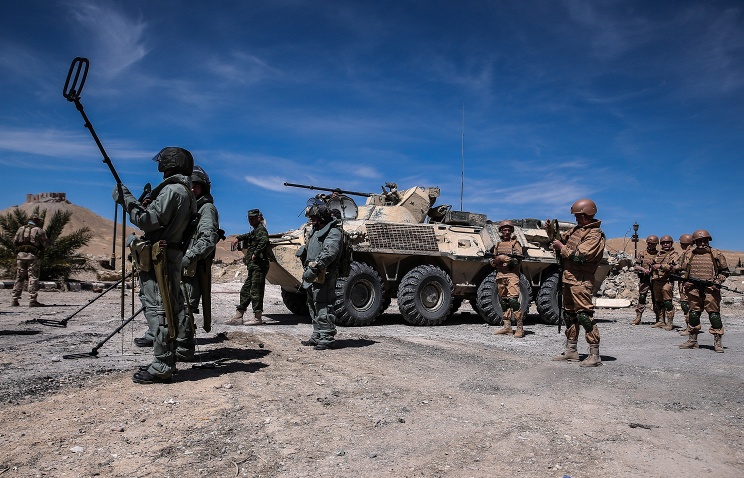 The Importance of a Russian Military Base in Palmyra

What do the Satellite Images Signify?

Russian Defense Ministry spokesman Maj. Gen. Igor Konashenkov said Tuesday that “these claims are false”, adding that “There have been no and are no ‘new Russian bases’ on the territory of Syria’s Palmyra”, clarifying that “the satellite photographs of the area’s territory, published by UNESCO and mentioned by the agency… feature a temporary camp of units of the International Anti-Mine Center of Russia’s Armed Forces, which earlier engaged in mine clearing in the historical part of Palmyra”.
Russian News Agency TASS reported that the general was commenting on AP’s reports citing a US cultural heritage protection organization that Russia’s military are building a new military base in Palmyra, as well as on the publication of a satellite image of a military town in close proximity to the cultural facilities.

“The deployment of the temporary camp until the end of the mine clearing effort has been agreed with the Culture Ministry and other state institutions of the Syrian Arab Republic,” Konashenkov said.
Economically Feasible?

Igor Konashenkov said in early May that having another base in Syria would not be economically feasible for the Russian Aerospace Forces.

“There’s absolutely no need for that. This is not expedient even economically,” Konashenkov told the media in reply to a question.

He explained that practically all aircraft based at Hmeimim had a range long enough to reach any point of Syria. The air facility is totally self-reliant. All crucial supplies, such as fuel, ammunition and other items are delivered from Russia. Planes and helicopters undergo all maintenance and repairs locally.

The Importance of a 5th Military Base

Palmyra, the ancient Semitic city, which was declared a World Heritage Site by the UNESCO in 1980, was captured by ISIS, and a large part of its ruins were destroyed in August 2015. The Russian Military assisted the Syrian Army in liberating Palmyra, and Russian engineers have been de-mining large areas of land in that city.

Palmyra is 215 km northeast of the Syrian capital, Damascus, and 740.9 km away from Iraq, which means that Palmyra is in the middle of Syria, and it is of a desert-like nature, and it is not located near the sea. So what is the importance of establishing a 5th Russian military base in Syria? “Russia-now” conducted a phone call interview with a military expert, who preferred to stay anonymous, in order to be more informed about this issue.

The military expert explained that “In case a Russian Military base was established in Palmyra, it would be highly symbolic, for the following reasons:

Recently, more than 4,000 Russian military experts, including technicians, pilots, engineers, and Russian soldiers arrived to Syria, to assist the Syrian Army.
In general, the establishment of a 5th Russian military base in Syria is a military fortification for Russia.