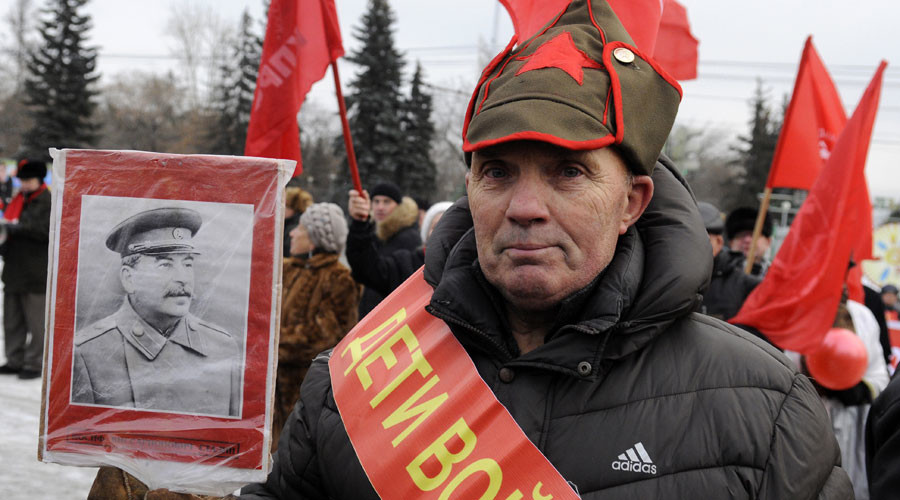 Communists to use Stalin image in upcoming Russian parliamentary polls

Russia’s Communist Party intends to use Stalin’s image to boost its popularity among voters ahead of September’s parliamentary elections, a popular business daily reports, quoting a source in the party.

“Stalin’s image will be used in election campaigns and it is capable of attracting additional votes from people who don’t belong to the nucleus of our electorate,” the Communist Party’s secretary for information work and elections technologies, Sergey Obukhov, told Kommersant Daily newspaper. The politician added that he did not exclude the possibility that other parties, including the current parliamentary majority party United Russia and its allies, would use Stalin’s image in their campaigns.

Communist Party official Dmitry Novikov said the organization intended to look into the latest initiatives launched by its regional conferences, including the use of Joseph Stalin’s image in propaganda, installing monuments to the Soviet dictator, and making proposals to denounce the decisions of the 20th congress of the Communist Party of the Soviet Union (CPSU) – the 1956 event that condemned Stalin’s personality cult. Novikov also added that the main election program of his party contained a section on promoting the “new industrialization of Russia” using Stalin’s experience.

The proposal to question the decisions of the 20th congress of the CPSU was passed earlier this week by the Communist Party branch of the Penza Region and forwarded to the organizers of the Communist Party Convention scheduled for late July. First secretary of the regional party committee, Georgy Kamnev, explained the initiative by the fact that the 1956 report in which CPSU leader Nikita Khruschev acknowledged the numerous wrongdoings committed during Stalin’s rule “contained a lot of lies and slander, caused by the contemporary political situation.”

In December last year, Penza Communists announced a plan to mark the 80th anniversary of the 1936 USSR Constitution by declaring 2016 the “Year of Stalin” and opening a museum dedicated to the Soviet dictator. Back then, Kamnev told the press that his comrades deemed this step necessary because of the growing number of attacks on Stalin and on his period in Soviet history, and promised to actively promote historical facts about this time and about Stalin’s personality.

Stalin’s name and image is a popular tool in the Communists’ arsenal as it rarely fails to attract media attention and provoke rows with libertarian sections of Russian society. For example, in February 2015 Communist Party leader Gennady Zyuganov appealed to President Vladimir Putin to rename the city of Volgograd as “Stalingrad,” and also to build a monument to Stalin in Moscow and name a square after him there.
A public opinion poll conducted by the independent Levada Center in December 2015 showed that public support for Stalin’s personality and approval for his policies have increased, but that the attitude to Stalinism in society remains balanced.

According to the research, 34 percent of Russians hold that leading the Soviet people to victory in the Second World War was such a great achievement that it outweighed Stalin’s mistakes. Twenty percent of respondents said that in their opinion Stalin was a wise leader who made the Soviet Union a powerful and prosperous nation, with 12 percent of the belief that Russia needs another leader similar to Stalin, and that sooner or later such a person will appear and “restore order in the country.”

At the same time, 21 percent of Russians agreed that Stalin was “a cruel and inhumane tyrant responsible for the killings of millions of innocent people,” and 13 percent blamed Stalin for insufficient measures to prepare the USSR for Hitler’s invasion.