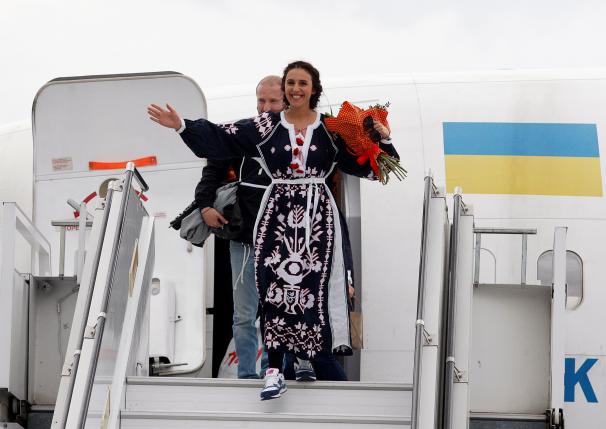 Ukrainian politicians hailed their country’s surprise weekend victory in the European Song Contest as a continent-wide endorsement in their smoldering conflict with Russia, while Moscow said the competition had been hijacked by politics.

Ukrainian singer Jamala overtook the bookmakers’ favorites, Russia and Australia, to win the normally light-hearted contest with the song “1944” about the war-time deportations of ethnic Tatars from Ukraine’s Crimea peninsula by Soviet dictator Stalin.

The singer, herself of Crimean Tatar descent, had drawn parallels in interviews to Russia’s annexation of Crimea in 2014, which provoked Western condemnation of the Kremlin and was opposed by many in the region’s Tatar minority.

Under Eurovision rules, her victory on Saturday evening means the 2017 contest will take place in the Ukrainian capital. One pro-Kremlin politician in Moscow suggested Russia might boycott the event next year.

After the results were announced in Stockholm, Ukrainian President Petro Poroshenko wrote on Twitter: “Personally congratulated Jamala with the victory. Today her voice spoke to the world on behalf of the entire Ukrainian people. The truth, as always, prevailed!”

Ukraine’s victory, 12 years after it last won the Eurovision title, lifted the mood of people worn down by two years of conflict with Russian-backed separatists in the east as well as political crises, corruption and poverty nationwide.

“It is a great win, and a very timely one. People need such things these days,” said Nikolay, a student from Kiev who only found out about it when a friend showed him a clip on her phone.

Nastya, a barista also from Kiev, had watched the contest through the night. “I am so happy,” she said. “It is a small victory for Ukraine, it strengthens the spirit of our people.”

Greeted by singing and cheering fans on her arrival in Kiev on Sunday evening, Jamala said the win was double-edged.

“I think it’s a big opportunity for us and at the same time it is a huge responsibility because Europe trusted us,” she said.

Asked if next year’s event could be held in Crimea, she said: “It’s hard to see that happening for the time being”.

Ukraine marked an annual day of remembrance for victims of political repression on Sunday — including Soviet purges of Crimean Tatars and other groups on Ukrainian soil.

Tatars, a Muslim people indigenous to the Black Sea peninsula, now number about 300,000 in a population of 2 million. While many Crimean residents want to be ruled by Moscow, many Tatars are still mistrustful of the Kremlin after the wartime deportations and have opposed Moscow’s annexation.

That has unleashed fresh tensions. Two weeks ago, the Russian administration in Crimea banned the Crimean Tatars’ highest ruling body, the Mejlis, and there have been accusations — denied by Moscow – of systematic persecution of the Tatars.

“We saw an incredible number of true admirers of Jamala’s talent, supporters of independent Ukraine, allies of the Crimean Tatar people,” he said in a Facebook post.

Several Russian politicians said a pop music contest which is supposed to be free of politics had been skewed by political considerations and anti-Russian stereotypes.

“Geopolitics won on aggregate. Political meddling triumphed over fair competition,” Konstantin Kosachev, head of the Foreign Affairs Committee of the upper house of the Russian parliament, wrote in a Facebook post.

Franz Klintzevich, another member of the Russian upper house of parliament, said he believed the Ukrainian hosts would exploit next year’s contest to advance their political agenda in their conflict with Russia.

“If nothing changes in Ukraine, I don’t think we should take part in this,” he was quoted as saying by RIA news agency.

Moscow denies annexing Crimea. It says the region’s people expressed their will to become part of Russia in a democratic referendum, and that it only sent in troops to make sure the popular will was respected.

Fighting between Ukrainian government forces and pro-Russian separatists in eastern Ukraine erupted soon after Crimea changed hands. More than 9,000 people have been killed and while a ceasefire agreed in February 2015 is largely holding, the two sides have yet to reach agreement on holding local elections.