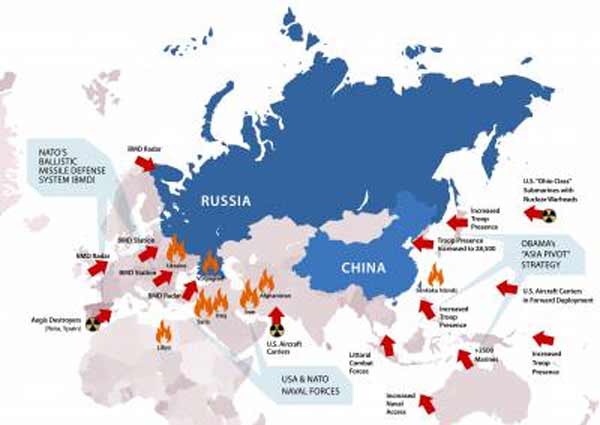 According to an article published April 23 by Deutsche Wirtschafts Nachrichten (German Economic News) US President Barack Obama “requires the active deployment of the Bundeswehr [armed forces of Germany, including the Army, Navy and Air Force] on NATO’s eastern borders “in Poland and the Baltic republics, and there joining the quadrupling of US forces near the borders of Russia.

This is an absolute violation of what the Russian leader Mikhail Gorbachev agreed in ending the Soviet Union and the Warsaw Pact – NATO mirror organization – and it is also the culmination of a process that began shortly after Gorbachev agreed to the conditions of America, which included that NATO “does not move an inch to the east”.

In addition, the DWN newspaper reported that on April 25, the President of the United States held a summit meeting in Hanover, Germany, with the leaders of Germany (Angela Merkel), Italy (Matteo Renzi) of France (Francois Hollande) and Britain (David Cameron). The alleged purpose of this meeting is to obtain an agreement to establish in countries neighboring Russia NATO military force in the five countries, a force threatening the Russian invasion, whether or when NATO decides later that he must respond militarily to the threat of Russia.

The encirclement of Russia by NATO, with forces that are hostile, is allegedly defensive – not offensive – against Russia, and is presented as such by our media. During the Cuban missile crisis in 1962, JF Kennedy did not consider Nikita Khrushchev’s plan to install a nuclear missile base in Cuba as being defensive on the part of the USSR – and even the Russian president Vladimir Putin does not consider the US operation, otherwise broader encirclement of Russia as a defensive operation. The US government and NATO act as if Russia threatened, rather than considering that they are themselves a threat to Russia in the surrounding – and the media turns this lie as if he s ‘was a truth worthy of being taken seriously. In fact, NATO is already installed on the western border of Russia.

Obama therefore now adds to economic sanctions against Russia, it imposed because of allegedannexation of the Crimea, after the US and the EU have engineered a coup to overthrow the ally Russia, Viktor Yanukovich, who headed Ukraine until February, 2014.

While surveys in Crimea, sponsored by the West, both before and after the coup, had shown that over 90% of Crimean wanted to join Russia, and just after they voted overwhelmingly to join Obama launched sanctions against Russia. Nuclear weapons were prepared, both on US-EU states that the Russian side for a possible nuclear war.

This is not a simple restoration of the Cold War – supposedly based on ideological disagreement capitalism-communism; it is to set up forces for a possible invasion of Russia, simply – a brutal conquest – although no major mass media in the West does not report this fact as it is.

The current preparation does not necessarily mean that a nuclear war will ensue. Russia could accept, whatever the demands of the West, and thus lose its sovereignty. Moreover, if Russia clings to his ground and refused to yield its national sovereignty, the West – the US and its allies directions leadership in the country – could cease its threats still more sinister, and simply withdraw the borders of Russia.

Basically, since 2013, the leadership of the United States has decided to resume Ukraine and refused to recognize the right of the people of Crimea to reject the new submission in Kiev and decide its own future. In late February 2014, the Russian leadership has decided to protect the Crimean type of invasion which took place later in the old Donbass region of Ukraine, where opposition to the coup Obama was even more intense.

The West continues to assert that Russia has, in some way wrong in this case. However, given that even the head of Stratfor described what Obama did in Ukraine “the most blatant coup in history” and that the fact that this is a coup orchestrated by the United States has been well documented on mobile phones and other videos, and the most careful academic survey that was conducted on the issue. Even Petro Poroshenko, President of Ukraine and participating in the event, recognized as a coup. And since then, evidence has been made on the Internet, the preparations of the Embassy of the United States, from 1 March 2013 to the coup of February 2014. The surveys sponsored by the US government even showed that Crimeans overwhelmingly rejected the coup and wanted to join Russia.

So we must answer the question: on what basis are based Western aggressive actions, threatening the national security of Russia, other than own imperialist ambitions towards it, camouflaged by lies on Russia and President Putin aggressive the Western media have massively watered the public? And that’s a very disturbing base, and even concern regarding essentially the type ofleadership dictatorship of the West, rather than any other dictatorship outside it.

The aggression and the threat here, clearly come from the West against the East.

Last January, Russian President Vladimir Putin has again challenged US President Barack Obama on his huge lie that the anti-missile weapons, as America moved to Europe, are used to protect it against Iranian nuclear missiles . Now that the United States recognizes that Iran has not, and will not have nuclear missiles, Obama intensifies these same facilities in Europe instead of terminating, close to the borders of Russia. The only real reason for their presence, as Putin maintains, is to allow a sudden nuclear attack first strike against Russia to disable its retaliatory capabilities in minutes.

The only rational response to Western audiences, to what Obama and his foreign allies instigate, is to understand what is really going on, and to take action against their own leaders before the challenges of increasingly high of the confrontation from becoming catastrophic. In this case, the populations of the countries that make up the political West must defend themselves against their own national leaders. This is a situation frequently encountered in dictatorships.

However, the main questions are not asked in the Western press, which ignores. Unless these issues are addressed publicly – and quickly – the answer could well be definitive for millions of civilians in Europe and elsewhere.

The more the situation is approaching a nuclear war more difficult it will be for both sides to retreat – and this is especially the case with the aggressor, especially when it falsely claims that he himself is attacked.

That is why the lies peddled by the Western political leaders must be exposed in an emergency.

Original article appeared in Off Guardian