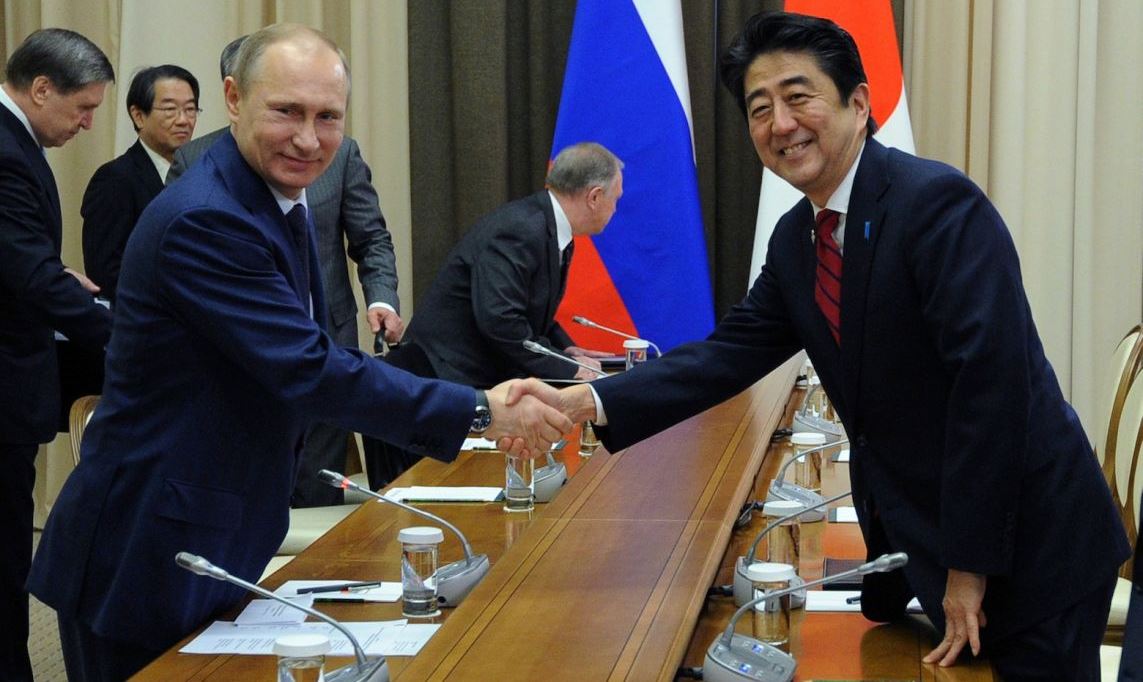 The leaders discussed the ways to bolster bilateral ties and resolve the decades-long territorial dispute over the Kuril Islands. Ukraine, North Korea, Syria, international terrorism and bilateral cooperation were also included in the agenda. The parties decided to renew the regular meetings in the 2+2 format at the level of defense and foreign ministers. An agreement was achieved to continue contacts between the two countries’ security councils. Russia also supported Japan’s involvement in the task force on humanitarian issues in Syria. Japan was invited to take part in anti-smuggling exercise in the Pacific in July-August this year.

Many things were discussed confidentially behind closed doors.

As expected, there were no breakthroughs on the territorial dispute and peace treaty, though the parties said the discussions were constructive.

The issue of disputed islands is too hard to be solved in one fell swoop. It requires patience and agility. The Russian military watched the talks closely as it is considering different plans to bolster the area defense. It still has to make precise which island will host long-range anti-aircraft and anti-ship missiles. The leaders of Russia and Japan agreed to negotiate the controversial issue in June at the level of deputy foreign ministers.

In 2013, Abe was the first Japanese leader to make an official visit to Russia in a decade, seeking to resolve differences and expand cooperation. This is the 9th meeting of the two leaders since 2012 (when Mr Abe was reelected as PM) and the 13th time the leaders meet, including the meeting held during Mr Abe’s first tenure (2006 to 2007). Two factors make the event especially symbolic. First, the 40th G8 (now G7) summit was to be held in Sochi in June 2014. It was moved to Brussels after Crimea became part of Russia. Second, this is the second time the PM goes to Sochi. Unlike other Western leaders, including G8 members, he went to see the Sochi Winter Olympic Games at the time of Ukraine’s crisis to prove he was a skillful and farsighted diplomat.

The development of relations with Russia makes Japanese foreign policy more balanced and paves the way for participation in lucrative economic projects.

It must be emphasized that the importance of the May 6 Russia-Japan summit in Sochi goes much farther than the bilateral ties. It is the main event in the recent relationship between Russia and G7. The visit took place before the G7 summit slated for late May. Russia was the final stop of the PM’s foreign trip to include France, Italy, Belgium, Germany and Great Britain. The 42nd G7 summit will be held on 26–27 May 2016 at the Shima Kanko Hotel in Kashiko Island, Shima, Mie Prefecture, Japan. Japanese PM wanted the Japan-Russia summit to precede the event as Russian President Vladimir Putin had sent a signal to Tokyo saying «The development of multi-planned dialogue with Japan is one of our foreign policy priorities. I’m counting on the planned visit of [Prime Minister] Shinzo Abe on May 6 to provide for the expansion of Russian-Japanese relations on the basis of mutual benefits and taking into account the interests of each other».

Shinzo Abe is the first leader of G7 group to visit Russia since March 2015 when President Putin met Italian PM Matteo Renzi. Unlike English speaking countries, Western leaders start to gradually intensify the contacts with Russia. German ministers are frequent visitors in Moscow. Last summer President Putin was invited to visit Expo-2015 in Milan. He used this opportunity to meet Pope Francis and pay a visit to ex-PM Berlusconi. Abe’s trip will be followed by Italian Prime Minister Matteo Renzi’s visit next month to a showcase annual investment forum in Putin’s home city of St. Petersburg.

This time, Mr Abe, America’s key ally in the Asia-Pacific, «stood tall and did it his way». He has rejected President Barack Obama’s request not to visit Russia, Kyodo reported Feb. 24.

In an interview with RIA-Novosti before the meeting Russian Foreign Minister Sergey Lavrov said, Americans were secretly telling others, including the Japanese PM, not to visit Russia.

A year ago, on the eve of celebrations devoted to the 70th anniversary of victory in WWII, the tactics worked. Shinzo Abe skipped the visit to Moscow. This time the importance of developing relations with Russia outweighed other reasons. Japan really needs the dialogue and Russia is ready to meet it half way. Both leaders have met three times during the recent two years. Abe was more than willing to meet Putin in New York at the UN General Assembly’s session last year.

A foreign policy success is important for the Japanese leader. The opposition has a good chance at the elections this autumn as the economy is stagnating. Moscow is important for balancing the relations between Japan and China. Besides, it has become harder for Washington to exert pressure on Tokyo as it cooperates with Moscow on Syria and openly says this cooperation is of great importance. But US pressure is still strong enough to make Japan postpone Putin’s visit to Tokyo initially agreed on in 2014. When it comes to setting the date, Tokyo behaves like the cat that loves fish but hates water. Japanese Prime Minister Shinzo Abe confirmed again his invitation to President Vladimir Putin to visit Japan without announcement of the date. The President and the Premier discussed the details of this invitation.

In his turn, Vladimir Putin invited Shinzo Abe to join the 2nd Eastern Economic Forum that will be held in Vladivostok on September 2 and September 3.

The visit has finally put an end to US attempts to keep Russia isolated from G7. Its warnings have been ignored in favor of keeping the dialogue with Russia invigorated. The event testifies to the fact that the contacts between Russia and the leading world powers are on the rise and have good prospects for the future.