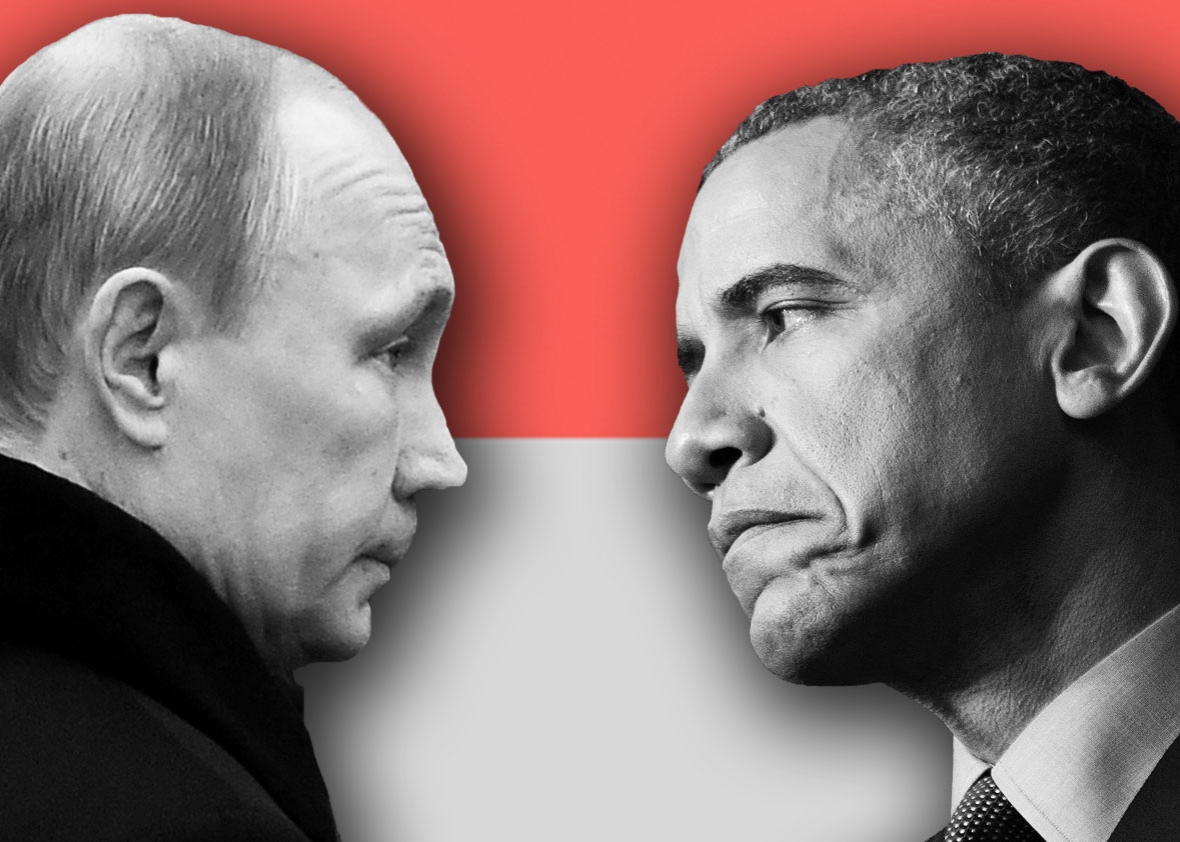 An American missile defense system was activated with great fanfare in Romania on Thursday, and Russian officials instantly denounced it as a provocation that might trigger a nuclear arms race and possibly war.

Is Moscow’s protest mere bluster and nonsense? Mainly yes, but a little bit no. The Russians are being paranoid in typically Russian fashion; but, as has often been the case, there’s some logic to their madness.

You may be surprised (I was) that we’re putting antimissile missiles on Eastern European soil. Wasn’t that President George W. Bush’s idea, and didn’t President Obama scotch the plan during his first year in office, deciding instead to put the interceptors out to sea, on the U.S. Navy’s Aegis cruisers? Obama did this for two reasons. First, ships are mobile, so the missiles would be less vulnerable to a pre-emptive attack. Second, Russians had expressed fears that the missiles were aimed at them, and this was the era of the “reset” in Russian-American relations. (Bush diddesign the program to intercept Russian

intercontinental ballistic missiles; Obama reoriented it, with different interceptors, to go after short-range missiles launched at Europe by Iran or rogue powers.)

However (and, I admit, I’d forgotten this, too), Obama’s plan did call for eventually placing these interceptors—24 of them—on Romanian soil by 2015 (so we’re running a year late) and another 24 in Poland by 2020. This decision was the product of a compromise. Some officials in Eastern Europe, who had recently joined NATO, wanted above all a firm symbol of American commitment to their defense. A ship can sail away; a missile base, on land, with officers, infrastructure, launch sites, and all the rest—that was tangible.

But this tangible symbol is, in part, what irritates the Russians. Losing the Warsaw Pact was bad enough (Vladimir Putin famously called it the greatest geopolitical catastrophe of the 20th century); seeing America carve out a military foothold in this lost territory would deepen the humiliation—and, within that mindset, would constitute a grave threat. That was the fear: A dozen or two antimissile missiles would be just the beginning of America solidifying its control of Eastern Europe, right up to Russia’s border.

U.S. and NATO officials have long insisted that this view is overblown. The Standard Missile 3, or SM-3 as it’s called, is purely defensive; it works not by blowing up a missile in midair but by slamming into it with great force; in other words, it couldn’t be turned into an offensive weapon, even if some future Western leader wanted it to be.

But from Russia’s point of view, that’s not the issue. As one military adage has it, the only purely defensive weapon is a foxhole, and a battery of antimissile missiles doesn’t change this fact. In the odd world of nuclear strategy, a nation deters an attack by posing a credible threat of “retaliation in kind.” Side A attacks Side B; Side B strikes back against Side A; therefore, Side A doesn’t attack in the first place. But imagine that Side A has an effective missile-defense system. Side A attacks Side B; Side B strikes back, but most of its missiles get shot down before reaching their targets; therefore, Side B is unable to “retaliate in kind.” Both sides do the calculation and understand the strategic imbalance, and therefore (so goes the theory), Side A dominates Side B—intimidates it into doing certain things in A’s favor—without having to go to war.

This is why Russian officials see missile defense systems as a threat. It’s a concept they learned from the Americans. In the 1950s and early ’60s, many American nuclear strategists, notably Herman Kahn, author of the best-seller On Thermonuclear War, advocated anti-ballistic-missile systems as an explicit adjunct to an offensive first-strike strategy: The U.S. launches a nuclear attack on the USSR; the USSR strikes back with the few nuclear missiles that survived the first strike; the U.S. shoots them down with its antimissile missiles. Or, more to the point, the U.S. has the capability to do these things—which puts the U.S. in a dominant position in international confrontations.

In the mid-1960s, when Secretary of Defense Robert McNamara proposed a treaty banning anti-ballistic missiles in the United States and Soviet Union, some Russian officials were puzzled: Why ban defensive weapons, they asked? McNamara schooled them on nuclear strategy; he essentially wanted to avoid the destabilizing situation that Herman Kahn wanted to foster and exploit. The Russians learned the lesson. (Richard Nixon and Leonid Brezhnev signed the ABM Treaty in 1972; George W. Bush abrogated it in 2001. At the time, the post–Cold War Russian Federation was too weak, economically and militarily, to do much in protest.)

Bush’s missile defense program was designed to protect the United States from an attack by (mainly Russian) ICBMs. The antimissile missiles, called Ground-Based Interceptors, or GBIs, were massive, almost as large as ICBMs, and they were to be encased in underground concrete silos: Some of them would be (and are) based in Alaska; some would be installed in Europe, to shoot down ICBMs shortly after they were launched. Seeing this as a threat to Russia’s deterrent, then-President Dmitry Medvedev announced he would deploy his own short-range nuclear missiles in Kaliningrad. Obama canceled the European part of Bush’s program, refocused it to deal with a possible Iranian attack against Europe, replaced the large GBIs with much smaller and slower SM-3s, and said he’d put them on ships, not on Eastern European soil—as a result of which Medvedev canceled his Kaliningrad plan.

Now that U.S. interceptors are being placed on Eastern European soil after all (as envisioned, but not loudly announced, in Obama’s plan), it’s no surprise—especially with Putin in power and the era of “reset” long evaporated—that Russian is responding with renewed threats to deploy missiles to Kaliningrad and more.

U.S. and NATO officials are once again offering reassurances. A couple dozen interceptors, they correctly say, aren’t nearly enough to undercut Russia’s deterrent force. In any case, the SM-3s are much too slow to cope with Russian ICBMs; and their location, about 100 miles southwest of Bucharest, Romania, is too far away to stop Russian short-range missiles. These officials have offered to share all technical data with the Russians; in fact, they’ve offered to give Russian officers access to the missile defense radar station—to let them use it to help protect their own country from a missile attack. But so far the Russians have ignored the offers.

The entire spectacle is theater, and little more. The fact is, it’s unclear whether the SM-3 interceptors would even work. They have a mixed record of shooting down ballistic missiles in carefully controlled tests; results would likely be spottier still in real life, where a missile strike’s timing and trajectory are unknown ahead of time, especially if the enemy (whoever that might be) fires more than one missile at a target (a scenario that has never been tested).

We put some missile defense rockets on Eastern European soil, as a tangible token of our commitment to the defense of NATO’s newest members. The Russians haul out their fiercest rhetorical assaults, in (quite possibly genuine) fear of American “encirclement” and the permanent loss of their own imperial holdings. It might be entertaining theater, like the apes waving their bones and beating their chests in the first part of 2001: A Space Odyssey. But the missiles are real, the tensions are growing, and despite dramatic reductions brought on by four decades of arms-control treaties, both sides still have thousands of nuclear weapons in their active stockpiles.

Cold War redux is a dangerous phenomenon. At least in the original version, the United States and the Soviet Union controlled vast chunks of their hemispheres. That’s no longer the case. Power centers have collapsed, alliances have frayed, national borders are weakening in the world’s most unstable regions, and millenarian militias are vying with states for the loyalty of disenfranchised sects. It’s a time for traditional powers to work through their real differences, build collective defenses in the pursuit of common interests, and put away Cold War fantasies.