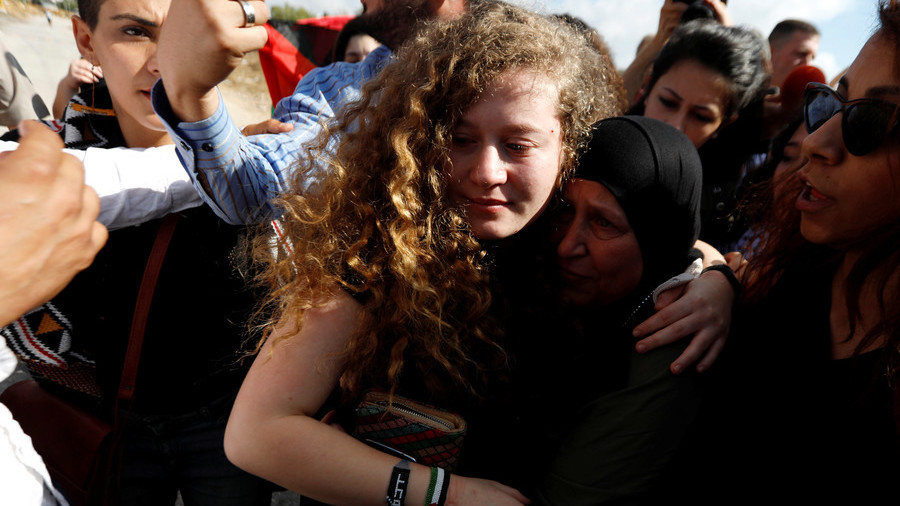 Ahed Tamimi, the 17-year-old Palestinian who slapped an Israeli soldier in her home village, has been released from prison. The girl, praised by many as a symbol of the Palestinian resistance, has returned to the West Bank.

The Palestinian teenager and her mother left prison on Sunday after completing an eight-month sentence for slapping and kicking Israeli soldiers. Tamimi’s family arrived at a checkpoint in the West Bank, where they spoke briefly to reporters before heading to their home village of Nebi Saleh.

“From this martyr’s house, I say: Resistance is continuing until the occupation is removed,” she said as cited by Reuters. “All the female prisoners in jail are strong, and I thank everyone who stood by me while I was in prison.”

Speaking to the media later in the day, newly freed Tamimi reiterated her call for Palestinians to keep resisting and remain strong. She also spoke about the suffering of political prisoners in Israel, revealing the hardship she had suffered, including often being transported inside a military vehicle made entirely of iron on the inside. She also spoke about how difficult it was to prepare for exams while in jail.

Tamimi was arrested last December after a video of the incident with Israeli troops, filmed by her mother, went viral. She faced 12 charges, including assault and incitement. Since her arrest, a number of her family members have also been detained.

In April, the teenager’s lawyer Gaby Lasky filed a complaint over alleged “inappropriate conduct,” which amounted to sexual harassment during her detention. The claim came after a video of the Tamimi’s interrogation emerged online. The footage allegedly showed an Israeli central military intelligence officer commenting on the young girl’s appearance and attractiveness. The interrogator also threatened to arrest other members of her family if she did not cooperate, according to the lawyer.

On the eve on the Tamimis’ release, Israeli police arrested Italian graffiti artist Agostino Chirwin, who had depicted the teen in a mural on a West Bank separation wall in Bethlehem. Another Italian artist and a Palestinian, whose identities were not released, were reportedly also detained with Chirwin.