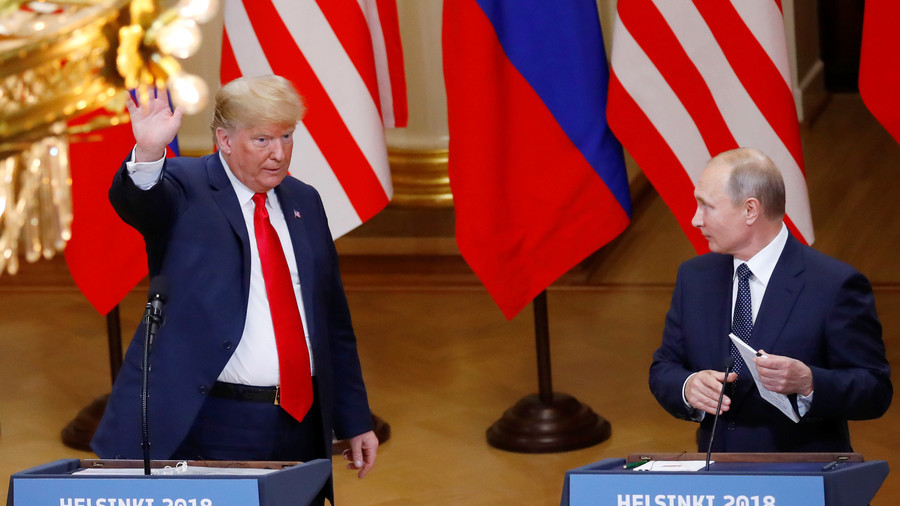 Russian President Vladimir Putin described as ‘absurd’ any talk of collusion between Moscow and US President Donald Trump during the 2016 election campaign in the US.

“We need to rely on facts, not on momentary political interests of political factions in our countries,” Putin said at the press conference following a meeting with Trump in Helsinki on Monday. “Tell me one fact that shows some kind of collusion during the campaign in the US. It’s completely absurd. We didn’t know each other, just as [President Trump] said.”

“There was no collusion at all. Everybody knows it,” Trump said, answering a question from Reuters. “I didn’t know the president. There was nobody to collude with.”

Putin noted that it was perfectly normal for the Russian public to develop a preference during the US presidential election.

“Candidate Trump was talking about the need to re-establish relations with Russia. That led to an opinion among the Russian people that he was the preferable candidate. That’s natural,” Putin said.

Despite the assurances from both leaders, journalists persistently asked questions about the collusion.

Trump was pressured over his blaming of the Mueller probe and US stupidity for bad relations between Moscow and Washington, and whether he is holding Russia accountable.

“I think we’re all to blame… I do feel we have both made some mistakes,” he replied.

On the topic of the Mueller probe into alleged collusion between the Trump campaign and Moscow, both leaders seemed to suggest that claims made by the American intelligence community required further scrutiny.

Trump called the investigation a “disaster for our country” that has had “a negative impact upon the relationship of the two largest nuclear powers in the world.” He went on to raise questions about the thoroughness of the probe.

“We have groups that are wondering why the FBI never took the [DNC] server. Why was the FBI told the leave the office of DNC. I’ve been tweeting it out. ‘Where is the server?’”

Putin also raised doubts about the veracity of some of the reports emerging from US intelligence agencies, saying that as a former intelligence offer he understood “how these dossiers are made.” The Russian leader suggested that instead of leaving such an important and contentious issue to intelligence agencies, all claims of collusion should be “resolved by the courts.”

“Here’s what I propose. We do have an existing treaty signed in 1999 on mutual aid in criminal investigations,” the Russian president said. “So Mueller could send us an official request, so our prosecutors can look into it, we can question those individuals, and send those materials to the US. We can also invite US official representatives, including members of the Mueller probe, to be present during the questioning.”

He said that Moscow was ready to receive such a request, on the condition that Washington would provide similar assistance with an investigation into Bill Browder, an American investor accused of tax-dodging in Russia. Browder renounced his US citizenship in order to avoid paying taxes, and now holds a British passport.