Home » Economy » ‘Appreciate your allies, you don’t have many’ – EU Council President Tusk to Trump 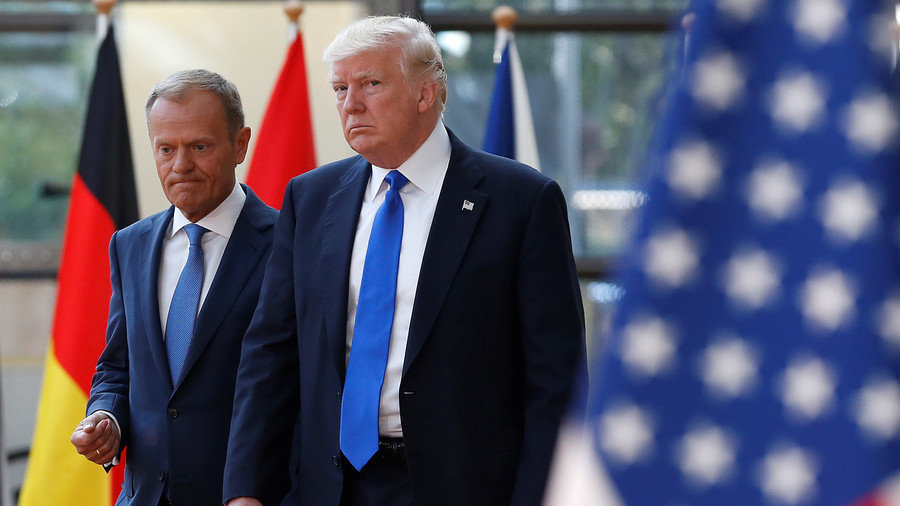 ‘Appreciate your allies, you don’t have many’ – EU Council President Tusk to Trump

European Council President Donald Tusk called on Donald Trump to be more respectful towards America’s allies ahead of a NATO summit, arguing that they are now in short supply.

“Dear America, appreciate your allies, after all you don’t have that many,” Tusk said after signing a statement on cooperation between the EU and NATO.

The declaration was signed ahead of a two-day meeting of NATO members in Brussels starting Wednesday, in which Tusk and Jean-Claude Juncker, the president of the European Commission, will represent the European Union.

Trump brushed aside Tusk’s criticism as he was leaving the US for a trip to Europe, which will include a NATO summit, a visit to the UK and his first dedicated bilateral meeting with Russia’s Vladimir Putin: “We do have a lot of allies, but we cannot be taken advantage of.”

The US leader has been repeatedly voicing his unease about NATO partners. He once branded the bloc a vehicle used by European allies to abuse America’s generosity and gain military protection while failing to pull their weight financially. The rhetoric sparked fears in Europe that the US may announce the downgrading of its military presence on the continent during this week’s meeting.

The abrasive personal style and US-centered policies of the US president put long-established ties between America and its closest allies under strain. Critics say Trump undermined US global leadership less than half-way through his first term.

The Europeans are disgruntled about Trump not only because of his lecturing over defense spending and questioning US commitments to NATO allies. He also started a trade war with EU members, accusing them of exploiting free trade with the US. The tariffs and counter-tariffs with the Europeans are only part of a larger conflict the US is currently waging against many countries, including its primary trade partner China.

Some European nations, including heavyweight Germany, have been targeted by the Trump administration for energy trade with Russia. Washington threatened European companies involved in the Nord Stream 2 gas pipeline project with sanctions. In Germany the threat is perceived as an attempt to push the expensive liquefied natural gas produced by the US to the European market.

Threats of sanctions are also used by the US to push Europeans away from Iran after Trump withdrew America from a key multilateral deal with Tehran over its nuclear program. Negotiated under Barack Obama, the 2015 deal offered Iran the lifting of economic sanctions and new business opportunities in Europe in exchange for placing significant restrictions and a transparency mechanism on its nuclear industry. The withdrawal came against vocal criticism from other participants of the agreement, including Russia, China and the EU.