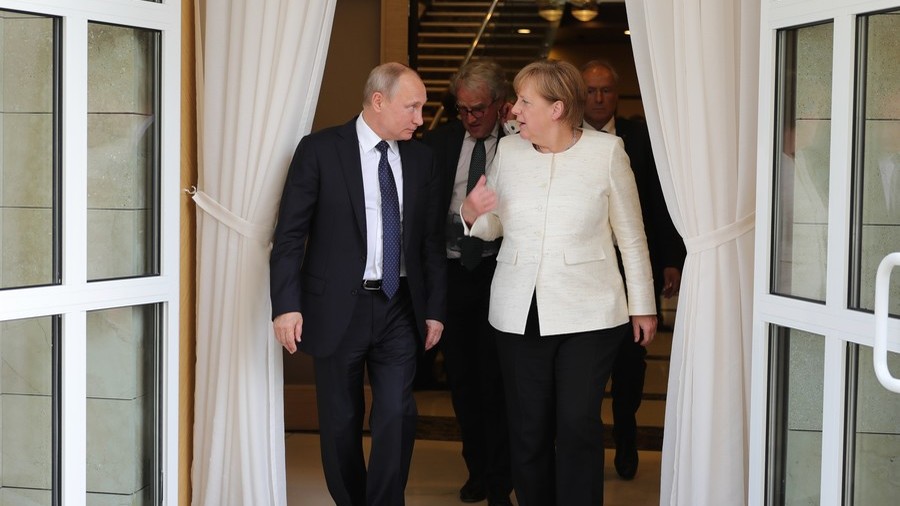 Sanctions imposed by the Trump administration that could hurt companies in Germany and Russia were among the issues discussed by President Vladimir Putin and Chancellor Angela Merkel during their latest meeting.

Merkel arrived in the Russian Black Sea city of Sochi to meet Putin on Friday, around a year after her previous visit in 2017. Both leaders have had their mandates reconfirmed by their respective electorate since – Putin during the March election, which he won in a landslide, and Merkel after winning the September 2017 general election in Germany and, arguably more impressive, securing a coalition agreement after a daunting six months of negotiations.

The way Putin greeted Merkel may have reminded her of the coalition talks. After the agreement was finalized and she was finally elected chancellor by the parliament in mid-March, Merkel received flowers from fellow members of the coalition. Similarly, the Russian president also handed his guest a bouquet when meeting her on the porch of his residence in Sochi, before having a three-way chat with Prime Minister Dmitry Medvedev, whose cabinet reshuffle has just been completed.

While the two leaders had plenty of issues to discuss, from humanitarian aid and the political transition in Syria, to the crackdown on a Russia-linked news agency in Ukraine, the latest actions by the US were among the top priorities. President Donald Trump’s decision to break a nuclear deal with Iran by re-imposing economic sanctions poses a potential threat to European companies doing business in Iran.