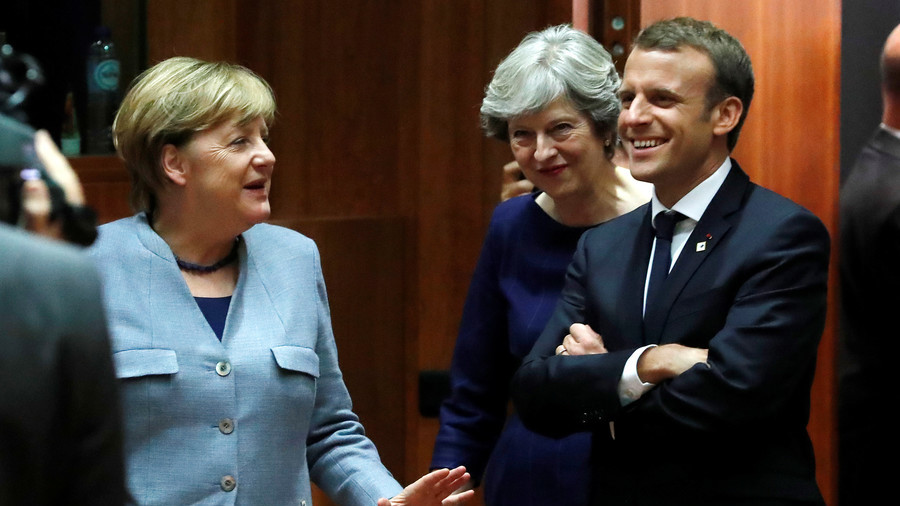 UK, France & Germany unite to defend Iran deal amid US threats to ‘fix or leave’

The leaders of the UK, France and Germany have agreed to defend the Iran nuclear deal while they work out a way to wring more concessions out of Tehran. The 2015 deal is “the best way” to keep Iran from nuclear weapons, they said.

The renewed push for the deal to stay intact came during separate phone calls between UK Prime Minister Theresa May and French President Emmanuel Macron, and May and German Chancellor Angela Merkel on Sunday. The leaders of the countries, which are all party to the landmark 2015 agreement, agreed that it was “the best way of neutralizing the threat of a nuclear-armed Iran,” the statement issued by Downing Street says.

At the same time, as Washington demands the deal be “fixed”, the three will be working on forcing Iran to abandon more than just its nuclear development. They acknowledged “the importance of retaining the JCPOA [Joint Comprehensive Plan of Action, the official name of the deal], they committed to continue working closely together and with the US on how to tackle the range of challenges that Iran poses,” the statement said.

These “challenges,” including Tehran’s ballistic missile program and its growing role in the Middle East, might be alleviated by a new deal. The new agreement, one that will also set the framework for the post-2025 period, when the existing deal expires (provided it survives past the next fortnight), was touted by Macron during his state visit to the US.

However, both Macron and Merkel pandered to US President Donald Trump during their back-to-back visits, both agreeing that they want a new constraining deal imposed on Iran, they apparently failed to convince the US president to keep the old one intact for now.

Trump’s State Secretary Mike Pompeo, whose hawkish stance on Iran arguably won him the job, called the embattled agreement “very flawed” during the Israeli leg of his flash inaugural Middle East tour, making it clear that his boss remains hell-bent on pulling out of the agreement if it is not “fixed” by the May 12 deadline.