Home » Culture and history » More than 1,000 ancient Egyptian artifacts and coffins found in tomb near Luxor 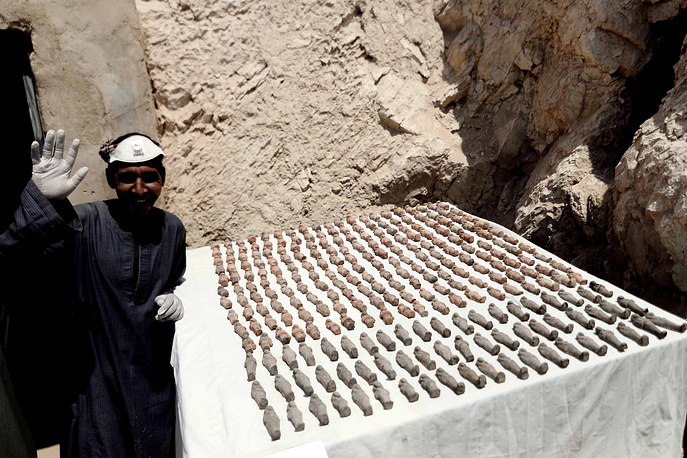 More than 1,000 ancient Egyptian artifacts and coffins found in tomb near Luxor

Archaeologists have discovered several sarcophagi and more than 1,000 various artifacts dating back to ancient Egyptian times near the country’s southern city of Luxor, Antiquities Minister Khaled al-Anani announced on Tuesday, when the World Heritage Day is being celebrated.

The minister said that the discovery had been made in the Dra’ Abu el-Naga’ mountainous terrain near the famed Valley of the Kings. Egyptian archaeologists unearthed a tomb which must have belonged to a high-ranking nobleman – a judge named Ou Sarhat – who lived in the times of the 18th Pharaonic Dynasty (1550-1292 BC). The archeologists recovered six sarcophagi containing mummies and 1,050 artifacts, including funeral masks, dozens of ceramic items and several hundreds of ritual figurines called ushabti.

The Egyptian antiquities minister noted that most of the items were in very good condition. “Some colors are so bright that one might think these things have been painted only a few days ago,” al-Anani added.

The unearthed tomb consists of a main hall and two cells that archeologists have just started to explore. According to Mostafa Waziry, Director General of Luxor Antiquities, though the Ou Sarhat tomb is unique, even more amazing discoveries can be made when further exploring the tomb’s cells.