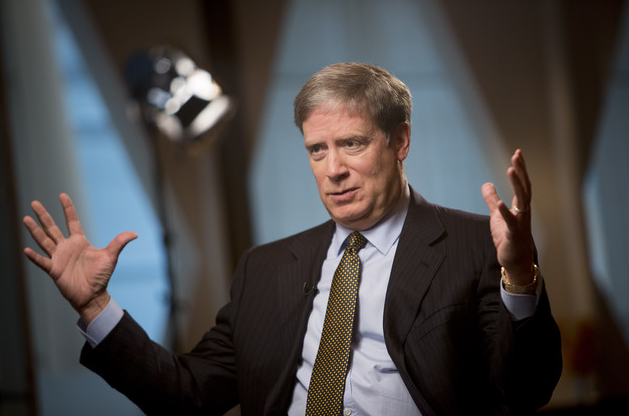 Billionaire investor Stanley Druckenmiller told CNBC on Thursday he’s “quite, quite optimistic” about the U.S. economy following the election of Donald Trump.

“I sold all my gold on the night of the election,” the founder and former chairman of Duquesne Capital said in a “Squawk Box” interview.

He said he’s betting on growth by shorting bonds globally and he likes stocks that respond to growth. He also likes prospects for the dollar, especially against the euro.

This rosier outlook is in sharp contrast to what Druckenmiller said at the Sohn Investment Conference in New York in May. At the time, he told attendees they should sell their stock holdings. He also had said gold was his “largest currency allocation.”

Despite Druckenmiller’s past negativity, he said Thursday: “It’s as hopeful as I’ve been in a long time.” He added, “I would not be surprised if we’re not looking at the peak of the divisiveness.”

“[But] I hope economic policy is deferred to Mike Pence and Paul Ryan,” he said, referring to the vice president-elect and the speaker of the House. He pointed out he did not support Trump or Hillary Clinton. (Druckenmiller had supported John Kasich for the Republican nomination and said he’s philosophically in favor of Ryan’s economic policies.)

“I don’t think Donald Trump is Ronald Reagan,” he added.

Since Republicans maintained control of the House and Senate while winning the White House, Druckenmiller said “this is the greatest chance” to get tax reform and deregulation passed.

“If it wasn’t for the messy conflict of rates rising with the stronger economic growth through [fiscal] policy, I would think there’s so much low-hanging fruit in terms of deregulation and tax reform, we could get a jolt of 4 percent [growth] for about 18 months,” he said.

The Fed meets next month, and central bankers are widely expected to hike rates for the second time in a decade. The last rate increase was in December 2015.

Druckenmiller said if he were Trump, he would not replace Federal Reserve Chair Janet Yellen before her four-term is up in 2018. Trump has indicated he would not look to reappoint Yellen, accusing her during the campaign of being motivated by politics.