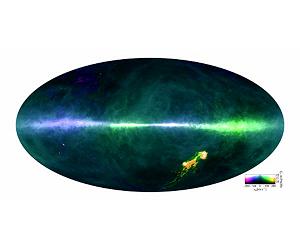 Hydrogen. Atomic number 1. It is the simplest and lightest element on the periodic table, but don’t be fooled by its humble appearance. With just a single proton and a single electron it is the most abundant element in the universe and has fueled star formation for the past 13 billion years.

Now scientists – including an astrophysicist from West Virginia University – have mapped the key ingredient’s distribution across the Milky Way revealing details about our galaxy that have never been seen before.

The new map is the result of work by a team of scientists from around the world, including D.J. Pisano, associate professor of physics and astronomy in the Eberly College of Arts and Sciences. The research was published in the journal Astronomy and Astrophysics.

The HI4PI survey collected data on clouds of hydrogen gas at full resolution, allowing scientists to learn more about the physics of what is going on in those areas, where the structures are coming from and more.

Pronounced “hi four pie,” referring to the astrophysical abbreviation for neutral hydrogen (HI) and the geometrical reference to the whole sky (4*PI), the survey allows scientists to study all directions of the sky.

Due to their sheer size and other technical characteristics these scientific instruments are highly sensitive. They can see deep into space, allowing scientists to study parts of the universe that are often invisible or hidden.

The team used the two telescopes to survey from both the northern and southern hemispheres. Because scientists collected the data from two different telescopes, astronomers in Germany did additional data processing to produce a combined, consistent map.

“The scope of the survey – the entire sky – couldn’t have been done without collaboration with scientists from around the world,” said Pisano.

The study required more than a million individual observations and about 10 billion individual data points. Pisano and his collaborators in the galactic All Sky Survey in Australia spent more than 2,000 hours over two years using the Parkes telescope to map the sky south of the equator.

The previous survey, the Leiden-Argentine-Bonn or LAB, used a smaller telescope and was published 11 years ago. The new study uses modern technology with twice the sensitivity and four times the resolution, revealing a variety of structures – both large and small – that had never been seen before.

Imagine the difference between a blurry or pixelated photograph versus a high resolution, detailed picture.

“The result of this research is a much more comprehensive map of our galaxy that will allow scientists to better understand the Milky Way and our galactic neighbors,” said Pisano. “This is a landmark for the field of astrophysics that will bring new insights for decades to come.”

Pisano’s research interests focus on how galaxies form and evolve. He says one of the things that HI4PI shows is how the cold gas in the halo at the edge of the Milky Way interacts with hot gas. He also said that the new survey helps fill in gaps from the previous survey for a more complete and accurate map.

HI4PI data is available to scientists through the Strasbourg astronomical data centre.