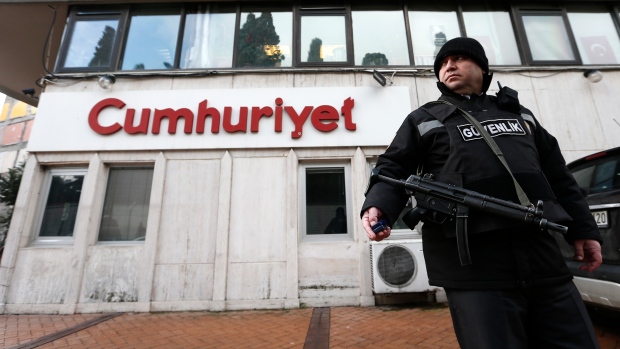 Turkish police today detained the editor-in-chief of the opposition secularist Cumhuriyet newspaper and said homes of the paper’s executives and writers were being searched, broadcaster CNN Turk and other media reported.

Prosecutors have issued detention warrants for a total of 13 executives and writers at the newspaper including editor Murat Sabuncu and the paper’s chairman, CNN Turk said, adding that one of its writers had been detained in the capital Ankara.

The pro-government Yeni Safak newspaper said on its website they were being investigated over alleged links to U.S.-based cleric Fethullah Gulen, accused by Ankara of orchestrating a failed coup in July, as well as links to Kurdish militants.

The police operation comes after Turkey at the weekend dismissed a further 10,000 civil servants and closed 15 more media outlets over suspected links with militant groups and Gulen.

More than 100,000 people had already been sacked or suspended and 37,000 arrested since the abortive putsch in an unprecedented crackdown that Erdogan says is crucial to wipe out Gulen’s network from the state apparatus.