Home » Manchet 3 » What would 100 days of a Clinton White House look like? 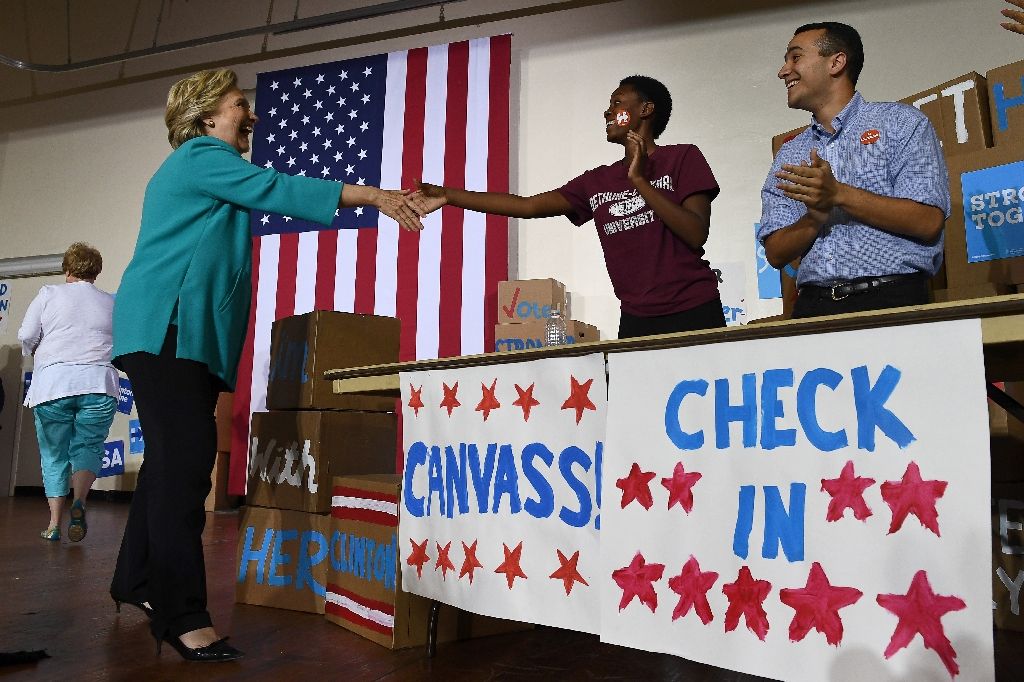 What would 100 days of a Clinton White House look like?

On January 20, 2017, Barack Obama’s successor will take the oath of office on the Capitol steps in Washington for a four-year term. As always, the first 100 days for any American president are paramount.

Democrat Hillary Clinton has released a detailed policy platform, but a successful start for an eventual Clinton administration depends on a number of variables — notably who is in control of Congress.

“We’ll begin to get to work right away and reach out to everybody that we can possibly touch to start talking about what we can do together,” Clinton said on October 22, recalling her efforts to work with Republicans as a first lady and senator.

“And I think there’s a big agenda where we can find common ground.”

Clinton has pledged to put forth two bills in her first 100 days in office: one on immigration reform and the other a major infrastructure investment plan.

These two major legislative initiatives should dominate the start of the 69-year-old’s mandate. In the past, they have been issues that have earned bipartisan support.

To fulfill her campaign pledge to offer a pathway to “full and equal citizenship” to millions of immigrants without legal residency, Clinton will need to make compromises with Congress — and thus with Republicans.

Republicans are likely to maintain control of at least the House of Representatives and possibly the Senate as well.

The Senate adopted immigration reform legislation in 2013, but it died in the House, due to pressure from the Republican Party’s ultra-conservative wing.

Current House Speaker Paul Ryan is open to some kind of immigration reform, but one that unfolds in stages: first, a toughening of border controls, followed by an overhaul of the legal immigration system and, eventually, some form of a way forward for undocumented migrants.

“It’s going to be difficult for Republicans to do nothing and continue to be obstructionist,” said Carmel Martin, executive vice president for policy at the Center for American Progress, a think tank that is close to Clinton.

According to Doris Meissner, an expert at the Migration Policy Institute, “it does come down to what the struggle within the Republican Party will be, on how they interpret the election result if they in fact lose the presidency.”

Another major decision awaits the next president: the eventual nomination of a Supreme Court justice to replace the late Antonin Scalia, a stalwart conservative.

Obama nominated Merrick Garland, but his candidacy has stalled in the Senate amid partisan stonewalling. If the Democrats win a majority in the chamber, that could change quickly.

– What to do about Syria and Putin

Foreign policy headaches will pile up on the desk of Obama’s successor, but none are as big as the crisis in war-wracked Syria.

Clinton should quickly set up her national security team, and is likely to pull at least some of her picks from the ranks of Team Obama.

Some posts, like secretary of state and Pentagon chief, require Senate approval.

A review of American policy in Syria is “inevitable,” according to Jeffrey Rathke, a senior fellow at the Center for Strategic and International Studies in Washington.

Rathke, an expert on Europe, also said it would be “necessary” to review US policy towards the Old Continent, and towards Russia, in order to reinforce US ties with both the European Union and NATO.

“It’s important for the new administration to take a leadership role in ensuring that not only do we support a country that’s under pressure from Russia, but to be sure that we are prepared to react if there are further attempts by Russia to intimidate or coerce European countries,” Rathke told AFP.

A European ambassador in Washington said it would be vital for the next president to organize a US-EU summit as quickly as possible.

A NATO summit is set to take place in Brussels next year, but a specific date is not set.

A Group of Seven summit is on the cards for May 2017 in Italy, as well as a G20 summit in July in Germany.

The next US leader also may want to consider attending the annual Munich Security Conference in February, less than a month after taking office.

As for a first presidential trip abroad, Clinton’s entourage declined comment to AFP as to whether she would respect the tradition followed by the last five presidents, who headed first to either Canada or Mexico, America’s neighbors.