Home » News » Assad thanks Putin for assistance in fighting terrorism 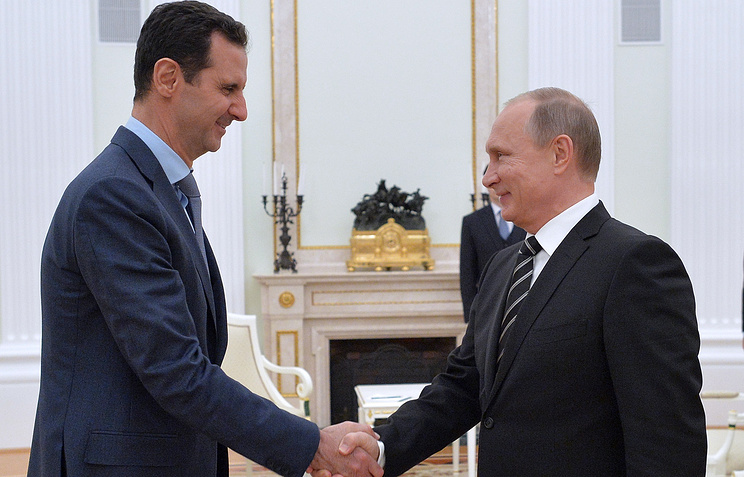 Assad thanks Putin for assistance in fighting terrorism

Syrian President Bashar al-Assad conveyed his gratitude to Russian President Vladimir Putin for his assistance in fighting terrorism, Syrian Foreign Minister Walid Muallem, who is on a visit to Moscow, stated during the talks with his Russian counterpart, Sergey Lavrov.

“President Assad has instructed me to convey gratitude on behalf of the Syrian people and government to you and President Putin for your effective assistance in the fight against terrorism,” Muallem said.

“We seek to free our land from terrorists so we highly appreciate Russian and Iranian efforts aimed at achieving this goal,” Syrian top diplomat said. “Our countries have common goals that is why we continue to coordinate our actions almost on a daily basis.”

Muallem also thanked Russian Defense Minister Sergey Shoigu for providing the opportunity to develop bilateral relations “in the context of the campaign to pursue terrorists that we have been carrying out.”

Damascus is ready to resume the ceasefire but only if there are guarantees that civilians will be able to leave the city, Walid Muallem has noted.

“Recently, we have made a decision to suspend hostilities in Aleppo. The ceasefire lasted for three days,” Muallem said. “We have banned Syrian warplanes’ flights over Aleppo and the ban is still in force.”

In the meantime, Muallem said “terrorists from Jabhat al-Nusra (outlawed in Russia) and Ahrar ash-Sham threatened civilians who were going to leave Aleppo.”

“In other words, we introduced a ceasefire for humanitarian reasons, but the civilians were unable to use it,” he said, adding Damascus was “ready to resume the ceasefire, but only with guarantees provided by terrorists’ patrons that the ceasefire will allow civilians leave the city.

Damascus is set to immediately resume the intra-Syrian talks in Geneva, Muallem stated.

“We in Syria are ready to work to find a political solution to the Syria crisis and are also set to immediately resume the intra-Syrian talks, without any external interference. Moreover, an invitation to the Geneva negotiations was dated May, 2016,” Muallem said. “However, the United States and their allies do not allow the talks to take place.”

The intra-Syrian talks were suspended in late April as they failed to reach any visible results. Deadlines for the resumption of the negotiations have been extended repeatedly.