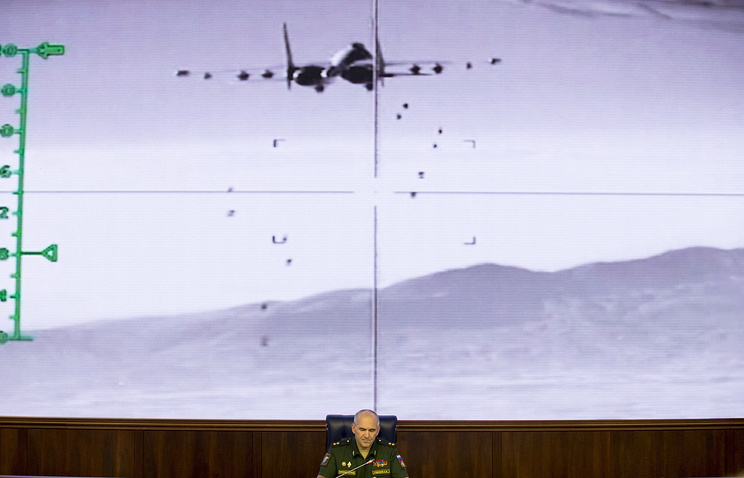 Russian warplanes are ready at any moment to deliver strikes against militants moving into Syria from Iraq, Head of the Main Operations Department at Russia’s General Staff Lieutenant-General Sergey Rudskoi said on Tuesday.

“The Russian Aerospace Force is monitoring the situation in the area of the Syrian-Iraqi border day and night with the help of unmanned aerial vehicles and other reconnaissance means. Russian planes are on patrol missions in the airspace and are ready to immediately deliver strikes against terrorists,” the general said.

According to Rudskoi, the members of the Islamic State terrorist group (outlawed in Russia) continue moving from Iraq to Syria, while around 300 terrorists have already arrived in Syria’s Deir ez-Zor from Iraq’s Mosul.

“The IS militants are leaving Iraq’s territory and entering Syria. According to our information, around 300 combatants have arrived in the city of Deir ez-Zor from Mosul,” he said.

Mosul, Iraq’s second largest city with a population of 1.3 mln, has been controlled by the IS for more than two years.

No major success in Mosul operation

The general has pointed out that the Russian military are keeping a close eye on the situation around Iraq’s Mosul but see no “major success” in liberating this city from terrorists.

“We are closely watching the situation around Mosul. So far, we see no major success in the coalition’s operation to liberate this city from Islamic State terrorists,” he said.

Over 60 civilians killed in coalition’s air strikes in Iraq

The  official noted that over 60 civilians had been killed and more than 200 have been wounded in the past three days in air strikes by the United States-led coalition in Mosul and neighboring settlements.

“We know about numerous facts of the U.S.-led coalition’s air strikes against living quarters, schools and other civil infrastructure buildings both in Mosul and in other settlements in the Iraq’s Nineveh governorate,” he said. “In the past three days alone, more than 60 civilians, including children, have fell victims of these air strikes. More than 200 people have been wounded.”

On October 23, US warplane bombed the settlements of Qaraqharab 17 kilometers north of Mosul and al-Shura 34 kilometers south of Mosul, where many social buildings were destroyed, Rudskoi said.

The ground operation to liberate Mosul from terrorists of Islamic State began on October 17. It involves the Iraqi government troops, Kurdish units and the US-led international anti-terrorist coalition. Mosul, Iraq’s second largest city with a population of 1.3 million, has been controlled by Islamic State for over two years.

Russian and Syria’s warplanes perform no flights around Syria’s city of Aleppo, and the no-fly regime will be extended.

“I would like to drew your attention to the fact that since October 18, Russian and Syrian warplanes have been performing no flights in a ten-kilometer zone around Aleppo. The moratorium on airstrikes by Russian and Syrian aviation around this city will be extended,” Rudskoi said.

Over the three days the humanitarian pauses were effective militants bombarded residential areas in the western part of Aleppo (held by the government army) 52 times, killing 14 civilians and injuring 50 others. In fifteen cases fire was opened against the humanitarian corridors, Russian military sources said.

According to Rudskoi, Russian defense ministry has refuted Euronews’ allegations about a Russian air strike at the Sahour hospital in Syria’s Aleppo.

“An image taken from space on September 24, or before the date of the alleged bombardment, features the Sahour hospital. No changes to the facility can be observed on another image taken on October 11, or after the alleged air strike. This fact proves that all accusations of indiscriminate strikes voiced by some alleged eyewitnesses turn out to be mere fakes,” he said.

On October 2, Euronews reported about an air strike on the Sahour hospital in eastern Aleppo. The television channel claimed that Russia warplanes had taken part in the air raid. According to Euronews, at least seven missiles fired from jet planes and helicopters hit the hospital, destroying its walls, infrastructure, equipment and electricity generators.

Russia is prepared to introduce humanitarian pauses in Aleppo on short notice, but only if there is reliable information the sick, the injured and civilians are ready for evacuation, Rudskoi added.

“We will be prepared to introduce humanitarian pauses on short notice, but only if there is reliable information the sick, the injured and civilians are ready for evacuation,” he said..

“The terrorists have been doing their utmost to prevent civilians and militants to leave eastern Aleppo. Humanitarian corridors that civilians might use remain blocked and all those who try to leave Aleppo come under sniper fire,” Rudskoi said.

Rudskoi recalled that UN officials had had the intention to take 200 sick and injured persons out of eastern Aleppo, but the operation failed to be agreed with the militants.

“As a result, on the first day of the humanitarian pause only eight injured militants and ten civilians got out of the eastern quarters of the city. It was a result of joint efforts by Aleppo’s authorities and the Russian center for the reconciliation of warring factions. The calls addressed to the leaders of the so-called moderate opposition and their sponsors for permitting the evacuation of the sick, the inured and civilians, as well as armed militants, have remained unanswered,” Rudskoy said.

“Despite all this we keep working to provide assistance to the local population,” he stated, adding the evacuation of 48 people had been arranged for Monday evening.