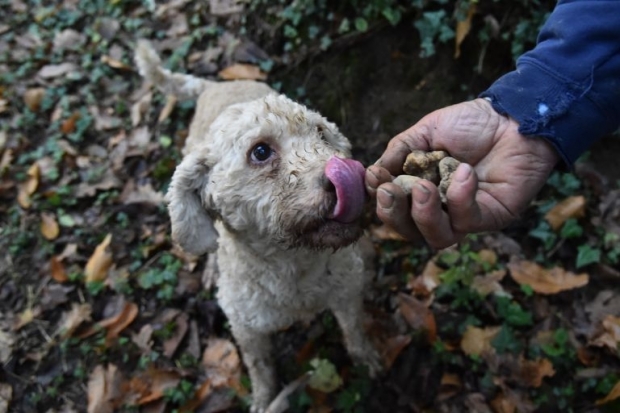 It is the early hours of the morning and Giovanni Sacchetto is explaining why chilly autumn nights find him trailing by moonlight through the woods around Alba in the Piedmont region of northern Italy.

Sacchetto, 64, and his beloved companion Dora, a sprightly Lagotto Romagnolo gundog, are on the hunt for white truffles, the hard-to-find fungi famed amongst foodies for their earthy scent, and their equally heady prices.

“A truffle is a strange thing. And it’s lovely, because it’s so strange. You never know where you might find one. Never.”

Now nine, Dora has been Sacchetto’s constant companion since she was an eager young puppy learning how to use her sensitive nose to sniff out truffles buried beneath the forest floor.

“I’m not saying it is better than a wife, but for a truffle hunter his dog is something… indescribable,” Sacchetto says with a smile.

The Romagnolo breed is known for its acute sense of smell but individual dogs still have to be trained, starting with pieces of gorgonzola, the whiffy Italian blue cheese, buried under ground, before graduating to actual truffles.

Now when Dora locates a truffle, she wags her tail excitedly over the spot where a valuable tuber awaits — usually buried between 10-30 cm (4-12 inches) below the surface.

For her it is a game — her efforts rewarded with a treat in the form of a biscuit or a little piece of dry bread.

Sacchetto was 14 when he first went truffle hunting, with his grandfather. At the time, it was about putting food on the table, he recalls.

Now it is more of a hobby, but secret spots are still jealously guarded. “I’ve been doing this for 50 years, I know all the plants, all the paths.”

At one time, truffles were more plentiful but the cutting of some trees and the effects of pollution on others has reduced the autumnal bounty, he says.

Fears the delicate ecosystem that produces the white truffles could be at risk has triggered a crowdfunding initiative aimed at raising 50,000 euros to ensure better management of the local woodlands.

Antonio Degiacomi, president of the National Centre for the Study of Truffles, says wooded areas around Alba have been neglected, with faster growing species threatening to crowd out truffle-friendly trees like oaks and lime trees.

“There is not an imminent threat but we have to be pro-active,” he says.

Helpful measures include thinning denser woodland and planting new trees but coordinating action is complicated, notably because the hunters who know where truffles are produced often do not own the land on which they forage.

Tracking down edible fungi is an Italian obsession with some 200,000 active enthusiasts nationwide, of whom 4,000 are based in Piedmont.

The country is so proud of its truffle culture that it has asked for it be enshrined on a list of humanity’s intangible heritage maintained by the UN’s culture body, UNESCO.

Alba is already well known in gastronomic circles as home to some of Italy’s most famous red wines and it has been hosting an annual white truffle fair since before World War II, drawing in thousands of gourmet pilgrims for nearly two months of tasting, buying and selling.

For Swiss enthusiast Marie-Claude, it is a price worth paying.

“Just the scent is something unique,” she said. “Personally I like it best with something really simple, just on some pasta or a risotto.”

“The thing that is very specific to the Alba truffle is the incomparable lightness of its aroma, and its elegance,” he says as he assembles a salad of seasonal vegetables speckled by ultra-fine shavings of the local delicacy.

“It is such a pure product of nature that us chefs have to be at the service of the truffle, and not the other way round.”

Harvested from September 21 until the end of January, truffles need both rain and cold to thrive, according to Sacchetto.

“The colder it is, the better the truffle,” he says, adding that no two are exactly alike.

“The truffle is like wine, each zone has its own smell and those from Alba are the most perfumed.”