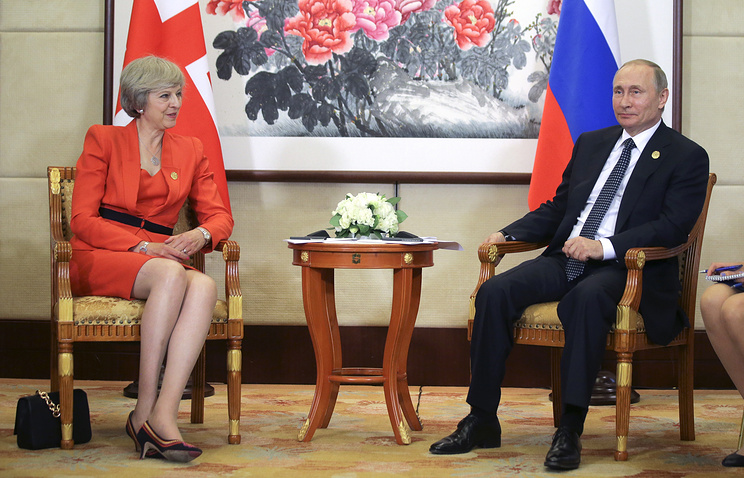 “Warming in Russian-British relations not in sight over short term”

Britain’s incumbent Prime Minister Theresa May is using Russophobia as an instrument for promulgation of her political initiatives and that is why improvements in the relations between Moscow and London are not in sight in the short term, says Kira Godovanyuk, a senior researcher at the Center for UK Studies that reports to the Moscow-based Institute of European Studies.

“Theresa May, who is marking 100 days since getting to the Office of the Prime Minister today, carried on the tough line against Russia that was conducted previously by the coalition of the Tories and the Lib Dems and then by David Cameron’s conservative cabinet,” she said.

According to Govanyuk, the current spate of Russophobia got powerful acceleration during the parliamentary election campaign last year.

“In 2015, when the campaign for election to parliament was in progress, the leading parties were trying to scare the British voters with the dangers ostensibly coming from Russia,” she said. “The pro-European section of British officialdom chose the same tactics in the run-up to the 2016 referendum (on Brexit) as it sought to frighten the nation with the Russian threat in parallel with urging the electorate to support Britain’s continued membership of the EU.”

May, who won the campaign for the position of the Tory leader after Cameron’s resignation, “retained Russophobia as an instrument for promulgation of political initiatives,” Godovanyuk said.

“She convinced parliament in July to support an upgrade of the British nuclear shield, claiming Russia and North Korea were posing a tangible nuclear threat,” she added.

Along with it, “Prime Minister May has sent signals on her plans to continue political dialogue with Russia,” Godovanyuk said. “In the course of a conversation with the Russian President she reached agreement on establishing political dialogue between intelligence services in the field of flight security.”

Over the first 100 days of performing the duties of the Prime Minister, Theresa May addressed an annual conference of the Conservative Party in the capacity of the party leader, made several foreign visits, took part in the EU and G20 summits, and held first talks with Russian President Vladimir Putin and US President Barack Obama.

However, the Tories maintain continuity of their foreign policy course, Godovanyuk said. “What we’re witnessing today is a new upsurge of tensions between Russia and the West around Syria,” she said. “Britain, the closest ally of the US remains the biggest critic of Moscow’s course among the EU nations and its rhetoric is as tough as always.”

“There are no signs today of a possible softening of the rhetoric and signals for the settling of relations with Russia will come from London,” Godovanyuk said. “The two sides occupy radically different positions on the Syrian problem, which has moved to the forefront of the international agenda.”