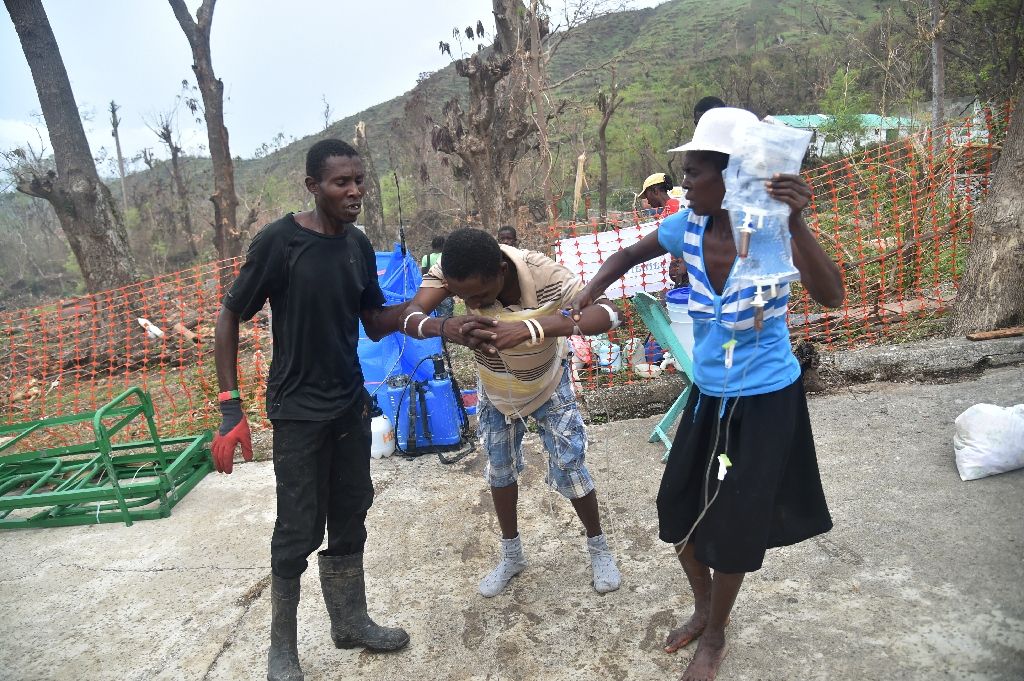 The rains inundating their ruined homes are no longer the biggest concern of the long-suffering people of Randelle: cholera is tearing through the isolated Haitian mountain village at devastating speed.

“Cholera is eating us alive: my neighbor was the first to fall ill, then it came to our house, infecting my husband and daughter,” said Andrise Lubin as she stood before her badly damaged home.

The road that allowed villagers to reach the coast in a half-hour was swept away by a river still swollen after Hurricane Matthew barreled through early this month, bringing torrential rains.

To reach Randelle now, in the southwestern commune of Chardonnieres, requires a three-hour walk and several difficult river passages.

Lubin, whose foot was injured in the hurricane, got a friend to help her ailing husband and daughter make the difficult trek to seek care. Desperate, and with nothing to eat, she says she almost wishes she would fall ill next.

“Cholera can come to me, my stomach is empty — I would be better off in town than here,” says the woman in her 40s with a fatalistic shrug.

Ill villagers, housed temporarily in makeshift huts of leaky corrugated metal and plastic tarps, cram together onto the porch of Randelle’s small clinic as they await care.

The pages of its registry book have been rapidly filling up: since the hurricane, cholera has afflicted nearly 300 people.

Even before Matthew, Haiti was facing the worst epidemic of cholera in the world, with some 500 cases a week of the potentially-fatal bacterial infection.

Spread largely through contaminated food and water, cholera was brought into the country by Nepalese peacekeepers after the devastating 2010 earthquake, the United Nations has acknowledged.

Head nurse Marguerite Bernardin is utterly exhausted as she and two colleagues examine the unending flow of patients from Randelle and the surrounding mountains. She lost everything in the hurricane, but that is not her priority.

“We could use beds for the patients,” she said, pointing to an elderly man lying on a thin stretcher set directly on the saturated ground.

After two miserable weeks, the NGO Samaritan’s Purse provided some unexpected relief when it was able to open an emergency cholera-treatment center. Its beds are already full.

“Two extra tents are going to arrive today, so we should be able to treat at least 20 patients,” said Steve Averly, an urgent-care physician.

“It is difficult enough to get into the mountains here,” he explained, “so for patients with cholera it is very complicated to come down the hill to get care.”

“The closer we can get to the source, the more effectively we can save and help people,” he said, while tending to a young girl.

With Randelle still a scene of ruins — fallen tree trunks litter the landscape — the NGO chose an elevated site off to one side for its temporary clinic.

Inhabitants carrying the sick on their backs — and holding intravenous-drip bags high — thus have to make their way through a stretch of uneven terrain to reach the medical center.

The treatment center’s isolated location in the mountains imposes its own set of daunting logistical challenges.

“Mules are the most effective means of transport for bringing in equipment,” the doctor said with a smile. “They are the most ancient of technologies, but they work.”

Still, if only there were good weather and sufficient money to pay for them, helicopters could land in the village.

In the absence of help from an overwhelmed Haitian government, international aid efforts have been life-saving, said Romelus Caldo, an elected official with the town’s assembly.

“I remember Saturday, October 8,” he said grimly, standing drenched under an intensifying rain. “I saw six people die of cholera in the clinic.”

“The central government has not responded to my demands, so do you think the voices of ordinary inhabitants are being heard?” he said.

Two weeks ago, the river carried away Caldo’s home.