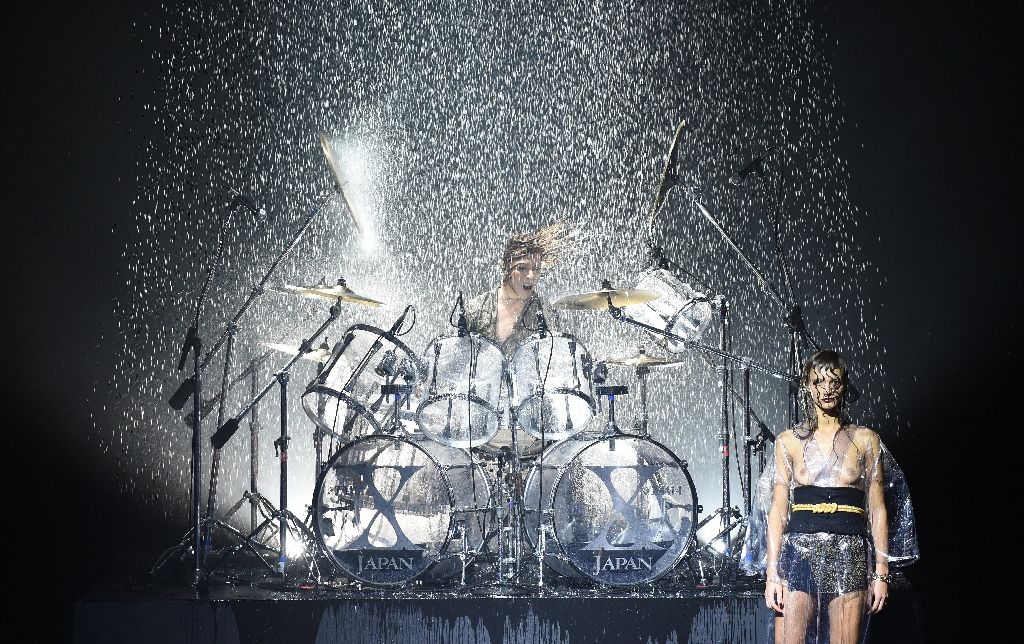 It may not be high fashion to purists, but such is the fame of the dyed-blonde, androgynous-looking co-founder of rock band X Japan that he opened the latest edition of Tokyo’s twice-yearly style bonanza.

Music fans, the Japanese celebrity press and the fashion pack crammed into a catwalk show that opened with a flamboyantly dressed Yoshiki seated at his trademark transparent baby grand for a classical-inspired duet with a female electric violinist in black stilettos.

To pondering chords on the piano, models dressed in Yoshiki’s collection of traditional style kimonos — albeit crafted in red leather to mimic snake skin or metallic golds and silver — sashayed, or even shuffled, down the runway.

Bolts of lightening flashed overhead and storm sound effects crashed over the sound system as black curtains parted in the middle of the catwalk to reveal Yoshiki standing over a drum set.

He carefully removed his overcoat, then powered through a high-energy drum solo as Western models appeared in strapless, kimono-inspired cocktail dresses that grazed the thigh in chessboard black and white, zebra print with a dalmatian-print flourish, or pink and red florals.

Rain poured down from the ceiling as models with crimped hair stuck in serpent-like strands gingerly navigated the soaking runway in vertiginous stilettos.

Yoshiki played drenched to the skin in a pussy bow blouse.

The climatic look was a transparent plastic kimono that left little to the imagination — exposing the model’s bare breasts and saving her blushes only with a patterned micro, under-garment at the waist.

The rain, Yoshiki explained to reporters, was inspired by Alexander McQueen, the late British designer considered one of the greats of his generation, who soaked his own runway in 1998.

A musician who transcends both the rock and classical worlds, and was raised by parents in the kimono business, Yoshiki said his passion was to open the eyes of the world to the traditional Japanese garment.

“After I moved to Los Angeles 20 years ago, I really understood the importance of Japanese culture,” he explained.

“If I’d stayed in Japan, I wouldn’t have realised there are so many Japanese restaurants around the world. I think that is really good, and I want kimono culture to be same as Japanese food.”

The music that accompanied the show, he said, was pure improvisation — so busy had he been with a music festival until recently.

“When I played, I focused on the kimono as having the main role,” he said, his blonde hair falling in soft waves around his face, lips accentuated in pink lipstick.

Kimonos for men and children are his next dream, he said.

Sponsored by online retailer Amazon this season, Tokyo Fashion Week is in its 12th year. Between Monday and Saturday it will showcase around 50 up-and-coming designers with established brands.

It attracts 50,000 visitors to the Japanese capital each season.