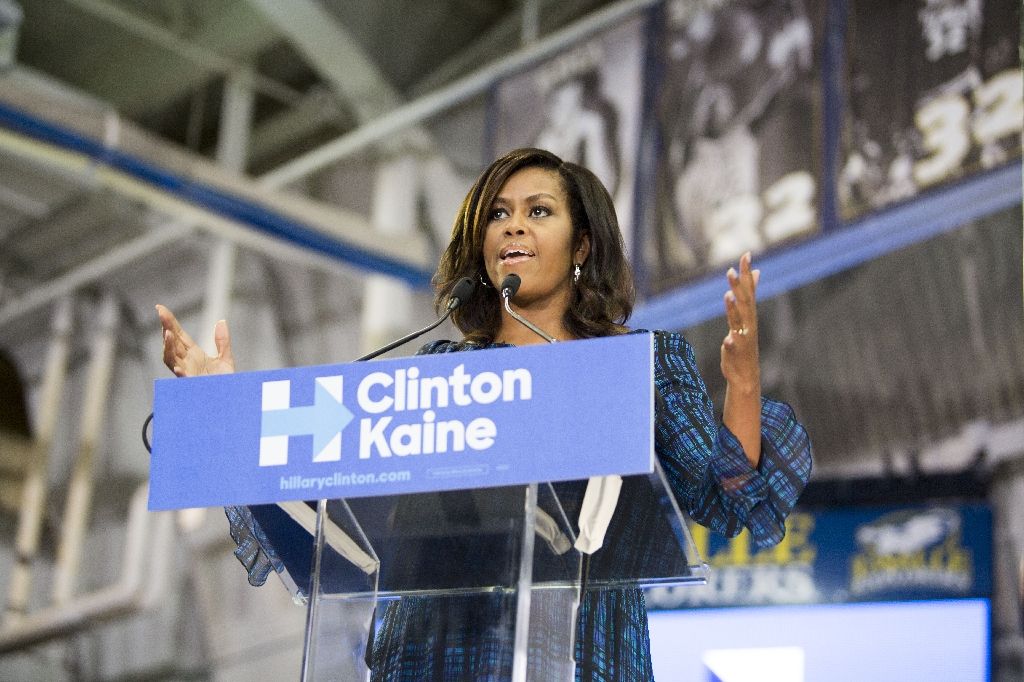 Michelle Obama has said she looks forward to a quieter, calmer life after politics. But on Thursday she hit the campaign trail with a vengeance. Her voice quivering with emotion, the wildly popular first lady launched a blistering attack on Donald Trump’s sexually aggressive talk about women, calling it “disgraceful,” especially coming from a man running for president.

“It has shaken me to my core in a way that I couldn’t have predicted,” she said.

Obama, a Harvard-educated lawyer who has largely shunned the political limelight to focus on education and health issues, galvanized a rally for Democrat Hillary Clinton in New Hampshire with an impassioned plea to “stop this madness.”

Her comments came as Trump fought back against a cascade of allegations of sexual misconduct, which surfaced days after a video of him boasting that his fame allowed him to grope women with impunity.

The Republican nominee has dismissed the tape’s contents as guy talk.

“This was a powerful individual speaking freely and openly about sexually predatory behavior. And actually bragging about kissing and groping women.”

“It doesn’t matter what party you belong to — Democrat, Republican, independent — no woman deserves to be treated this way. No one deserves this kind of abuse.”

She lashed out at what she called Trump’s “cruel” and “frightening” attitude towards women, while deliberately never using his name.

“This is not normal. It is not politics as usual. This is disgraceful. It is intolerable.”

‘Not how decent human beings behave’

Obama is arguably one of America’s most popular public figures. She had a favorable rating of 64 percent in a Gallup poll released in August.

In addition to her work fighting child obesity and promoting education, in her time in the White House she has achieved the status of a pop star — stylish and poised, articulate but down to earth, both fun and funny.

After the Obama daughters were voted last year as being among Americas’ most influential teens by Time magazine, Obama said, “They’re not influential. They just live here.”

Mrs. Obama makes regular appearances on late night TV, “Mom dancing” or singing karaoke, has handed out an Oscar award, and appeared on the covers of magazines such as Vogue, Ebony and Time.

She has also joined President Barack Obama on the campaign trail to help Clinton in her bid to become the first female American president.

Her appearance Thursday came at a critical juncture: with Trump’s presidential bid teetering after claims from at least six women surfaced, alleging that he had made unwanted sexual advances towards them in the past, including groping and kissing.

The Manhattan billionaire said Sunday in his second presidential debate with Clinton that despite the lewd 2005 conversation captured on video, he had never sexually assaulted women.

Trump has vehemently denied the claims since reported by various US media outlets including The New York Times, NBC and People magazine, slamming them as politically-motivated and threatening to sue the Times.

“The phony story in the failing @nytimes is a TOTAL FABRICATION,” Trump posted on Twitter.

But Michelle Obama nevertheless attacked him with a vengeance.

“The men in my life do not talk about women like this,” she said. “This is not how decent human beings behave and this is certainly not how someone who wants to be president of the United States behaves.”

She championed Clinton as a unifying force and said only she could help “heal the wounds that divide us.”

Clinton tweeted right back at her: “@FLOTUS, I’m in awe. Thanks for putting into words what’s in so many of our hearts. -H”

The first lady issued a rallying cry for women to fight Trump at the ballot box.

“While our mothers and grandmothers were often powerless to change their circumstances, today we as women have all the power we need to determine the outcome of this election,” Obama said to cheers.