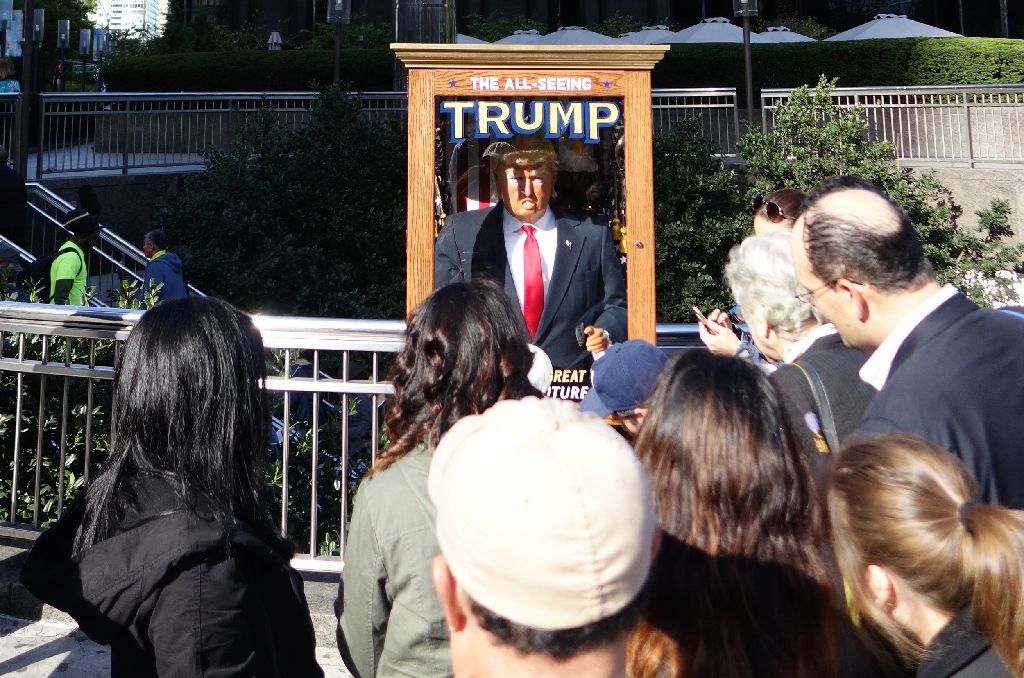 There’s little love for Donald Trump in his hometown these days, so New York has been both tickled and repelled by a fortune-telling, Trump-in-a-box mocking his offense-dishing campaign for president.

“Not every woman is a dog — only the fat, disgusting ones. And don’t worry: in the future, when I am president, I’ll do something about it. We are gonna make America SEXY again!” boomed the doll near Central Park on Thursday.

The Trump-in-a-box has been made to resemble the Zoltar machine made famous in the 1988 Hollywood movie “Big” starring Tom Hanks.

Push a button and it dispenses written fortune slips. “If you wish to see your future… build a fallout shelter,” said one in a nod to fears whipped up by the Democrats that Trump cannot be trusted with the nuclear codes.

The Manhattan real estate billionaire and former reality star is crashing in the polls against his Democratic rival Hillary Clinton, following the emergence last weekend of a 2005 tape in which he boasts of groping women.

Republican lawmakers have rushed to distance themselves from a candidate they now fear could wipe out their majority in the Senate on November 8.

But for 17 months Trump has inflamed America with a divisive campaign, calling Mexicans rapists, promising to build a wall on the southern US border, and threatening to ban Muslims and deport millions of illegal immigrants.

He has denounced both free trade deals and US infrastructure, promised to “make America great again” with outlandish pledges.

“During my presidency, I break off all trade with the Chinese. I have no choice. How can I negotiate with China when I can’t even understand a word they’re saying? It’s like, ‘Hello? Speak English,” the doll said.

Professing his “love” for the Mexican people, the doll then promises to pack them onto trains like “cattle” — drawing parallels with the Nazi Holocaust.

“My trains are so much better than the ones the German used,” said the doll, its red eyes glowing.

The machine has been popping up in various locales around New York. Around two dozen passersby gathered around Wednesday outside Central Park, taking selfies and pressing for fortunes.

Molly Moulthrob, 44, who works for a tech company in Texas and who does not support Trump, told AFP she thought the Zoltar machine was “scary but true.”

“It’s super funny specially in the political climate now, when everything is very nasty on both sides,” she said.

But others focused more on the political danger they feel from the real Trump.

“It’s horrifying,” said Tobin Rothlein, a jogger in his 40s from Brooklyn.

“I don’t think it’s funny. I think people have to stop laughing at it and actually listen to what people are saying — more people realizing what’s at stake,” he added.

“It’s very sad he’s a candidate and what he stands for” agreed Loretta Wroble, 72, visiting for the day from Connecticut.

“In America we really need to be looking what we are really doing and who we are as a people and what’s important to us,” she added.