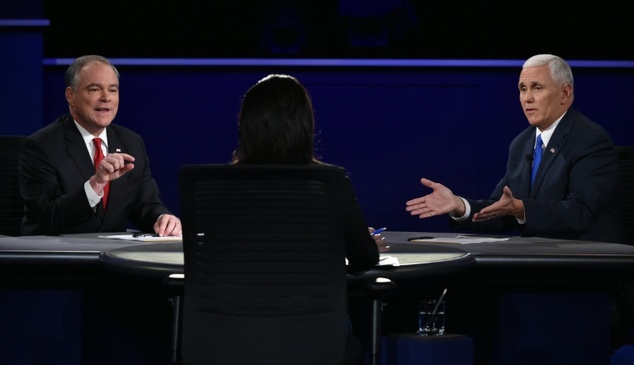 The two candidates for US vice president launched bitter attacks on the reputations and policies of Hillary Clinton and Donald Trump Tuesday during a fiery debate five weeks from Election Day.

Democrat Tim Kaine and Republican Mike Pence sought to highlight their capabilities as the men who could be a heartbeat away from the presidency, but essentially they were on stage fighting a proxy war for their running mates scrapping for every vote on November 8.

Polls show Clinton gaining in the wake of a punishing week for her Republican rival Trump, who has been hammered by controversies over his taxes and his treatment of women.

Kaine, a senator from Virginia, took aim at Trump from the beginning, saying the idea of the brash Republican as commander-in-chief “scares us to death.”

Kaine sought to portray himself as a deeply experienced local, state and national politician who would be the “right-hand person” for Clinton, whom he described as trustworthy and more than capable in the role of commander in chief.

An imperturbable Pence, governor of Indiana and a Christian conservative, calmly shot back.

“You would know a lot about an insult-driven campaign,” he said, highlighting Clinton’s relentless criticism of Trump and how she painted half of her Republican rival’s supporters as “deplorables.”

“We see entire portions of the world, particularly the wider Middle East, spinning out of control. The situation we’re watching hour-by-hour in Syria today is the result of the weak foreign policy that Hillary Clinton helped lead in this administration and create.”

For many Americans, the debate was their first prolonged exposure to the men who would be next in line for the presidency if their side wins in November.

‘Shooting himself in the foot’

Pence is as modest and polite in style as Trump is brash and insulting, while Kaine, who also has a calm style on Capitol Hill, appeared to take a more aggressive stance than Pence in attacking the rival camp.

He sought to drill down on issues that appeared to have given Clinton a bump in the polls demanding Trump release his tax returns and mocking the White House hopeful for some of his impulsive Twitter missteps during the campaign.

“Donald Trump can’t start a Twitter war with Miss Universe without shooting himself in the foot,” Kaine said, referring to Trump’s rants against Alicia Machado, a beauty queen whom he called “Miss Piggy” when she gained weight after winning her crown.

The two men repeatedly talked over each over as they clashed about Trump’s failure to release his tax records, social security, how to handle an aggressive Russia, and the prospect of mounting debt, forcing moderator Elaine Quijano to intervene.

Kaine, 58, and Pence, 57, are about 10 years younger than the presidential nominees. They each have sons serving in the US military, and they are seen as more religious than Clinton and Trump.

Trump has suffered from what has been seen as a mediocre performance in his first debate with Clinton, revelations of a $916 million loss in 1995 that may have meant he paid no taxes for several years and criticism of his demeaning treatment of Machado.

Pence, who spent a dozen years in Congress, is known for his discipline. He prepared intensively for the debate, unlike Trump, who did little to practice for his September 26 encounter with Clinton.

Trump, who live tweeted throughout the political showdown, posted that “Mike Pence won big. We should all be proud of Mike!”

Clinton countered on Twitter that she was “Lucky to have a partner like @timkaine who stood up for our shared vision tonight — instead of trying to deny it.”

Pence stressed that a Trump administration would want the United States to “use military force to strike the targets of the Assad regime” if Russia continues its involvement in “this barbaric attack on Aleppo.”

But the Republican clearly distanced himself from Trump’s praise of Russian President Vladimir Putin, hailing the US system as “superior to the crony corrupt cabal system in Russia in every way.”

Kaine hammered away though, insisting that “Donald Trump, again and again, has praised Vladimir Putin and it’s clear that he has business dealings with Russian oligarchs.”

“Trump has business dealings with Russia that he refuses to disclose,” while “Hillary Clinton has gone toe to toe with Russia.”

Pence assailed Clinton while pushing a larger theme of change — something many Americans say they want — including his call for “repealing Obamacare lock, stock and barrel.”

Since the first presidential debate, support for Clinton has risen to 44.3 percent against 40.6 percent for Trump, according to an average of recent national polls compiled by RealClearPolitics.

A second round of presidential debates is set for Sunday. The format will be a bit different, with candidates fielding questions put to them by people in the audience.