Home » News » Evangelicals: A true test of faith in Trump 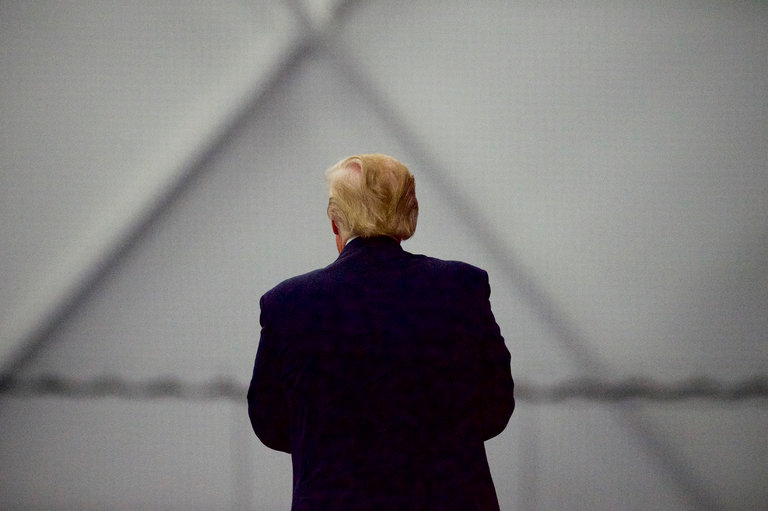 Evangelicals: A true test of faith in Trump

“Boy did I do well with evangelicals, right?”

A boastful Donald Trump basked in the adulation of Christian conservatives at a rally this week in Council Bluffs, Iowa as he recalled their surprisingly strong support in the hard-fought Republican presidential primaries.

He will need them again come November 8.

Evangelicals form a powerful voting bloc that the billionaire Republican must win by significant margins in key swing states if he is to defeat Hillary Clinton at the ballot box.

Polls show many religious conservatives now favor Trump, even after many backed Ben Carson or Ted Cruz, candidates with stronger faith pedigrees, in the primary battle.

But in a series of interviews, several evangelical voters and leaders told AFP they hold deep reservations about the real estate tycoon and his combative rhetoric, personal character and morality.

Trump, who is Presbyterian, is twice divorced, a casino magnate who made millions on a gambling empire. He has called for a ban on Muslims entering the country, and stands accused of demeaning women and cheating employees — hardly the qualities of humility and virtue sought by faith-based voters.

“It’s a quandary for evangelicals, there’s no question about it,” acknowledged Mike Hamlet, who has been a pastor at First Baptist North Spartanburg, in the southern state of South Carolina for 32 years.

In Trump they see a deeply flawed man, but one who nonetheless hews more closely to their Biblical values, in particular protecting the unborn, than does Democrat Clinton.

Churchgoers on a recent Sunday in Spartanburg, a white evangelical stronghold, hesitated when asked about Trump, but said ultimately they would support him.

“I don’t think that my standard candidate is on the ballot, but I’m going to vote to the right,” said Pam Dean, 59, who works with special needs children.

There are about 62 million born-again or evangelical Christian Americans, according to Pew Research Center.

A large majority of white evangelicals support Trump, but many say they will cast their vote against Clinton rather than as a full-throated Trump endorsement.

“I think that is as much because of Hillary Clinton’s opposition to Biblical values,” Pastor Hamlet said. “We’re not going to have any candidates that are more pro-abortion than she is.”

Clinton, 68, is a Methodist, and has cited the teachings of Jesus while campaigning.

But Dean simply does not trust her. “She is for abortion,” the worshipper said. “I have not seen her Christian walk.”

Evangelicals also largely align with the Republican Party on most issues, including national security, immigration, taxes and size of government.

But there is little unbridled enthusiasm for him among evangelicals, and the Trump camp is worried that like in 2012, many may choose to stay home on Election Day.

“I don’t know what I’m going to be doing as an evangelical voting in November,” said Levi Fox, 25, a student at Christian conservative Bob Jones University (BJU) in nearby Greenville.

“A lot of my peers don’t want to vote” because they see Clinton and Trump as “the difference between an unhinged candidate and an unethical one,” Fox said.

In 1999 Trump said he was pro-choice. Today he claims he is pro-life, but the way he trumpets his faith sometimes raises eyebrows.

In July, he appeared to mock holy communion, saying that “when I drink my little wine… and have my little cracker, I guess that’s a form of asking for forgiveness.”

Evangelical participation may not decide the outcome in conservative South Carolina, which has not voted Democratic since 1976.

But in neighboring North Carolina, Virginia, Pennsylvania and critical battleground Ohio, evangelicals could prove Trump’s savior, or his undoing.

“I think the jury is still out for some people, but personally when I look at the alternative, he is the only choice for me,” said Alexia Newman, director of the pro-life Carolina Pregnancy Center.

“If we go the other way and support Mrs. Clinton… we know that it is going to be abortion on demand, we know it’s going to be marriage between anybody.”

Trump routinely appeals to evangelicals. But he has also reprimanded them for staying home in 2012 and contributing to Mitt Romney’s defeat to Barack Obama.

Evangelicals in July were rallying behind Trump more than they supported Romney four years ago, according to Pew.

Still, “I don’t think he has anything locked up,” 76-year-old Walter Lapp of Boiling Springs, near Spartanburg, said of Trump.

If evangelicals fail to come out in 2016, “shame on us,” he said. “We have a responsibility, not just a right, to be able to vote according to how God leads us.”

BJU history professor Carl Abrams acknowledged he might be breaking with the evangelical trend.

“At the moment I would not vote for him, because he does not pass that most important test of love your neighbor as yourself,” he said, referring to Trump’s staunch anti-immigrant position.

The pregnancy center’s Newman said she believes Trump has “evolved” toward Christian positions on abortion and marriage.

“I’m going to trust that he’s had an epiphany,” she said.